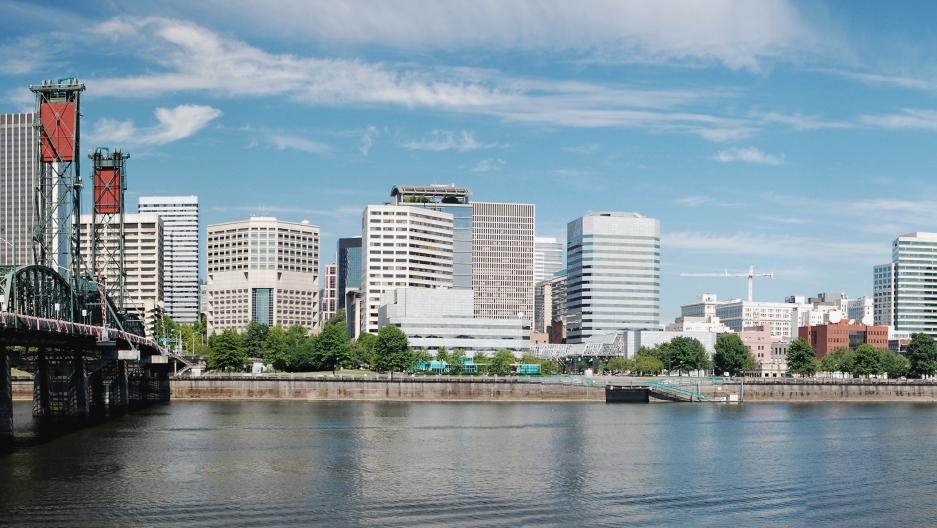 A panorama of Portland, Oregon.

The West Coast is due for a massive earthquake. Experts say it’s not a matter of if, but when. When preparing for a natural disaster, training matters. But can you train an entire city?

This summer, officials across the Pacific Northwest simulated their disaster responses. Dozens of municipal, state, and federal agencies all mobilized their emergency teams in the largest event of its kind.

Firefighters and national guardsmen checking for bodies in a pile of crumpled cars at the base of a tower in the city of Portland. They pulled a dummy out of one of the cars — this was one of the few survivors of this simulated earthquake emergency. They strapped the dummy onto a backboard and hooked it to a set of ropes hanging from the tower. The scene is designed to mimic one of many disastrous situations that would follow a major quake.

“Basically, we have an overpass that’s crashed down,” says Matthew Silva, one of the officials overseeing the operation for the Portland Fire Department. “We’ve got three vehicles down there and multiple victims. They’re trapped at the bottom of this ravine, and at the bottom of the overpass.”

To get to the pileup, the first responders had to rappel down from the tower and then hoist the patient's back up to safety.

Across town, a dozen city officials gathered inside a conference room at Portland’s Emergency Coordination Center. They’re wearing colored vests that correspond to their roles in responding to the biggest emergency Portland may ever see. Their job is to review the situation and direct the next phase of the simulated emergency response.

Right off the bat, Planning Chief Marty Shaw notes they’re missing a green-vested member of the finance team, and the electronic whiteboard isn’t working. But that’s the least of their worries. He turns to police Lt. Ashton Brewer for a situation report.

“Aerial reports show widespread damage throughout the region,” says Brewer. “Active fires, hazardous materials, and mass casualty events have been reported throughout the city. Streets and roadways are inaccessible in most areas due to down power lines, trees, road signs, abandoned and damaged vehicles and building debris.”

Remember, this is only a drill. But the situation is bleak: Almost all the bridges over the Willamette River are down, along with the phone lines, water and power. Hundreds of buildings have collapsed. And many streets and sidewalks are buried under several feet of debris. Emergency responders can’t get to many of the worst hit areas. Aftershocks continue to cause additional damage.

To make matters worse, the group finds they don’t even know how many city staffers are available to respond to all the emergencies. They add a new objective to their list: Identify all available city personnel and equipment in the next 12 hours. After the exercise wrapped up, officials reviewed what they learned.

“Many people who are the most trained responders will likely not be able to get to work and get to the emergency coordination center,” says Carmen Merlo, the director of the Portland Bureau of Emergency Management. She says one of the big lessons is that the city will need a lot more volunteers.

“One of the things we have to do is train a larger number of people to make sure we have some bench depth,” she says. “We really can’t rely on one cadre of people being exceptionally prepared.”

The city has a vision for how residents can sub in for first responders when the big one hits. At an upscale retirement home, volunteer program developer Ernie Jones is training new recruits to set up and operate neighborhood emergency tents.

He’s holding a UHF radio, which could be their only line of emergency communication when the phones go down.

Portland officials have hidden dozens of these radios along with other essential supplies in emergency equipment caches all over the city. Jones says they’re counting on volunteers to check on their neighbors and use these supplies when the time comes.

“We know from history 94 to 98 percent of people who are helped, saved, or rescued after a disaster are helped, saved, or rescued by their neighbors — not by anybody else, not by firefighters, police, or other professional first responders,” Jones says. “That’s not because firefighters and police and others don’t want to help. It’s because there’s not enough of them."

Jones worked for FEMA during 55 disasters across the US. He trains volunteers to be ready for a harsh reality.

“We’ve got 30 or 31 fire stations in Portland, and the firefighters will tell you quite bluntly a big calamity happens if they can get their fire trucks out of the station what they’re going to be doing is driving down the street in their fire management area — the area they’re responsible for — and they are going to be seeing where the greatest need is. That’s going to mean passing people on the street waving saying I need help,” he says.

Merlo says the city’s neighborhood volunteer program got a boost from the Pulitzer Prize-winning article, “The Really Big One,” that ran in the New Yorker last year.

“The interest has grown exponentially,” Merlo says. “We now have over a 1,400-person wait list for these classes.”

The city now has about 1,000 active volunteers. But it needs 10 times that amount to prepare the city’s neighborhoods for the worst case scenario.