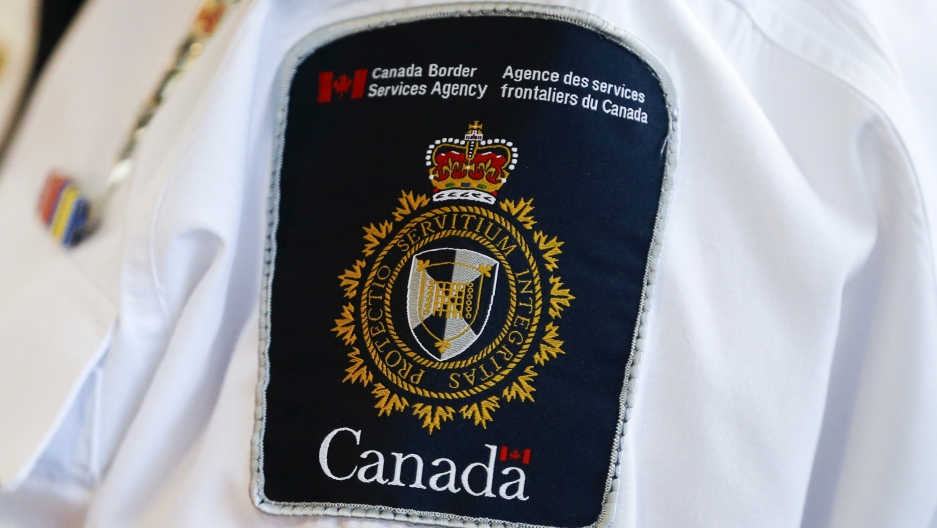 A Canada Border Services Agency logo is seen on a worker during a tour of the Infield Terminal at Toronto Pearson International Airport in December 2015.

"Canadian laws are different than US ones," the Canada Border Services Agency said in a statement Monday.

"Non-restricted firearms can be used for hunting purposes and protection against wildlife in remote areas."

But, it added, the "use of firearms for personal protection, or protection of property is not deemed a valid purpose to import firearms into Canada."

The announcement comes on the heels of two separate incidents in which Texas retirees denied carrying weapons at a border checkpoint in Saint Stephen, New Brunswick.

A search of their vehicles uncovered several handguns, a shotgun and loose ammunition, which were seized.

The two tourists were also fined more than $775 and kicked out of Canada, along with their wives.

In the first six months of this year, 413 guns were seized at the border — both from smugglers and gun lovers. The figure is up from 386 guns seized during the same period in 2015, according to government figures.

Authorities have linked recent spikes in violent crimes to the smuggling of handguns and other prohibited weapons from the United States.

US gun culture is also a source of derision in Canada.

Canada only began arming its border guards in 2006.

South of the border, Republican presidential nominee Donald Trump provoked new debate this month over gun rights when he appeared to suggest that "Second Amendment people," who view gun ownership as a constitutional right, could take dislike for his Democratic rival Hillary Clinton into their own hands.