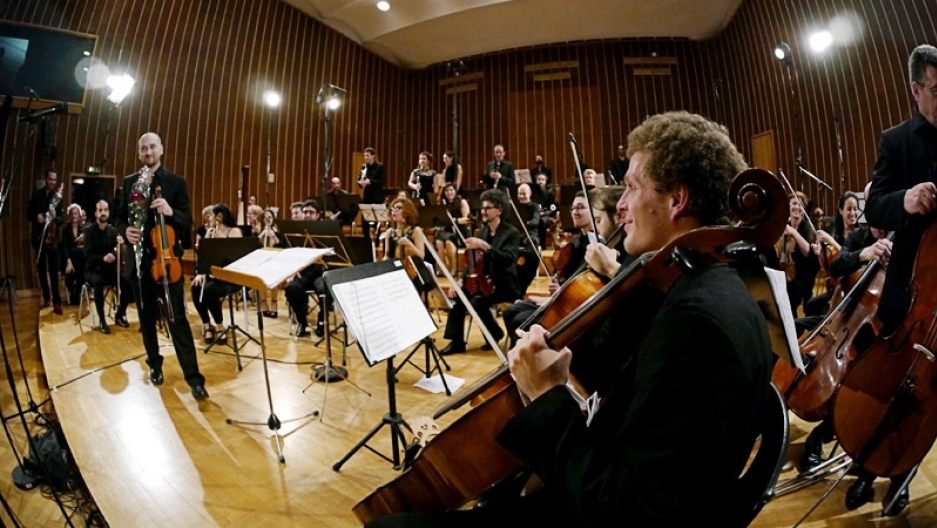 When we think of Syria, we usually think of war, misery and desperate refugees. Classically trained bassist Raed Jazbeh is trying to change that image.

Jazbeh fled Syria three years ago for Europe and was granted asylum in Germany. His fellow musicians were also scattered all over Europe by their country’s civil war. This is the story of his effort to find his former colleagues and preserve a piece of Syria’s musical culture.

Raed Jazbeh is a hard guy to reach.

I tried for quite awhile, but eventually got lucky — I met one of Jazbeh’s colleagues, a Syrian cellist, at a music festival. He gave me Jazbeh’s phone number. And a few international calls later, we arranged to meet in Berlin.

Jazbeh, who founded several orchestras in Syria, is from Aleppo, but has lived in Bremen, Germany since 2013.

It was during a 2013 tour in Germany with an Arab youth symphony that friends convinced Jazbeh it wasn’t safe to go home. He stayed, and ended up at a refugee center in Bremen.

“When I arrived in Germany, I noted that a lot of Syrian musicians live in Germany and Europe,” Jazbeh remembers.  “So I said OK, we can start a Syrian orchestra in Europe.”

He started trying to find his colleagues from the High Institute of Music, Syria’s only conservatory. Back home, it had been a tight community — pretty much all the classical musicians there knew each other. But finding his friends again in Europe was tough. Everyone was scattered. Like so many Syrians, a lot of Jazbeh’s colleagues had to flee the country in a hurry, leaving pretty much everything behind.

“So I ask myself how I can contact the musicians and I don't know their emails or phone. So then I contacted them by Facebook, and found them, and some of them mentioned they live in Europe, and they said, "Yes, I live in Europe now, I can play with this orchestra,” Jazbeh said.

Last September, Jazbeh managed to assemble enough Syrian musicians to perform a concert in Bremen — the first concert of the Syrian Expat Philharmonic Orchestra, or SEPO.

”It was fantastic moment for all of us,” he recalls.

“We’re 30 Syrian musicians from all over Europe, and we’re sitting in one hall. And we feel that we are in Syria! Because we see Syrian faces. For sure, we lost many things in our homeland, friends, families, study, work, home, but in this orchestra ... you get feelings that you are in Syria now.”

I asked him how he pays for the orchestra.

”The most difficult thing about this orchestra is the funding,” he says.

“You have to cover the travel for musicians from many, many cities, accommodations, the rehearsal place, music hall for concert — so always we try to find a sponsor to support this concert.”

The orchestra is more of a vision than a reality. Many of the musicians are playing on borrowed instruments. When they meet up to rehearse and perform, they sleep in people’s homes, not hotels. But encouraged by support from German cultural and refugee aid organizations, Jazbeh’s determined to expand his project.

SEPO’s first concert in Bremen was sold out. The group actually ran out of encores and had to play one piece over again for the enthusiastic crowd.

These days, however, after several high-profile attacks, people are increasingly worried about the refugees in their midst. One German musician I spoke to said the country shouldn’t be supporting additional cultural organizations — like a Syrian orchestra.

But Jazbeh is not easily discouraged. He’s focused on trying to save a piece of his country’s 7,000-year old culture.

“We have a lot of destruction in Syria, so maybe we can save the music and culture by this symphony orchestra,” he says.

Since SEPO’s first concert, it has also performed in Switzerland, and Jazbeh even got a call from the Berlin Philharmonic.

“This is very funny,” Jazbeh says, laughing. “The organizer from Berliner Philharmonie told me, ‘I tried to contact you for six months!’

The organizer invited them to open the Philharmonic’s current season with an open-air concert in Berlin on Saturday.

Jazbeh says he is thrilled.

“I hope in the future, we can change this project to real work for the Syrians, to change their situation from refugees to professional musicians.”