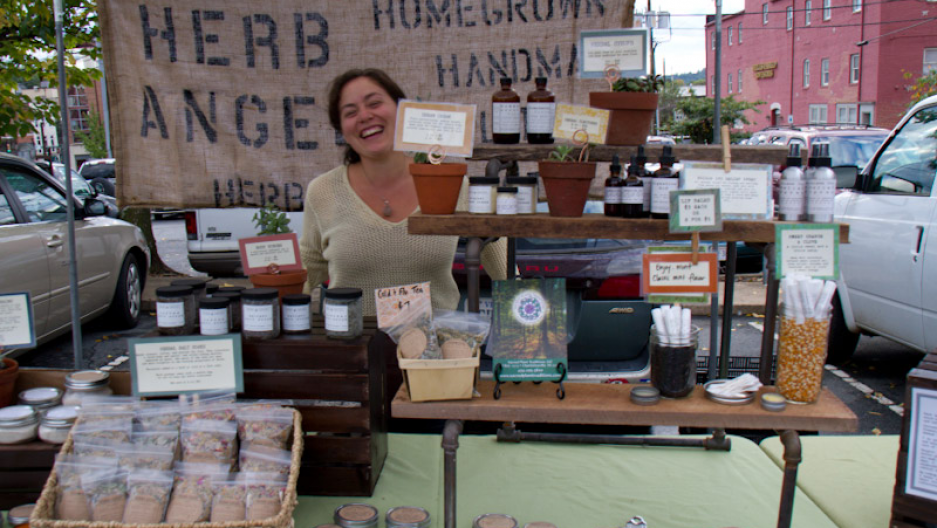 Angel Shockley is one of the women farmers Audrey Levatino profiles in her book. Shockley makes and sells herbs, teas, tinctures and salves through her business, Herb Angel.

Women farmers are increasingly challenging traditional, male-centric notions about farming in the US, and a recent book aims to encourage more women to join the movement.

The book is called "Woman-Powered Farm: Manual for a Self-Sufficient Lifestyle from Homestead to Field." As its title suggests, it is a handbook for women contemplating the jump to farming.

“Women were coming up to me at the farmers’ market and asking about what I did,” author Audrey Levatino says. “Many of them wanted to know how to get into farming and growing things themselves, and wanted advice and instructions on how to get started. ... When I first started out, there wasn't just one book with the information that I wanted — I had piles and stacks of books. I started thinking about gathering all this information into one resource, a book just for women that addresses the concerns and interests that women farmers have.”

One of the unique challenges women face is the sheer physical difficulty of many farming tasks.

“Men are built differently than women, so there's definitely going to be a bit of a different approach in terms of facing heavy-duty tasks,” Levatino says. “We really need to approach tasks with more creativity about how we can use our lower body strength and spare ourselves from injury — perhaps using wheels whenever we can. Instead of lifting up heavy buckets and carrying them, put them on a garden cart and wheel them over to where they need to be.”

Many companies are coming out with tools optimized for women's strength, Levatino says: Shovels with a wider foot base and a differently-shaped handle; an easy-start, lighter-weight chainsaw. In most cases, it’s all about leverage and making gravity work for you, rather than against you, Levatino says.

Women often get into farming in order to provide the best, healthiest, local food they can for their families, Levatino says. So while women grow a lot of different things, in many cases their main crops are healthy, seasonal foods. “They know exactly where they came from, so that their children and their husbands and their neighbors can have the best food possible,” she says.

Levatino says as she got further into her research and interviewed women farmers around the country, that “women are just amazingly creative: They grow herbs and other medicinal plants to make teas, salves and tinctures. When women raise livestock, they tend to raise smaller animals that are a little more manageable, and sometimes it's for fiber — sheep and llamas and alpacas — other times it’s for milk, such as using goats to make cheese.”

Levatino also found that women have particular qualities that lend themselves well to farming. “A common analogy that would come up when women were talking about being a farmer and the work of farming was having children,” Levatino says. “One of the qualities that most women have is being very nurturing, and that's a big part of farming, not just for livestock, but also for your plants and vegetables. Paying attention and noticing when something starts to go wrong.”

“Women are very good at having that sixth sense of, ‘that’s not quite right,’” she continues. “Being able to catch [the onset of] diseases and bug infestations sooner rather than later, for example. I’m not saying that men aren't good at that, but that's just something that I noticed in talking to women that came up quite a bit.”

Levatino didn't have much of a farming background when she started, so at first she struggled. “I'm very much a trial and error and go out and figure it out yourself kind of person, which meant that I made a lot of mistakes,” she says. “That was another reason I wanted to write this book and share it with people.”

But the main resource any farmer needs is other farmers, Levatino says. “You’ve got to go out there and find the people in the community who are interested in what you're interested in, who have been farming and who can be mentors, because you're going to need help, and that community of farmers is going to be a really strong support system for you.”

The bottom line? Being a farmer is really tough, Levatino says. “You have to be self-motivated, have your own business plan. It’s not just doing the farm work, it's doing the accounting and planning out your succession plantings and your crops for the year — and not just one year, maybe two years. And having an alternate plan, because there's always going to be a weather incident or some sort of crop failure or a market's going to fall through. And you have to know your market, you have to do the research, you have to stay innovative and on top of the game.”

Levatino says she wrote her book to encourage and help inform women who are thinking about going into farming, but aren't quite sure or who doubt they are capable of doing it.