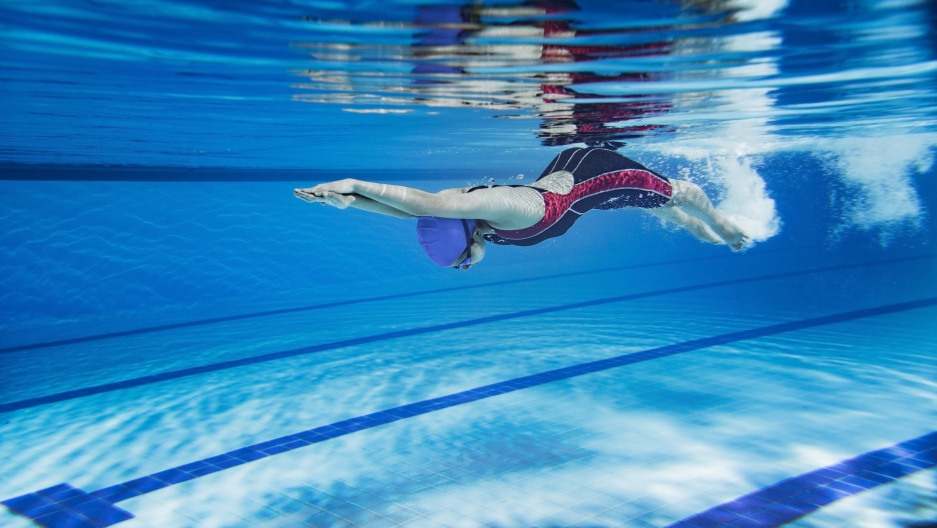 A swimmer uses the "fish kick."

To propel themselves through the water, swimmers use different strokes to control drag and lift. But which stroke is the fastest? Some experts have pinpointed the fish kick — a version of the dolphin kick — as the speediest swimming style.

Why? As swim coach and engineer Rick Madge explains, it's all about fluid dynamics.

“The fish kick is usually what they call dolphin kick, [but] on the side,” Madge says. “And it's called that because that's more like what fish do, as opposed to the up and down motion that we've been watching for the last 20 or 30 years in underwater swimming.”

These swimming strokes take advantage of the speed a swimmer gains when they push off the wall or dive into the water.

“When you push off the wall or you dive in, you're going faster than you can possibly swim,” Madge says. “If you can ... maintain that speed, you'll do the length of the pool in as little as 15 or 16 seconds. Now, of course, you can't because water is fairly thick so the whole purpose of the dolphin kick is to maintain your speed for as long as possible. So you're not trying to generate speed you're just trying to maintain it and to do that we have to get into fluid dynamics. Specifically, you don't want to interrupt the laminar flow of water over your body.”

When swimmers break the surface of the water with their kicks or strokes, Madge says, that slows them down.

“It's really surface tension,” Madge says. “There's a lot of surface tension in the water and if you have to continually break that surface tension then you're going to be spending a lot of effort on that ... kicking air doesn't send you very far. You want to kick water to the point where you actually want to be at least half a meter under water, preferably more, so that your dolphin kicks don't cause the water to swirl on the top. ... The deeper you can get, the more propulsion that you are getting out of the kick.”

Engineering the world’s fastest swim stroke is one thing, but it’s an entirely different matter to get the Olympic Committee to let you compete with that stroke. Currently, swimmers are not allowed to swim underwater for more than 15 meters.

“According to the rules set up in in in the late 80s for backstroke and in the late 90s for for all the other strokes, you're not allowed to go more than 15 meters under water,” Madge says. “The strokes are pretty much locked in. ... You're not allowed repeating dolphin kicks in breaststroke underwater, so that's that's pretty much limited by the nature of the stroke.”