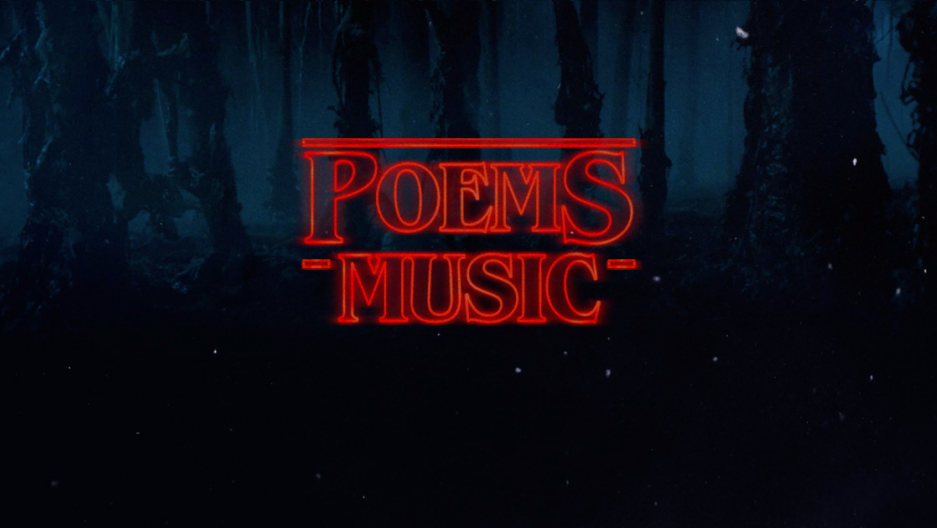 What prompts the "Stranger Things" that pop into our brain? Writer Tamar Charney finds words of old poem or lyrics to longtime favorite songs flooding into her cranium at the most random of times. (Note to readers: Don't forget to catch the footnotes at the end of this story.)

I’d just finished a conference presentation and sat down at the table at the front of the room as the next person on the panel began. People were still looking at me and adrenalin was still racing around my veins. To distract myself I picked up the hotel pen and started doodling on the little pad of paper in front of me.

Circles, boxes, random shading and then the beginnings of a carnation. The words “clear water in a brilliant bowl, pink and white carnations” slowly resolved in my mind before I abruptly turned the carnation into a rose and the beginnings of the bowl into a square.

I knew I couldn’t go there. Not then. Not in front of a room of people. Even if I couldn’t quite place what the words were or why on earth they popped into my head.

Later on the plane home, the words appeared again. This time I knew them. They make up the opening line of a poem by Wallace Stevens called “Poems of Our Climate” that I loved beyond belief as a teenager and revisited from time to time as an adult. It’s a poem about beauty, simplicity and utter dissatisfaction with what should be enough. It's a poem that haunts and stalks me when I know I should be good with what I've got or done — but for whatever reason I'm totally not.

For a while it was "my poem," just like that beloved song that you come back to time and time again. You know, the song that each time you hear it you sing along. The song that unveils a new layer of connection to your life.

I’m used to music and songs coming to me without an invitation, even when it takes time to match a name with its face. There’s the melody I wake up humming, the dope beat that infects the rhythm of my walk, and the song someone’s innocent inadvertent juxtaposition of words sets my mind a singing. The jukebox in my brain is regularly starting up some dusty old single I’ve forgotten, but am delighted to hear.

Related: Music earworms that stick in our heads

For a long time I just thought art was something you sought out at Lincoln Center, a visit to The Louvre, or a film you went to see at the cinema. One must seek out highfalutin experiences of high culture, right? But these days it comes to me, more and more, instead of me coming to it. Scenes from movies, little snippets of music and lines of poetry surface because they have something to say sometimes about things I’m not even fully aware of yet.

Maybe this is just what happens to you after decades of consuming pop culture and high art. It’s as if you get this cool magical ability to conjure the world through an artist's or writer’s eyes. Is this what people mean when they talk about wisdom?

I just never thought wisdom might be a crazy stew of our own thoughts and experiences simmered with ideas from people who have previously chewed and tried to digest the same ingredients of life. Wisdom just seemed like it would be more refined than this stew-like thing in my brain that barfs up other people’s songs, poems and images at the most unexpected times.

Like why would poetry come to mind in a generic hotel conference room? I guess I needed that old friend of a poem to remind me that no matter how good of a job I’d just done, I’d still feel crappy about it. And more importantly, that I’m not alone in that.

So, yeah, it does take museums full of art, books full of poems, playlists full of songs (footnote 1 below) and queues full of films (footnote 2 below) to guide us through our lives and remind us that there is nothing we go through that someone hasn’t gone through before — things that are ironically so universal that it is amazing that someone else could feel the same.

I’m sure there’s some art about that, too.

So, about those footnotes ...

(1) Last 10 songs I heard from a playlist I call “Bless Bless,” which is a goodbye in Iceland. I listen to this playlist a lot on airplanes.

(2)  If there were a Netflix queue of the 10 embarrassing films I’ve watched so many times they’ve infected my brain ...

* My editor asked for these footnotes, something that would have never occurred to me to do. Thinking this guy must have spent way too much time reading David Foster Wallace, right?