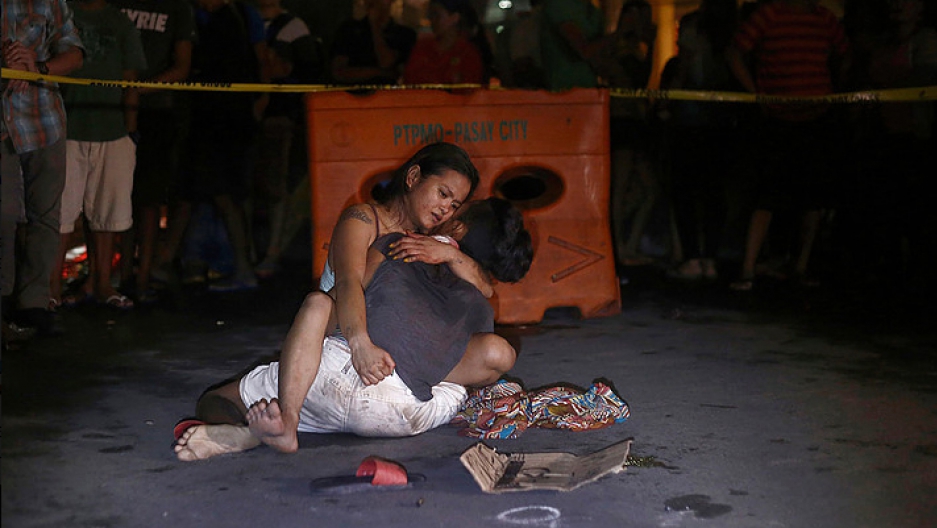 It’s just past 10 pm on a Friday night in the Philippine capital of Manila. A crowd is gathered around police tape on a quiet street.

At the center is a man named Redentor Manalang, who is slumped over the back of his sidecar motorcycle, a gunshot wound to his head. The unknown assailants sped away on their own motorcycle before the police got there. They left a blood-splattered cardboard sign next to his body. It reads: “I’m a drug pusher. Don’t copy me.”

(Editor's note: Some photos in this story are not suitable for all audiences.)

Manalang’s murder follows the playbook of the new Philippines president’s war on drugs.

Rodrigo Duterte rode to power on the promise that he would rid the country of drugs and crime. The methods he proposed were highly controversial, and often involved fatal means. Duterte has boasted about killing people himself, and said that he would “fatten the fish in Manila bay” with the bodies of 100,000 dead criminals.

Many wrote this off as mere campaign rhetoric. But Duterte was inaugurated on June 30 and in just over a month, at least 600 people have been killed in the name of his violent war on drugs.

On June 5, 2016, a month after he was elected, Duterte stood in front of national television, outlining his plan for cracking down on drug addicts.

“Feel free to call us, the police, or do it yourself if you have a gun,” he said. “You have my support.”

Fatal force, Duterte told the crowd, was a reasonable response to drug addicts. “If he fights and he fights to death, you can kill him.”

“Barilin mo [shoot him] and I’ll give you a medal,” he told a cheering crowd. “Shoot a lot and I will make you police chief,” he joked.

The statement garnered international attention and condemnation from human rights groups. Critics took this as an incitement to violence. Apparently vigilantes did as well.

For the vigilante who singled out Manalang, there’s one fewer alleged drug dealer on the street. The police mark the bullet casings scattered around him, photograph the crime scene, empty his pockets for evidence, set aside the blood-splattered cardboard sign, wrap his body in a blue tarp, and load him into a waiting ambulance.

Someone lights a candle next to the thick puddle of Manalang’s blood on the asphalt, and one of his friends, starts up his motorcycle sidecar, still splattered with blood and drives it away.

The Philippine Daily Inquirer, a leading local newspaper is compiling a “Kill List” of drug-related deaths since Duterte took office. Using reports from their correspondents across the Philippines, The Inquirer has so far counted more than 600 killings since Duterte became president — either by police in drug bust operations or by vigilantes —­ that they’ve been able to attribute the drug war.

The number already represents a significant spike in violent deaths in the Philippines. However, Sara Pacia, one of the reporters behind the Kill List, says “the real number is much, much higher.”

According to The Inquirer’s numbers, which are updated twice a week with fresh reports, there’s now an average of 14 drug-related deaths a day in the Philippines and on particularly bloody nights, it can add up to more than 20. Less conservative estimates by other sources put the number of drug-related deaths as high as a thousand. 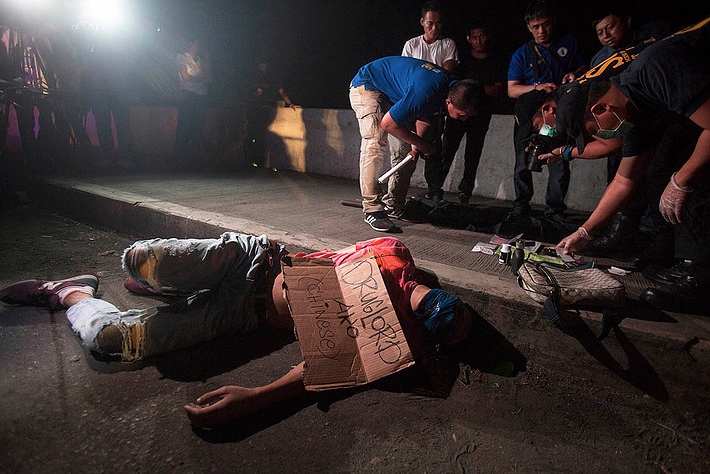 A victim of summary execution, with packing tape wrapped around his head and a sign on his chest that reads, “I am a Chinese drug lord,” found along Road 10 in Manila.

The Philippine police don’t keep a count of deaths related specifically to drugs, though there were 2,835 homicides of all motives in 2015 — about 230 per month. The drug killings alone are triple the previous year’s monthly average.

We were still at one crime scene not far from where Manalang was shot, when reports of who more killings come in.

We drive to the one on a major intersection of EDSA, Manila’s main avenue. It’s past midnight, but the streets are still full of people. A large crowd was gathered around a woman, sitting on the pavement, who wept as she clutched the limp, bloody body of her husband, Michael Siaron, in her arms.

Siaron died the same way as Manalang. A gunshot wound to the head by vigilantes on motorcycles. A handwritten cardboard sign lies next to him, accusing him of being a drug dealer.

“I don’t know why this happened to him,” Olayres said.

“It’s so cruel of the person who did this,” her sister, who wept beside her added, “they killed the one who is making a living for us.”

“He uses drugs, but he doesn’t sell them,” Olayres said through tears. “I’ll stand by that, my husband doesn’t sell drugs. I don’t know the reason why they did this to him.” She said Siaron, who rode a pedicab for a living, went out that night to make a bit of money to buy breakfast for the family in the morning.

Human rights advocates say these extrajudicial killings target the poor. Often, the victims are unarmed, low-level drug users, whose individual deaths have little impact on the systemic drug problem in the Philippines. Their killers becomes the judge, jury and executioner. 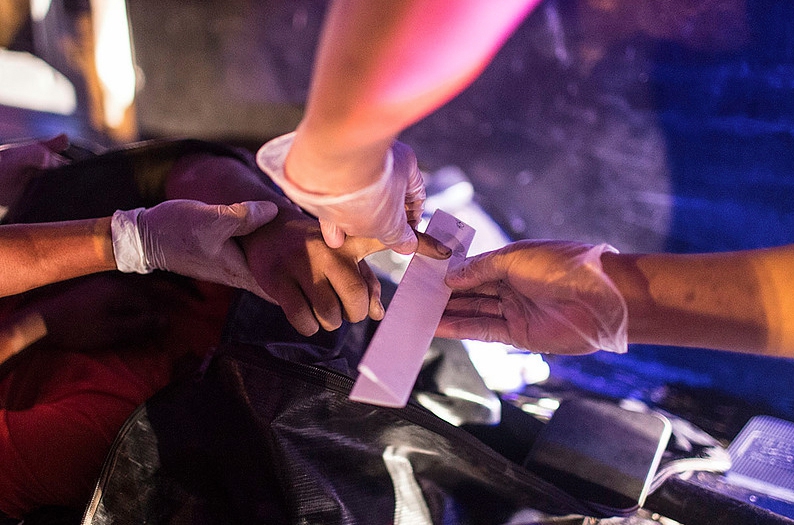 Scene of the Crime Operative fingerprinting an alleged drug suspect killed in a shootout with police on a 10-print card for identification.

Police spokesman Dionardo Carlos says they will pursue the vigilante killings as murders. But there’s an attitude that these deaths are collateral damage in a larger goal.

Carlos admits there has been an increase in murders since Duterte took office, “but at the end of the day are we looking at these as increases that are beyond control, or are these the consequences of freeing the society from drugs?”

Carlos adds that there’s more to the drug war than the spike in killings. He cites the thousands who have been arrested and are now awaiting trial in crowded jails, the tens of thousands who have surrendered to the local governments who are now being monitored. Overall crime rates have dropped in the Philippines’ major cities — even as murder rates skyrocketed.

Jennelyn Olayres, however, doesn’t want to talk about the larger drug war. “I want justice for my husband. What they did to him was not justice.”

She’s not likely to get it.

A survey by the University of the Americas in Mexico, found that the Philippines has the worst impunity record in the world. Nowhere is it easier to get away with murder.

Duterte was mayor of the city of Davao for 20 years. It’s where he first became famous for promoting extrajudicial murders as a way to address crime. In Davao, no one has ever been prosecuted for a vigilante killing.

Now other mayors are emulating Duterte and announcing bounties for anyone who kills a drug dealer. Vigilantes continue to kill people with little fear of getting caught. And the body count in the Philippines is climbing.

The same night, Alejandro Ormanita, loads the body of a third victim into his truck. He’s an embalmer.

“There are so many,” Ormanita says. “We’re already tired of embalming the dead. But that’s what Duterte said, that the owners of funeral homes are going to get rich.”

“We’re putting up with the hardship,” Ormanita says, “because we’re doing it for the president.” A recent survey by Pulse Asia found that Duterte has an unprecedented 91 percent approval rating in the Philippines.