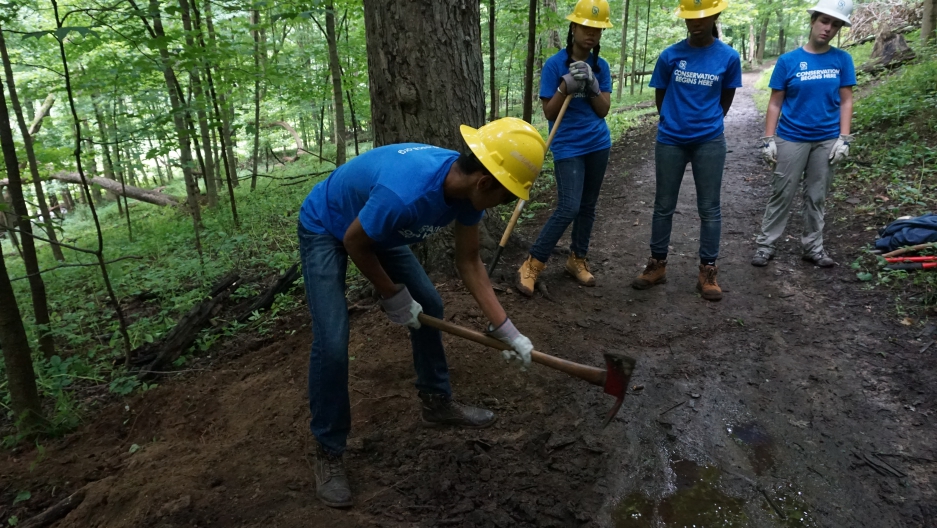 Sixteen-year-old Vishal Kharel digs a pit in South Park, just outside of Pittsburgh as his crew looks on. He's part of a program that gets teenagers from low-income households summer jobs and, increasingly, teens who arrived as refugees are joining in order to help their families.

Sixteen-year-old Vishal Kharel is spending the summer restoring trails in a large county park in Pittsburgh’s southern suburbs. As he digs a ditch, he describes his actions to the other teenagers on the crew.

He's is part of the program called Learn and Earn in Pittsburgh. It's designed for low-income youth and backed by public and private funds. The kids learn soft skills, like how to shake someone’s hand in a job interview and hard skills they can parlay into careers, like the physical work of conversation.

Vishal is kind of a leader in the group of about ten workers. This kind of physical work comes easily to him partly because he spent a lot of time playing in the dirt back home in Nepal, where he lived the first half of his life in refugee camps.

“We had a game where we dug a little hole and would try to throw stuff in and see if we could make it from ten yards away,” he says.

When he was 8 years old, his family was resettled in the US. They started out in Seattle, where they were resettled by the US government. A couple of years later, they came to Pittsburgh to be close to family and because of the lower cost of living. His family is doing ok financially, but the $7.25 an hour Vishal is making with Learn and Earn means he can go to soccer camp — and pay for it himself.

It's not a new phenomenon for young people to work summer jobs to make money and gain skills. For children who came to the US as refugees, there’s a bit more at stake than pocket money though. When refugee families first arrive, the US Office of Refugee Resettlement offers about three months of basic assistance with things like rent, food and a small amount of spending money. But then, they’re on the own in the system, often cash-strapped and in an unfamiliar land. Local organizations and non-profits may provide some assistance, but for the most part, it's up to families like the Kharels to find their way. This summer employment program in Pittsburgh is helping the youngest of these refugees — and others who are struggling to make ends meet — make some income, with the hope that they’ll also fill jobs that sit empty.

Also: If you want to understand the rise of anti-refugee sentiment in the United States, studying the rise of Ann Corcoran isn't a bad place to start.

Pennsylvania has received 2,645 refugees since October, 2015 through last July, mostly from Syria, the Democractic Republic of Congo, Bhutan and Somalia. Kharel lives in Prospect Park, a suburban neighborhood of apartment complexes that’s home to many refugees. Many teenagers here are taking part in Learn and Earn. While Kharel restores trails, others are working in offices, retail or hospitals. The program employed almost 2,000 young people this summer.

“Some of the kids were saying that they really needed a summer job because no one in the house was working,” says Susie Backscheider. “Even though it's only a six-week program, they thought that would help out the family since there is no income coming in.”

Backscheider runs the youth mentoring program at the support center here and helped dozens of teenagers fill out their job applications. Anita Bastola, 15, was one of them. She really wanted to work because in her house, her older brother is the only breadwinner.

“My parents don’t really work and they don’t speak English too. So I just want to, like, fill their needs. And things that they don’t get, I want them to have it,” she says.

Anita and some of the others will end up handing over the paycheck to their families. But, where they can, they’ll have some fun with it too: shopping for shoes, going out to eat and buying presents for their parents.

One of the girls told me that she took her mom shopping for clothes with her first paycheck. These teenagers seem to be thinking about their mothers all the time.

On a Sunday morning, I drop by Vishal’s house to meet his mother, Kaushila. She’s preparing lunch before her janitorial shift at Macy’s. 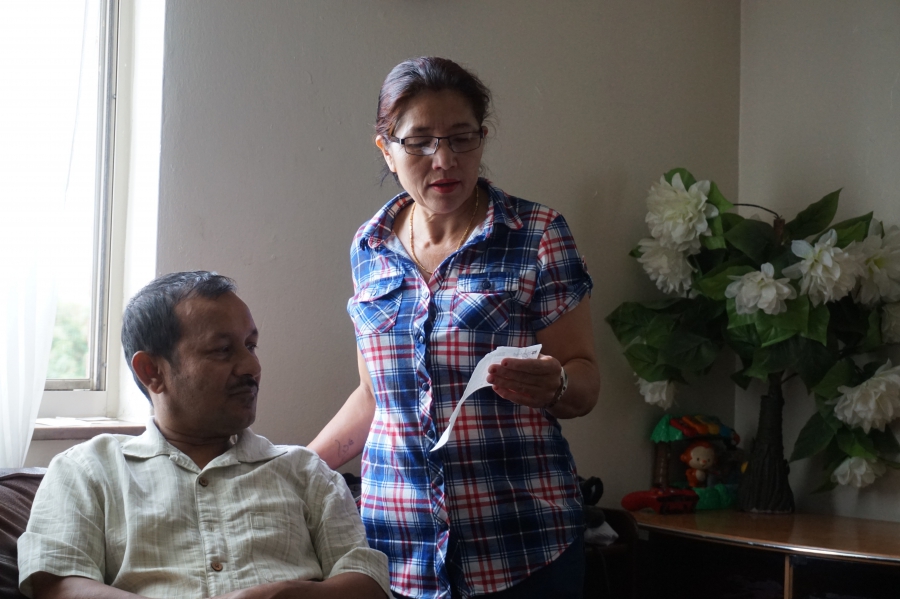 Kaushila and Prati Man Kharel receive a $381 check from their son. The family arrived as refugees from Nepal about eight years ago and pool resources to make ends meet.

“She makes $8,” he says. “I don’t feel really good asking her for money — and she doesn’t feel good either.”

Kaushila rubs some fingers together — the gesture for expensive — and hugs her son. Vishal’s 26-year-old brother Anup comes by. He lives around the corner and works at a nursing home. He’s dropping off a $381 check for his parents. The Kharels are getting by by pooling money and resources. They share everything from meals to vehicles.

“Compared to the past time, we came to the United States and now, because now we are stable, we can do anything, whatever we want. At that time, we have a little bit problem. Everybody does, know what I mean?” says Anup. He says it’s a good thing his brother is working and he has high hopes for Vishal, who has been attending American schools since elementary age. "He can go forward and go to school or college, know what I mean? University. I don’t want him working like me. Like entry-level or something."

For now though, Vishal is having a fun summer, gaining useful skills and making some money.

More: His message to new refugees in Montana: 'You have to have thick skin'