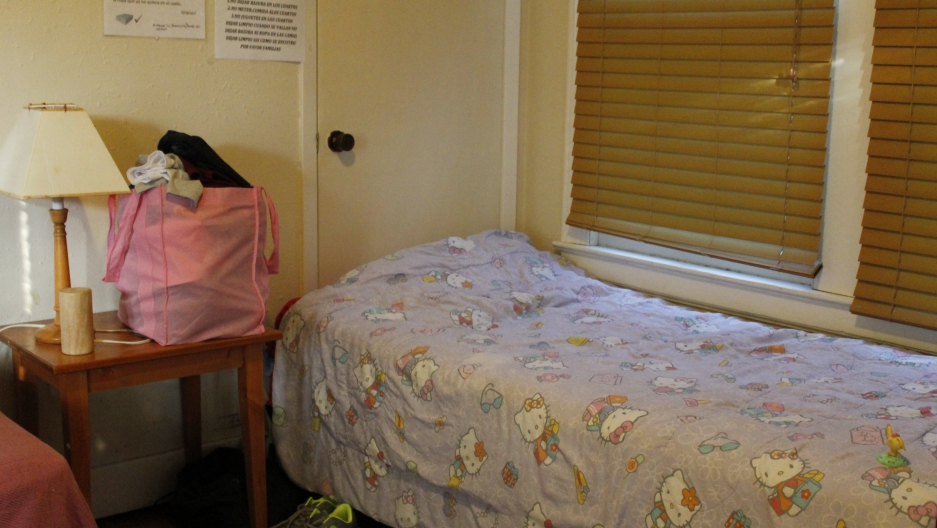 The bed of a migrant woman who, after being released from detention, is spending the night at Casa de Raices in San Antonio, Texas before reuniting with family in the US and waiting for her immigration court date. ICE is considering a proposal to add a third family detention center in Texas.

There are already two privately operated detention centers in Texas to house women and children who cross the border. Advocates for these families say those facilities cause problems enough.

Dr. Olivia Lopez is a former social worker from the Karnes Family Residential facility, run by GEO Group. She says women and children there were coerced into medical procedures — they cannot reject a blood draw or vaccinations, for example. She says the environment at Karnes created high levels of anxiety.

“They were being lorded over at all times with the threat of removal of children or deportation, all the time,” says Lopez.

Some women are given alternatives to detention and released from the centers while they await court dates. When women and children are released from the Texas facilities, some end up at Casa de Raices in San Antonio. It’s a two-story home for families where they can get food, water, a night’s rest and legal advice before they reunite with their families across the US and wait for immigration court dates.

Yohannes Bhata is the director of Casa de Raices. He began helping these families around 2013 when the US experienced a surge of Central American migrants. About 47,000 children under the age of 18 were taken into custody between October 2013 and May 2014. When these children are released with their mothers, Bhata gets to work.

“The government, or ICE [Immigration and Customs Enforcement], was dropping them at the bus station with no bus tickets, diapers, food, water or anything,” says Bhata. “For a family who has never been here, with language barriers, it was so sad.”

County official Ricardo O. Carrillo submitted a proposal for a new facility in mid July, in response to a request for information from ICE, seeking locations for another detention facility. Carrillo says the family residential center would bring economic opportunities to Duval County, where part of San Diego sits. And they’re looking for a boon: The county will lose $998,000 in revenue this year because of the drop in oil prices, he says.

“I have people coming in everyday saying, ‘Please help me,’” says Carrillo. “I’ll do anything so that I can earn money and put food on the table.”

The Karnes County Residential Center, where Lopez used to work, saw almost 4,000 detainees come through its doors in the last fiscal year, according to data collected by the Transactional Records Access Clearinghouse at Syracuse University. The South Texas Family Residential Center in Dilley processed close to 7,000 detainees last year. ICE says there are currently 556 detainees at the Karnes facility and 1,437 in the Dilley facility.

A Washington Post investigation found that the Obama administration made a $1 billion, four-year deal with the Corrections Corporation of America to run the facility.

More: At least 72 percent of hundreds of thousands of immigrant detainees come in contact with private prison operators. 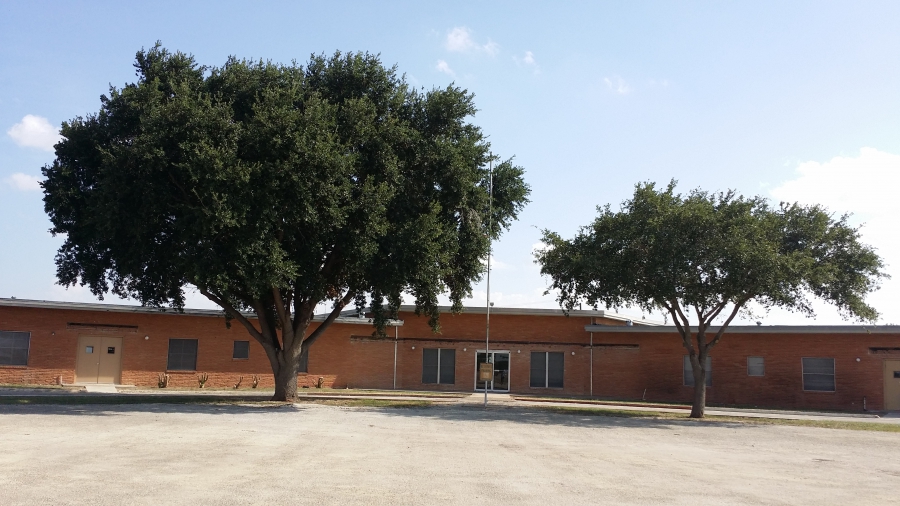 The proposed site of a new ICE detention center in San Diego, Texas was once a nursing home.

ICE has said in statements that it would continue to contract with private companies to operate detention facilities, that it was committed to safety and has many layers of oversight. A spokesperson did not reply to specific questions about allegations relating to medical care and psychological trauma at the centers by the time of publishing.

Local activists are concerned about the new facility because it would also be operated by a private prison company. The proposal involves converting a former nursing home into a private prison, operated by the North American division of Serco, a British company that operates private prisons in the UK and offers a host of other security and private contractor services. But Serco has been accused of abusive practices, such as sexual misconduct by staff and poor medical care, at immigration detention facilities in Britain and Australia.

“We’re continuing our campaign to raise awareness about family detention, as it already exists in Karnes and Dilley,” says Justin Tullius, managing attorney with RAICES in Corpus Christi. “And to let them know that that’s what it would look like here.” 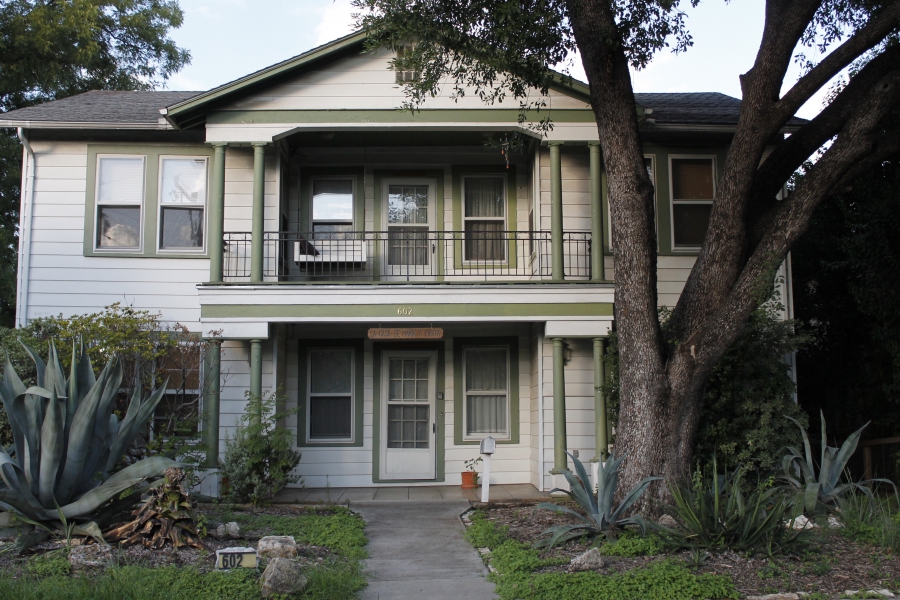 Casa de Raices sits on the corner of a street near downtown San Antonio, Texas. It houses women and children who have just been released from detention facilities.

RAICES is a nonprofit providing services to people in immigration legal limbo. When it heard about the 2014 surge of Central American migrants, the group began gathering volunteers to help. They delivered backpacks with supplies to families at the bus station in San Antonio, assisted with travel arrangements and eventually opened Casa de Raices.

Bhata says ICE now drops off some families at the shelter and officials sometimes call to let them know when they’re about to drop people off at the bus station or airport.

He says when women and children arrive at the home, they’re often traumatized from their experiences in detention.

“They still feel like they’re in jail,” says Bhata. “They would always ask, ‘Is this permitted to have? Can I go outside?’”

One Honduran woman who recently arrived at the home with her 15-year-old son wanted to tell her story, but asked us to not use her name. Her immigration case is still pending. She says she fled her country in search of safety because the Mara Salvatruchas, an international criminal gang, wanted her to pay a huge amount of money she could not afford. They were also after her son.

“They said if he didn’t join the Mara Salvatruchas they were going to send him to me in pieces in a box,” she says in Spanish. When she arrived in Mexico, she received a phone call from her husband, who lives in the US. He said he could no longer support them and he stopped sending them money.

So she found a migrant shelter in Mexico and worked there for a few days until she could afford to continue her travels. She made it to Ciudad Juarez, but did not have the courage to illegally cross into El Paso. Instead, she walked up to border patrol agents at the Puerto Palomas de Villa crossing and asked for asylum. That’s when they were transported to a detention facility.

Once they were released, to await their court dates, and unable to depend on her husband, they had no family to turn to for support. So they ended up in Casa de Raices.

Another woman at Casa de Raices, Ana, is a 26-year-old mother from Mexico who was housed with her toddler daughter at the Dilley facility. She asked that we only use her first name.

She would like to see the detention facilities close because, she says, they’re inhumane. She also says she wants people to understand what she’s been through.

“Sometimes I’d like to imprison the immigration officials, the judge, the president, so that they can endure 19 days in there with their children,” says Ana, also in Spanish. “So they can see how people die, how a child loses their dreams.”

Bhata says there are alternatives to detention facilities.

“The federal government should work with religious organizations, or organizations like RAICES who are interested in helping immigrant people and help them to establish alternative detention housing,” he says. “Instead of working with private corporations, they should invest in other organizations that can do a better job and empower people.”

Also: ‘Madres Berks’ are on a hunger strike to get themselves and their kids out of immigration detention

The mother from Honduras says her 15-year-old son’s attitude and morale has been fading since they came to the US, especially once he learned about the break with his father.

“My sons says to me, ‘Mommy tell immigration to deport us, and if they kill us over there, then they kill us. But I don’t want to suffer anymore.’”

She has no other family in the US, but she’s hopeful about making her case in immigration court.

For now, other women who are crossing the border in the future could end up in Texas’ third family immigration detention center. ICE said in a statement that it was considering proposals and expects to make a decision about opening one or more new facilities in October 2017.