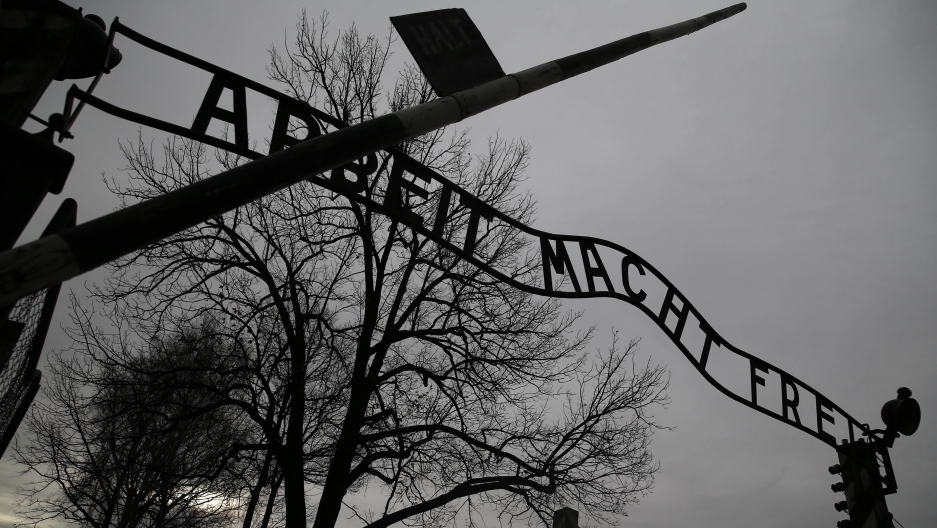 The Nazi slogan "Arbeit macht frei" (Work sets you free) is pictured at the gates of the former Nazi concentration and death camp Auschwitz-Birkenau in Oswiecim, Poland.

It's hard to find words to describe an abomination like Auschwitz, the infamous Holocaust death camp in Nazi-occupied Poland.

However, if you choose the wrong words, you might soon end up in jail.

This week Poland's ruling right-wing Law and Justice Party pushed for a new law that would forbid the use of phrases like "Polish death camp" or "Polish concentration camp," which the party says imply that Poland was responsible for atrocities perpetrated by Nazis during the Holocaust. If the law passes, there could be a penalty of up to three years in prison.

The governing party is right about the distinction, says Glenn Dynner, a professor of Jewish history at Sarah Lawrence College who studies Polish-Jewish relations.

"These are German concentration camps or death camps," Dynner says. "They were created by Germans during the occupation of Poland."

President Barack Obama caused controversy in 2012 when he failed the draw that distinction while awarding a posthumous Presidential Medal of Freedom to a Polish resistance fighter. Obama referred to a “Polish death camp" during his speech in Warsaw, and later apologized, saying he should have used the term "Nazi death camp in German-occupied Poland."

But Dynner says there's something worrying about Poland's attempts to criminalize the phrases.

"The problem is [the proposed law] seems to be a kind of denial of any Polish culpability of the event,” Dynner says, warning that the law seems connected to a broader autocratic turn in Polish governmental policies under the new PiS regime.

"There’s really been a rollback of a lot of democratic progress and freedoms of the press, judicial appointments have been tampered with," Dynner says. "It’s all part of a strategy by the new Polish President Andrzej Duda to create a very different image of Poland. One in which a government can control not only what goes on within Poland but the very perception from the outside."

The Justice Ministry released a statement saying the new law "will effectively combat the lies detrimental to the good image and good name of Poland, reproduced mainly by foreign media," the BBC reported.

“Like any autocratic regime [Duda] wants to make Poland great again,” Dynner says, "and that means really re-envisioning the past as one of unblemished heroism of Polish struggle against external tyranny, and Poles were really perceived as the victims of history including the Holocaust by many on the right.”

Poles haven't stayed silent about their government’s new direction. Organizations such as the Polish Academy of Sciences have protested historical revisionism. And earlier this summer hundreds of thousands of people marched in Warsaw against the government's nationalist and anti-democratic moves.

"[The protests] had to do with the removal of constitutional guarantees and increased police surveillance,” Dynner says.

With this sort of public outrage, Dynner thinks it's unlikely that the proposed law will actually become law.

“What you don’t want to do is repress. Repress freedom of speech, repress the ability to protest and try to control speech. That resembles what the Poles were fighting against, an autocratic, dictatorial German regime that was imposed on them,” Dynner says.