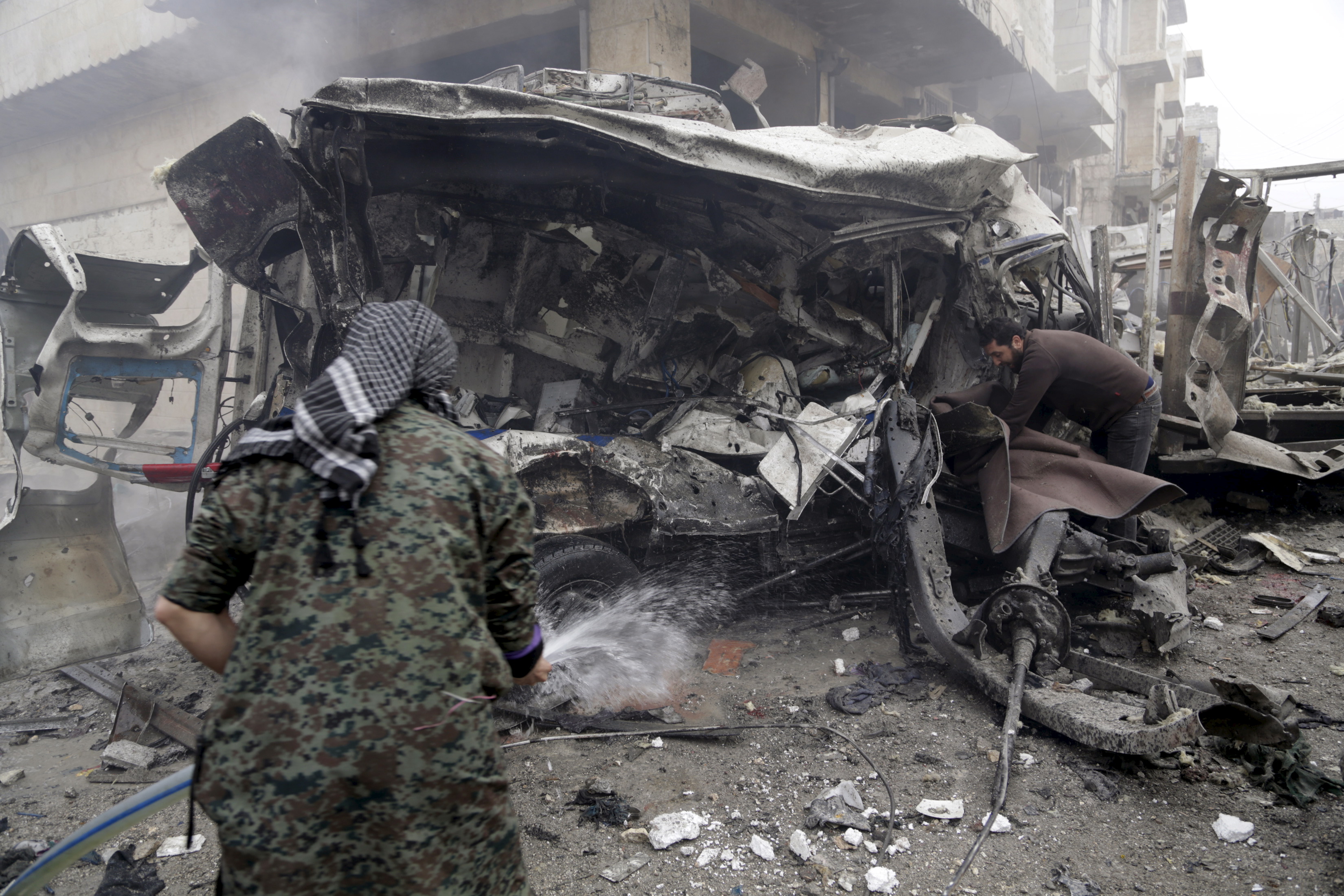 A man sprays water on an ambulance at a site hit by what activists said were three consecutive air strikes carried out by the Russian air force, the last which hit this vehicle, in the rebel-controlled area of Maaret al-Numan town in Idlib province, Syria January 12, 2016.

Russia on Tuesday announced for the first time it had flown bombing raids against jihadist groups in Syria from an airbase in Iran after deploying its warplanes to the country.

The raids mark a shift in Moscow's military strategy in war-torn Syria, where its bombing campaign in support of long-time ally Bashar al-Assad had until now been flown out from bases in Russia and the Russian airbase in Syria.

"On August 16, Tu-22M3 long-range bombers and Su-34 frontline bombers, flying with a full bomb load from the Hamedan air base (Islamic Republic of Iran), conducted a group air strike against targets of the Islamic State and Jabhat al-Nusra terrorist groups in the provinces of Aleppo, Deir Ezzor and Idlib," the defense ministry said.

The strikes led to the destruction of "five large warehouses with weapons, ammunition and fuel" and jihadist training camps near Aleppo, Deir Ezzor, the village of Saraqeb in the Idlib region and Al-Bab, an ISIS-held town in Aleppo province, the ministry said in a statement.

The bombing also targeted three command centres near the village of Jafra and Deir Ezzor, killing "a large number of fighters," Moscow added.

Conducting its bombing raids from Iran will dramatically cut the time it takes Moscow's long-range bombers to reach Syria.

Moscow has used warplanes stationed at its Hmeimim airbase outside the Syrian coastal city of Latakia, as well as warships stationed in the Caspian Sea and a submarine in the Mediterranean Sea to launch cruise missile attacks on Syrian territory.

But Hmeimim has only short-range planes and fighter jets, meaning long-range bombers had to be deployed from southern Russia. 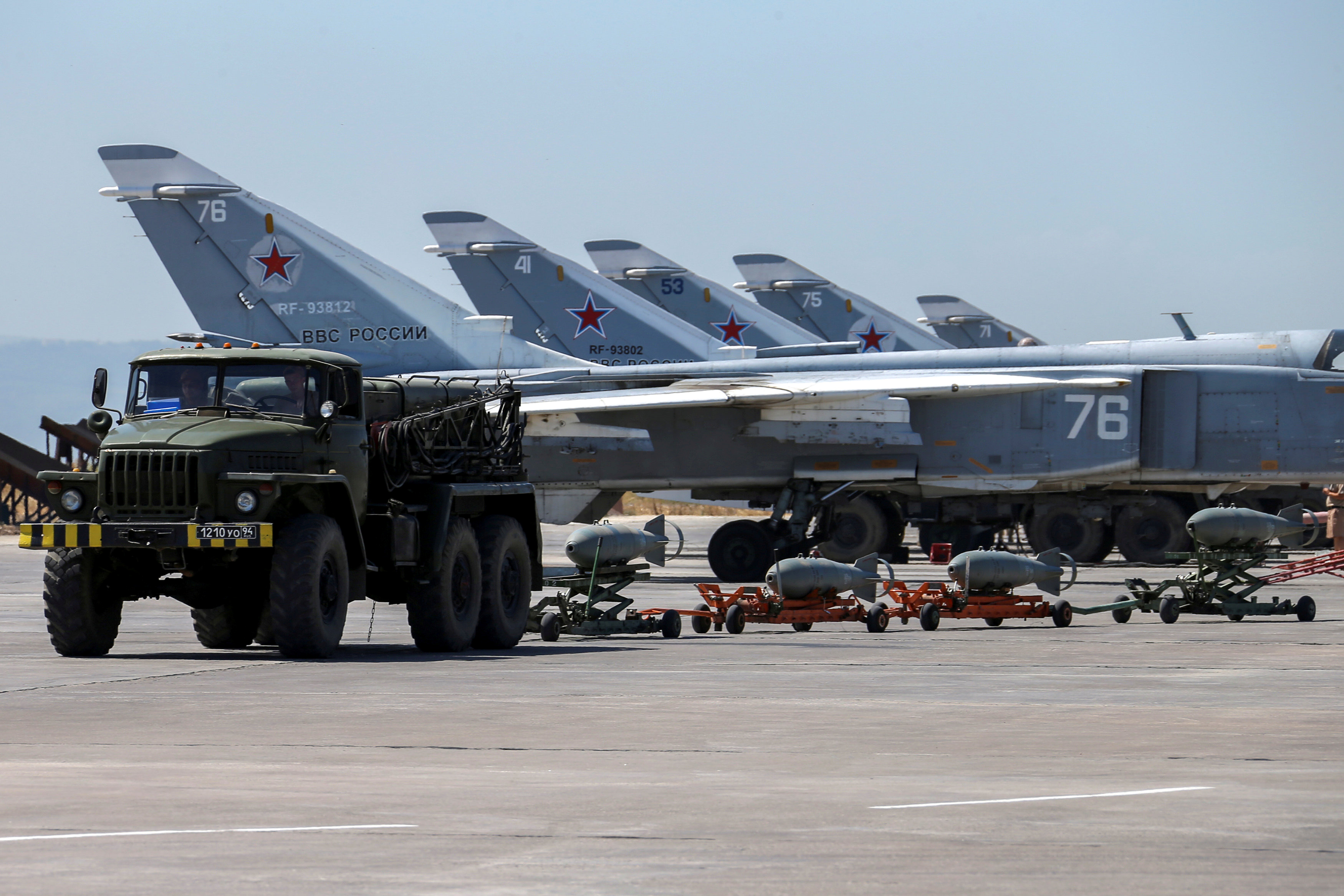 An unnamed military source told Interfax news agency that the Russian army had sent requests to Iran and Iraq to fire cruise missiles across their airspace.

Iran and Russia are the two firmest backers of the Assad regime and have opposed international calls for the Syrian leader to step down in a bid to resolve the civil war that has killed more than 290,000 people since it erupted in March 2011.

Russia's Defense Minister Sergei Shoigu has held several meetings over the past year with Iranian counterpart General Hossein Dehghan, most recently in June in Tehran, where they pledged to deliver a "decisive" battle against "all terrorist groups."

Russian deputy foreign minister Mikhail Bogdanov was in Tehran on Monday, where he discussed the "high mutual interest" of deeper cooperation betweenRussia and Iran in the Middle East, the Russian foreign ministry said.

Shoigu claimed separately in comments aired Monday that Russia and the United States are also close to joining forces in some form around Syria's ravaged second city of Aleppo, where Russian planes and regime troops are battling rebels for control.

But in Washington, State Department spokeswoman Elizabeth Trudeau refused to confirm any collaboration.

A senior Russian diplomat in Geneva, Alexei Borodavkin, told Interfax on Monday that the Russian and American militaries were in the process of "agreeing some concrete practical issues" regarding humanitarian aid deliveries to the city.

Fighting for Aleppo has intensified after regime troops seized control of the last supply route into rebel-held areas in mid-July.

The latest raids on two rebel-held districts of the city killed 19 civilians on Tuesday, according to the Syrian Observatory for Human Rights.

Observatory head Rami Abdel Rahman said the strikes, which left three children among the dead, were carried out by either Russian or Assad regime aircraft and had also wounded dozens of people.

The increased fighting has raised concerns for the estimated 1.5 million civilians still in Aleppo, including some 250,000 in rebel-held areas.