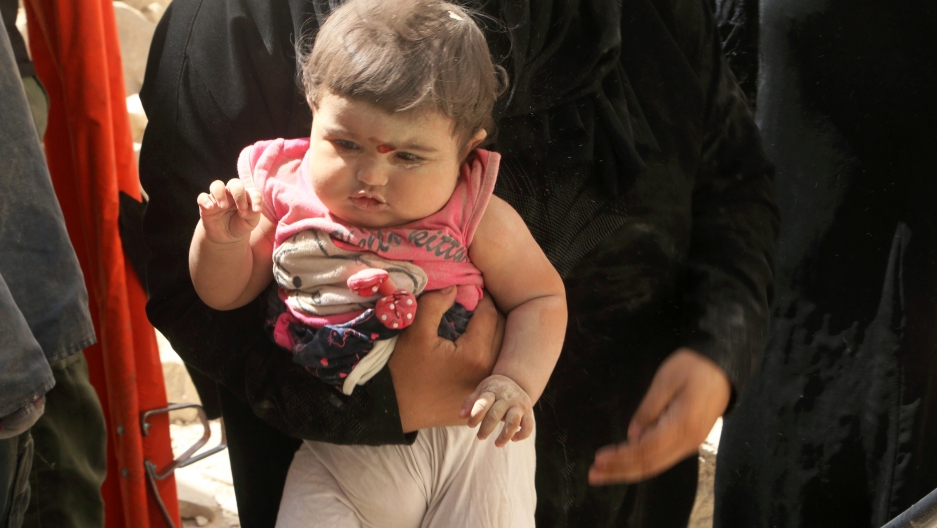 An injured toddler rescued after being trapped under rubble from an air strike on rebel-held eastern Aleppo, Syria, August 15th 2016.

A group of doctors in the besieged Syrian city of Aleppo have appealed to President Barack Obama for help. In an open letter, they told the US president, “We don’t need tears, we need action.”

The doctors are in the eastern part of the ancient city, in an area controlled by rebels.

One of the physicians who signed that letter is an obstetrician-gynecologist called Doctor Farida. She uses only a first name for security reasons.

Explosions rattled in the background as she spoke with us on Tuesday. “It’s an attack. But that’s normal,” Farida chuckled. “It’s away from me. It’s not next to me. Explosions are all the time.”

But her hospital isn't any kind of haven. “It’s not safe. I work on the third floor, and many times the walls have been perforated.”

Once a patient was hit in the neck by broken glass during an airstrike, she recalls. “So every woman who comes to the hospital knows there’s a danger to her life. So they just give birth and go home, as they know our hospital is always being targeted by the Assad regime.”

The regime denies deliberately targeting medical facilities, or indeed any civilian targets. Bashar al-Assad’s Russian allies say the same. Both talk only of unfortunate collateral damage. But Syrian activist groups and international organizations like Amnesty International say the evidence points in the opposite direction. They accuse the regime of a sustained and deliberate effort to deny populations in rebel-held areas access to medical care.

Farida says she’s not safe at home, either. “For one month now, there have been airstrikes on my neighborhood every day. Every morning and every night. The glass in my kitchen is on the ground. I live now without windows.”

Dr. Farida is the only female OB-GYN left in rebel-held Aleppo. She has no intention of quitting. “I love my work, and I love my patients. And I love little babies.”

But she says it’s difficult to bring new life into a world of such violence and death.

One image Farida cannot shed is of a pregnant woman who was brought to the hospital. She’d lost both her legs.

Farida has one child of her own, a 7-year-old girl. “Whenever I hear airplanes close to my house, I tell her to go to the bathroom. I give her an iPad to watch a movie or play a game, so she doesn’t hear anything. But she’s afraid.”

Farida has one consolation. “We have God. And God will help us.”

Clarification: The headline on this story has been changed from an earlier version to specify the part of Aleppo where Dr. Farida works.