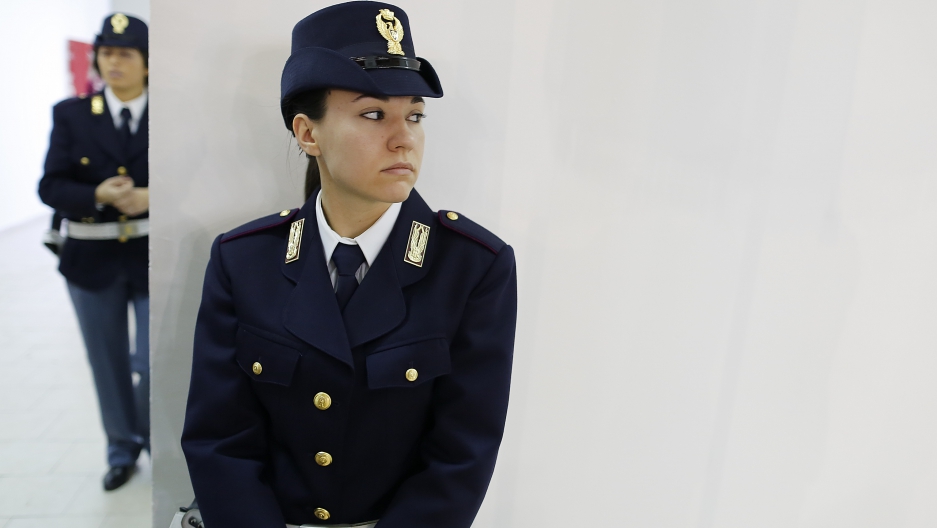 Italian policewomen stand guard before the match between Sporting Locri and Lazio in futsal in Locri, Italy on January 10.

Last week’s Justice Department investigation into the Baltimore Police Department shocked the nation — and not just for its accusations of racism and aggressive police tactics.

At the back of the report was a detailed accounting of rampant sexism in the department — exposing how officers routinely ignored reports of rape and sexual assault against women, calling them “whores” and testing rape kits less than 15 percent of the time.

But now, in response, a handful of women’s rights advocates are trying to call attention to a simple solution that has gotten little traction: hire more female officers. Research shows that rates of violence against women, sexual assault, rape and homicide all decline when women officers are on the force.

However while the solution is ignored domestically, Across Women’s Lives has uncovered that the US government is in fact spending tens of millions annually on increasing women in the ranks of security services.

Outside of the US, that is.

Next year, for example, the US government will spend $133 million to increase the presence of women in peace and security forces in places like Afghanistan, Pakistan and Nigeria.

International security experts say research shows increasing the ranks of women officers in police departments is a recognized solution for reducing violence against women, in addition to stabilizing societies, building trust between civil society and law enforcement, reducing corruption and preventing radicalization — all foreign policy objectives of the US in unstable regions.

And yet policy experts and advocates are at a loss as to why this idea falls on deaf ears domestically. Since the early 1990s, women have made up only about 13 percent of police officers in the US. That number shot up from 1.4 percent in the early 1970s, but it’s never gotten higher than its current rate.

In 2014, researchers studied the impact of the integration of women in US policing between the late 1970s and the early 1990s on violence crime reporting and domestic violence escalation. It showed more women police officers reduce violence against women — especially rape, sexual assault and homicide. It helps men, too: Fewer husbands are killed by their wives. The report was done by Dr. Amalia Miller, of the University of Virginia and Dr. Carmit Segal, an assistant professor for behavioral and labor economics in the economics department at the University of Zurich.

In fact, between 1994 and 2004, domestic violence rates in the US dropped 63 percent — and researchers attribute that decrease in large part to the integration of women into US police forces.

However, even when the US renewed the Violence Against Women Act in 2014 — no one brought up the importance of increasing women officers, despite research that suggested it was the primary reason for the decrease in violence against women.

“There’s a lot of things they ask police and states to do, but increasing female police officers was never a policy mentioned in the renewal of the act,” Segal said. “And it’s not a policy ever mentioned by female advocates.”

Additional studies have shown that women police officers almost never use excessive force, they receive much fewer complaints and they are much less likely to provoke multimillion dollar lawsuits.

International women’s organizations have long recognized the connection between increased women police officers with a range of other improvements such as: less violence against women, stopping rape, preventing terrorism. Policewomen improve the overall operational effectiveness of law enforcement. They are also considered to be more effective at stopping terrorism by detecting radicalization before it starts.

The UN estimates worldwide about 9 percent of police officers are women. However this is much less in some countries — and those with lower female participation in security and government also tend to be less stable and more violent. In Afghanistan and Pakistan, police officers are fewer than 2 percent women. Same with UN peacekeepers — they are 98 percent men.

Starting in 2000, the UN implemented Resolution 1325, which first recognized the need to include women in peace and security. It wasn’t until 2011, however, with the implementation of national action plans, that funding was designated for women police. Research shows that women are better at building trust with local communities, de-escalating violence and collecting vital intelligence. In many communities where women are forbidden from interacting with men, they’re also the only ones who can respond to female victims.

Still, researchers are puzzled at how little attention is given to this.

Perhaps the National Center for Women and Policing might have called for increased recruiting, training and hiring of women police — but the center closed three years ago because of a lack of funding.

“Although tremendous more investment is needed, there’s been increased attention in foreign policy circles around the importance of getting women in police forces over the last decade. And much of the same reasoning applies domestically,” says Allison Peters, senior policy adviser for Inclusive Security, a Washington, DC, organization that advocates for the inclusion of women in peace and security worldwide. “And certainly much more discussion is needed in the mainstream policy circles about this issue in reforming police departments in the US.”

Next month, Across Women’s Lives will take a deeper look at US efforts to increase women in security forces around the world. Stay tuned for more of our stories on this critically important issue.