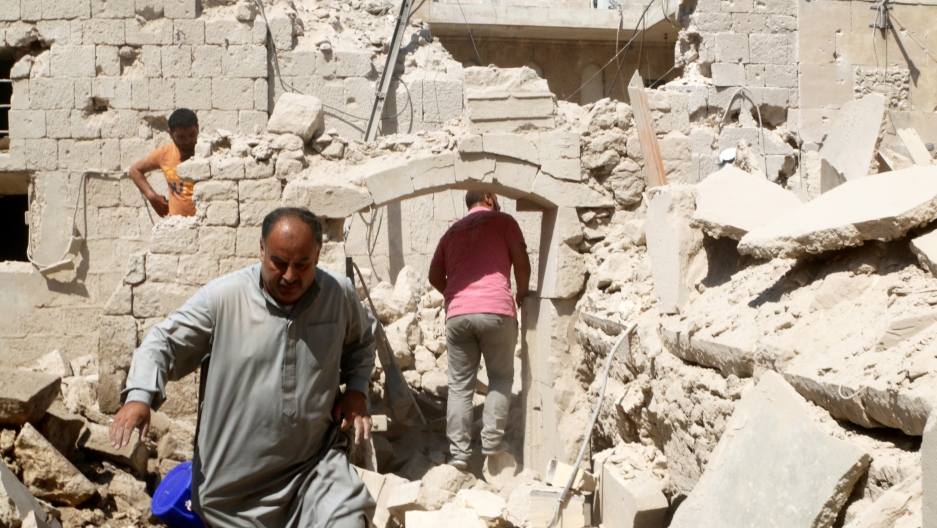 Residents inspect their damaged homes after an airstrike on the rebel-held Old Aleppo, Syria on Aug. 15.
Credit:

Russia is close to joining forces with the United States around Syria's ravaged second city of Aleppo, according to Russia's defense minister.

"Step by step we are getting closer to the situation in which — and I'm only speaking about Aleppo here — we will be able to begin battling together so that there is peace on this territory," Defense Minister Sergei Shoigu told Rossiya 24 television.

In the interview conducted on Saturday but shown only Monday, Shoigu said Moscow is in close negotiations regarding the city, where Russian planes and Syrian regime forces are battling rebels for control.

But in Washington, State Department spokeswoman Elizabeth Trudeau refused to confirm any collaboration.

"We have nothing to announce at this time," Trudeau told AFP.

"We speak regularly with Russian officials about ways to strengthen the cessation of hostilities, improve humanitarian access and bring about the conditions necessary to find a political solution to this conflict," she added.

Shoigu acknowledged that Moscow and Washington are still deeply at odds over the situation in Aleppo, accusing rebels of holding civilians hostage and waging brutal suicide bombings.

"In the eastern part of Aleppo, people are hostages," he said, accusing the rebels of planting bombs along escape routes established by Russia and of staging executions.

He blasted accusations that Moscow has imposed a blockade on rebel-held areas, calling them "untrue" and "propaganda."

He said suicide attacks by rebels have included loading an armored vehicle with explosives and welding it shut.

"That's moderate opposition? Who is this?" he said.

Read more: This man was the public face of emergency volunteers in Syria. An Aleppo airstrike killed him.