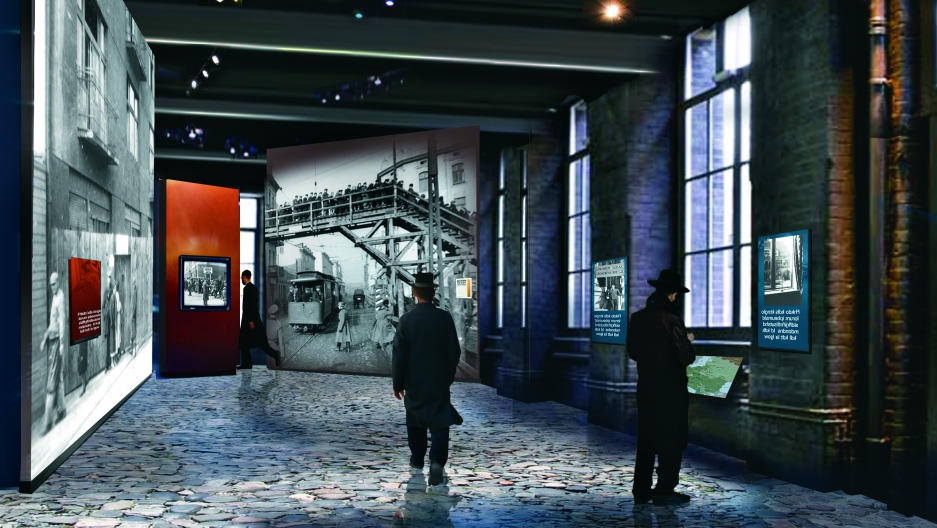 A rendering for a new Holocaust museum, in Brooklyn.

One generation from now, it may be impossible to hear firsthand stories of the Holocaust.

Seventy-one years after the end of World War II, there's a growing urgency to preserve the stories of survivors. A new museum in Brooklyn is trying to do just that.

But the Amud Aish Memorial Museum is a bit different than other Holocaust museums, according to Rabbi Dovid Reidel, the museum's director of research. He says Amud Aish focuses less on stories of death, and more on stories of Jewish religious life.

“Many of the other museums have been focusing on the perpetrators,” says Reidel. “What the Nazis did. The murderers, the methods of murder.”

“To us, of greater importance is not focusing on the evil — though it's important to remember and not to forget — but it's to focus on the victims and their perspectives.”

For now, the Amud Aish Memorial Museum fills a temporary space in Mill Basin. But in 2017, a permanent museum will open in Brooklyn's Borough Park section.

The museum's location is both practical and symbolic. Tens of thousands of survivors moved to New York at the end of World War II. In Borough Park, which is home to a large community of Orthodox Jews, a museum about the Holocaust is almost like a museum of local history.

Many of the collection's letters and artifacts came from basements and attics in Brooklyn, says Shoshana Greenwald, who works as the museum's collections manager. In a back room, she keeps a box of white gloves and Magic Rub erasers. “We'll very lightly dab at the document and see what can be removed that way,” she says.

Amud Aish offers tours in three languages: English, Yiddish and Hebrew. Many displays have spiritual as well as historical value, like bits of scripture smuggled into ghettoes or an improvised prayer shawl.

Another unusual artifact is a Yiddish-language diary kept by Dr. Hillel Seidman, who was one of hundreds of thousands of Jews forced into the Warsaw Ghetto.

“All of us had surrendered by total despondency,” read one of Seidman's entries displayed by the museum. “Suddenly, my elderly white-bearded neighbor, with his talise and tefillin, straightened up and began to speak.”

“He said, Jews, do not be depressed. We are marching towards the Messiah. Toward our redemption.”

Seidman's writings — like many of the objects in the Amud Aish Memorial Museum — reaffirm the religious commitments of Holocaust survivors. But the passage isn't without controversy. Lots of atheists died in the Holocaust, and many survivors no longer believed in God after such an atrocity. Some Jews may take offense at the idea that mass murder could have anything to do with redemption.

“The Holocaust is a very different time, phenomenon, to explain from a faith perspective,” says Greenwald. “How was the genocide possible?”

That's one reason why Holocaust education isn't standardized at Jewish religious schools, say Greenwald and Reidel. “There are students who have not learned about it in school at all,” says Greenwald.

“I think part of the problem was the survivors came to America, you wanted to rebuild, you wanted to forget,” adds Reidel. “It wasn't felt there was such a need for an official curriculum.”

The museum's director, Rabbi Sholom Friedmann, hopes the new museum can fill in some of those gaps. In particular, he thinks it will appeal to observant Jews who don't visit other Holocaust sites.

“It's difficult to identify with the narrative if you don't see that your family's story is there as well,” he says. “That's not the Holocaust I heard about. Those aren't the experiences my grandparents talked about.”

Near the end of the temporary exhibit, Rabbi Reidel points out a small pile of objects from Nazi Germany. What's unusual is how the museum portrays them. They're kept low to the ground — a symbolic gesture, says Rabbi Reidel.

“We're not glorifying these Nazi artifacts,” he says. “It's very much in its place. On the ground, where it belongs.”

Instead, the Amud Aish Memorial Museum aims to elevate stories of faith and resilience.