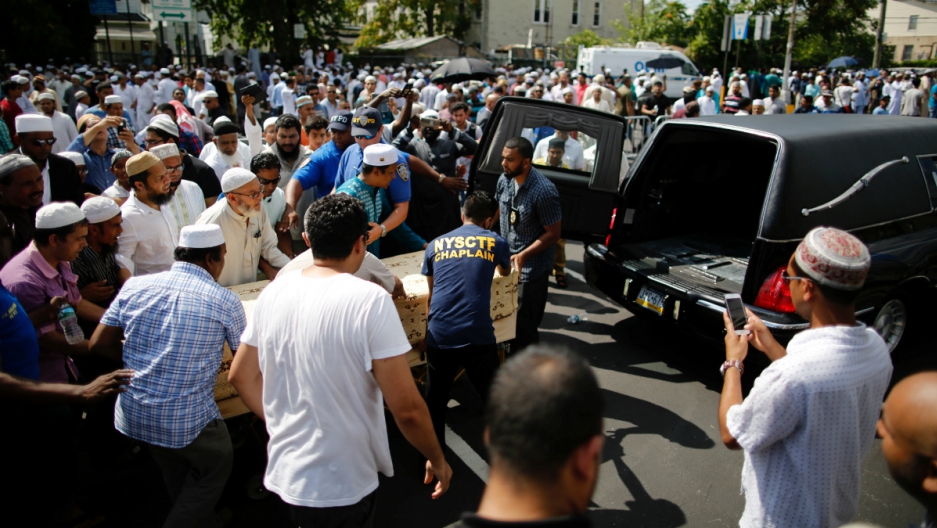 A crowd of community members move the coffin of Imam Akonjee

The head of a New York City mosque and his assistant were gunned down as they were leaving afternoon services Saturday in Ozone Park, Queens.

Rony Rahman, a 23-year-old student at Queens College, grew up in Ozone Park. He regularly attends the mosque.

Rahman says his neighborhood is home to a lot of Bangladeshi Muslims like him.

And the shootings have been a shock.

"Stuff like that usually doesn’t happen in our neighborhood because we are able to coexist with everyone around us. We have a Spanish community. We have a black community. But the majority of us living here is Bangladeshi," says Rahman.

“We never had any sort of crime that was this big in my 18 years of living here. So everyone is just fearful and scared. They are not going outside as much. But then again it’s also bringing the community together in a way so people are just trying to be so strong for each other."

Officials are still investigating the crime and who is behind it, and haven't yet determined a motive. Talal Ansari, a reporter for Buzzfeed, says there is a clear feeling in the community that these men were targeted.

"The Bangladeshi community in Ozone Park believes 100 percent that this must be a hate crime, in some way. And not a robbery and not a random assault.”

Ansari says that people see no other explanation.

"Everyone I talk to, they go to lengths to explain to me what this imam was like. They said he was a very quiet guy. Some describe him as pious. And others really stress the point that he just did his job, gave his sermons, worked at the mosque and went home every day. That’s all he did.’’

Ansari says community members have also told him that racial tensions are increasing.

"Some mosque congregants said in recent months [that] people, when passing the mosque, have shouted derogatory slurs or terms."

But Rahman, the student, says none of this will deter him from continuing to go to services.

"As a Muslim, you know, we shouldn’t be scared about these things. We’re not going to stop going to the mosques. These things should make us believe in our religion more and make us stronger.”

Across the world, many people have offered to accompany Muslims traveling to their mosques using the social media hashtag #IllWalkWithYou.

On Monday afternoon, a funeral prayer and a press conference was held for Akonjee and Uddin. Hundreds of people attended, including New York City Mayor Bill DeBlasio.