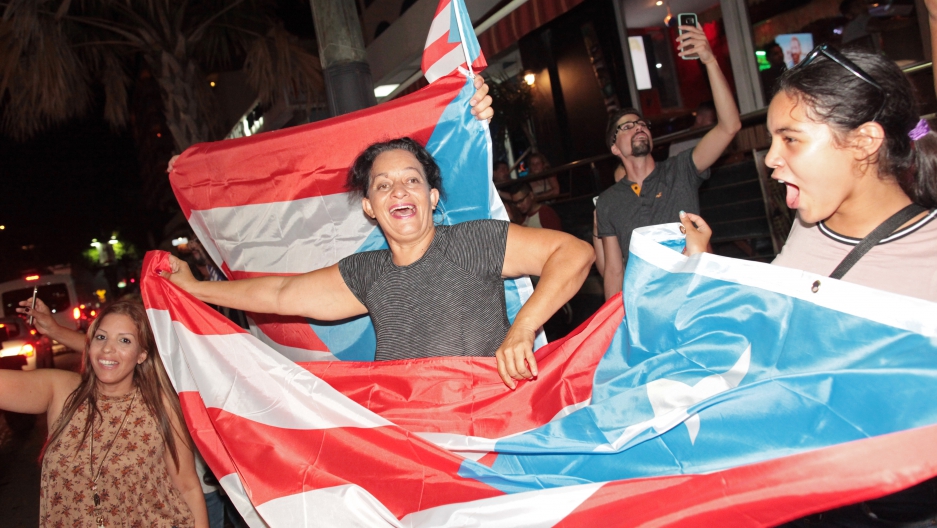 Puerto Ricans celebrate the gold medal won by Monica Puig after she beat Angelique Kerber of Germany in the Rio Olympics.

In 1948, the US territory of Puerto Rico competed as an indepedent nation in its first Olympics. Thank the International Olympic Committee for that.

The IOC has the power to determine which states get to compete as independent nations. Call it "sports sovereignty" or "Independent ... enough."

And while Puerto Rico has competed for the past 68 years, the island's athletes have never won gold. At least, not until this weekend, when tennis star Monica Puig captured the women's singles title.

And for Radio Ambulante's Luis Trelles, it was a magic night.

"It was one of the most quiet moments in San Juan in years," he says. "The time right before the match. There was a lot of expectation and a lot of anxiety as we waited for the match to begin."

When Puig won, people went wild in the streets.

"I screamed my head off!" says Trelles. "I was with friends and family watching, I think as all of Puerto Rico did that night."

Trelles says the hardest part was scrambling to find the internet feed for the game. It's tough to understand just how huge a gold medal is for a country that's never won one. (In the US, we only seem to care about how many golds a person can win.)

"It's a huge deal," he says. "I think it's especially important for an island that is a territory of the US. Some call it a colonial relationship with the US. And in that sense, national pride runs deep, but not so our sovereignty."

Sports, according to Trelles, is one of the few places where Puerto Ricans get to manifest their national identity.

"So any type of medal brings a lot of joy to Puerto Ricans, but the first gold — that's just huge!"