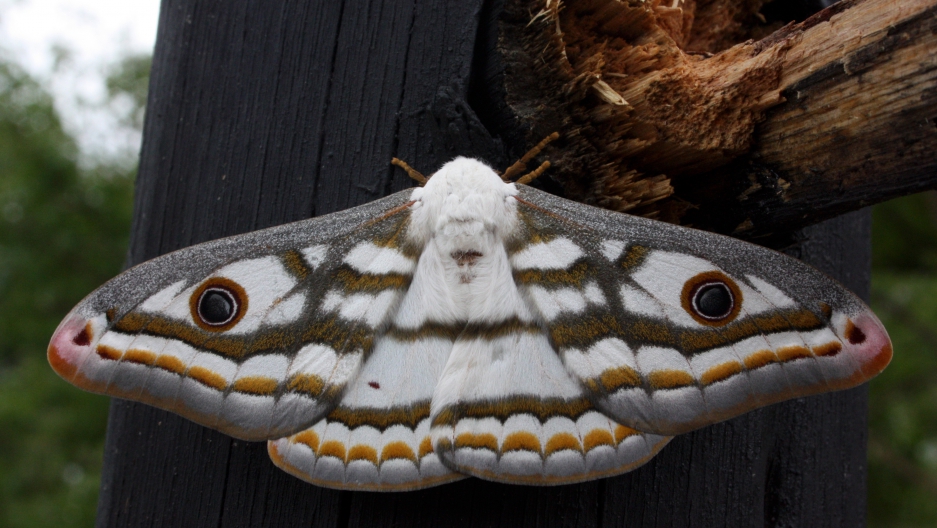 A Marbled emperor moth in Botswana.

Moths play a vital role in our ecosystems, but many people know little about them. That's why Elena Tartaglia, an ecologist at Bergen Community College in Paramus, New Jersey, thought it was time to raise awareness.

After Tartaglia had the experience of going mothing in East Brunswick, she decided to try and start a regular summer mothing night. What's mothing? Just going outside to find and record moths.

For those who have never tried mothing, Tartaglia says it’s not difficult.

“Mothing is really easy. You need no special equipment,” Tartaglia says. “All you have to do is set out a light, or turn on your porch light and then wait for them to come. And if you don't feel like sitting out all night, you can leave the light on all night and come out in the morning and you'll see what you got.”

Moths, according to Tartaglia are often misunderstood. Taxonomically, they’re not that different from butterflies, but she says there are ways to tell them apart.

“The easiest thing to do is to look at the antennae,” Tartaglia says. “Butterflies have a little spoon-shaped antennae, kind of executed on the end. And moth antennae are pretty variable. Some of them have straight antennae and a lot of the males of many species have these beautiful, long, feathery antennae... The other almost foolproof method is that ... every butterfly is out during the day. There are no night time butterflies.”

Moths are more important to our ecosystems than many people realize.

“They act as pollinators, so they aid in plant reproduction,” Tartaglia says. “Bees are great pollinators, other insects are great pollinators. But moths don't actually return to a nest at night, so they have the potential to carry pollen pretty far distances, which is really good for plant genetics because it can outcross a little farther. And additionally, moths are important parts of food webs — they provide food for birds, for bats, as well as some mammals.”

According to Tartaglia, some moth species are facing population declines, something she says is likely due to habitat loss. There are many who see moths as pests. For those people, Tartaglia offers some perspective.

“There are between 150 and 5000 species of moths in the world,” Tartaglia says. “There are a couple that are pests, and unfortunately those are the ones we interact with a lot, but the vast majority of moths are just neither helping nor harming humans and they don't care about us. We don't care about them. And then of course there are the beneficial ones — the pollinators, the ones that play important roles in food webs, the ones that we're modeling microaerial vehicle flight after.”

For those who are just trying to protect their wool coats from moths? Tartaglia has some advice.

“You can get rid of them by putting your clothes in the freezer if you have a moth infestation problem.”