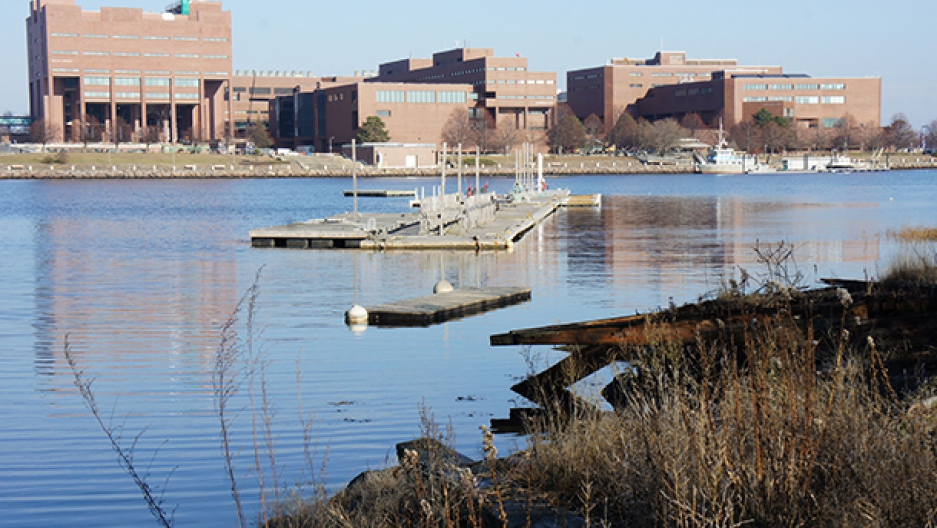 UMass Boston’s campus is about twenty feet above high-tide level. By the end of the century, it could be surrounded by water under some scenarios of sea level rise caused by climate change.

As a port city with low-lying areas, Boston, Massachusetts is particularly vulnerable to sea level rise that is expected to occur due to global warming. So, the city's mayor, Marty Walsh, is taking action now: He has commissioned a team of experts, called Climate Ready Boston, to report on how climate change will affect the city in coming years.

“The city has been working on climate change adaptation and mitigation for a while,” says UMass Boston Professor and hydrologist Ellen Douglas, who is part of the team. “But in 2012, when Hurricane Sandy devastated New York City, it made a lot of people in Boston realize that we dodged a bullet and that we need to make sure that we're prepared for an event like that.”

Climate Ready Boston is composed of about twenty people from a variety of disciplines and institutions, including oceanographers, climatologists, meteorologists hydrologists, engineers, atmospheric scientists, climate scientists and economists.

“We had people who work in consulting firms; we had people from Harvard and Northeastern and Boston University — all the local universities. It was really quite exciting and very educational to work with all these people,” Douglas says.

By mid-century, Boston should expect to see between six inches to a foot of sea level rise, Douglas says. Towards the end of the century, that figure could be as high as four to seven feet. Ten feet is the maximum estimate.

Under this worst-case scenario, South Boston and the financial district would be flooded and the Charles River dam could be over-topped or short-circuited, allowing water into Back Bay and Cambridge. “A very large part of the city that's not used to getting wet would be wet,” Douglas notes.

Most eastern seaboard cities in the US will face problems from climate disruption, scientists predict. Boston has a built-in advantage that may help it cope better than others, however. Boston has a wide tide range — about 10 feet — so a lot of the city’s infrastructure is already built to account for it. New York City’s tide range, on the other hand, is only about four feet, which helps explain why the big storm surge from Hurricane Sandy caused so much devastation.

“In Boston, if a five-foot storm surge hits, which is our extreme storm surge at low tide, we might not even notice,” Douglas points out. Nevertheless, the Climate Ready Boston task force has begun to prepare a vulnerability assessment and look at resilience strategies for the future.

Teams of researchers are mining data and looking at past reports to pull together an integrated strategy for the city. They are also doing talking to communities to figure out what most concerns them, and consulting with city and state agencies, such as Massport, MBTA and Mass DOT.

“All the agencies are figuring out how their infrastructure is going to be impacted and how their operations are going to be impacted,” Douglas explains. “It's a matter of figuring out how you're going to work that into the long-term plan. We have time, which is the good news. We have some vulnerability now, but the agencies have time to integrate this into their long-term planning, as far as upgrading their infrastructure or building new infrastructure for protection and for flood-proofing.”

Increasing heat could also present challenges, Douglas says. Average temperatures may rise eight to ten degrees over the next century, which could lead to many more 90 or 100 degree days than the city is used to. Temperatures in Boston typically top 90 degrees about 11 days a year. By the end of the century, under the worst emissions scenario, it could be as many as 90 days a year — essentially a full summer’s worth of heat wave.

“It's not even just the number of days, but it's the number of consecutive days,” Douglas points out. “After about three to five days, cooling systems just can't keep extracting the heat, so they begin to not work as well and as efficiently. It’s a real concern, health-wise, when you're looking at those kinds of temperatures.”

Despite the uncertainties inherent in these predictions, Douglas believes people must start viewing climate disruption as an emergency to be dealt with now, not later.

“Observations over the last decade have shown us that there are long-term impacts, but there are impacts that are occurring now and things are happening faster than we expected,” Douglas says. “The thing that’s striking is the number of times you hear ‘record-breaking,’” she adds. “Statistically speaking, records will always be broken, but the time between records is supposed to increase. Records are now being broken over and over, and increasingly faster. So that's what makes you realize that the climate is changing, because everything that happens seems to be a record event.”