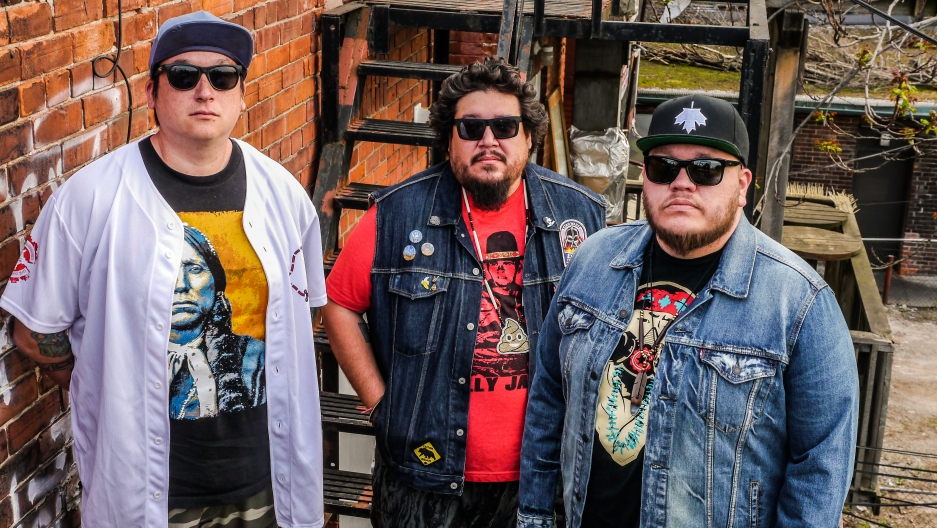 A Tribe Called Red is Ian "DJ NDN" Campeau (of the Nipissing First Nation), Tim "2oolman" Hill (Mohawk, of the Six Nations of the Grand River), and Bear Witness (of the Cayuga First Nation).

Courtesy of A Tribe Called Red

What happens when you mix hip-hop, electronica, reggae, and Aboriginal music? You get the unique sound of “powwow step” from A Tribe Called Red, an indigenous Canadian DJ trio.

Their distinct blending of First Nations music and urban contemporary youth culture is itself an act of protest. The group seeks to fight marginalization, brutality and poverty, all while playing sounds that are both ancient and fresh.

"We're making a music for indigenous people," says Tim "2oolman" Hill, one of the members of the music collective. "We've been misappropriated in film, in media — all of that stuff, forever. We've never appropriated ourselves."

Hill is a Mohawk who grew up on the Six Nations of the Grand River reservation, the largest in all of Canada. Back in 2014, he saw A Tribe Called Red perform during an "Electric Pow Wow" — a monthly club night in Ottawa — and wound up joining the group.

Hill says that A Tribe Called Red is hoping to define cultural identity on their own terms, and that context is paramount in a country where the indigenous population continues to be cast aside. The homicide rate for Aboriginal Canadians is six times greater when compared with the Canadian national average, the incarceration rate is 10 times greater, and the infant mortality rate is twice as high.

And, as if to reinforce a sense of disenfranchisement, thousands of indigenous women have gone missing — likely murdered — and no one knows why.

During performances, dancers mix indigenous styles and hip-hop b-boy moves, all while a display of stereotypical depictions and cultural appropriations are projected in the background.  When sampling, Hill says that the group tries to take community attitudes into consideration.

“We follow a protocol,” he says. “With the powwow, we made sure it was OK to do, and we’ve always listened to elders or anybody that we know that wanted to share their opinions. We do handle everything with respect and sensitivity in that sense. When it comes to Iroquoian music, that’s something we haven’t crossed yet. We are about to, and these are conversations that we’re having. For our new album, we worked with a Sami artist and we worked with an Aboriginal electronic group from Australia. We had to ask permission to use the spellings for certain songs, or even the lyrics to it, because it’s not ours, but [at the same time] it’s all of ours, it’s everybody’s.”

Hill says that indigenous people around the world have many of the same struggles. For example, A Tribe Called Red has addressed the issue of environmental destruction in their music, and at the same time, Hill says that the Sami people in northern Norway are struggling with pipelines going through traditional reindeer herding lands.

“It’s a shared experience among all indigenous people,” he says. “With the cultural genocide, with residential schools, they tried to kill the indian within the indian and tried to turn us into them. Because of that, we still have that connection with land and we feel that there is a duty to protect it.”

For Hill and many others, just existing together is something of an act of courage.

“Us throwing a party night for indigenous people in Ottawa is a political statement,” he says. “I think that if other people just educate themselves and understand where we’re coming from, we can start having these great conversations that could possibly end a lot of things that are wrong.”

A Tribe Called Red’s forthcoming album, "We Are The Halluci Nation," will drop on September 16.