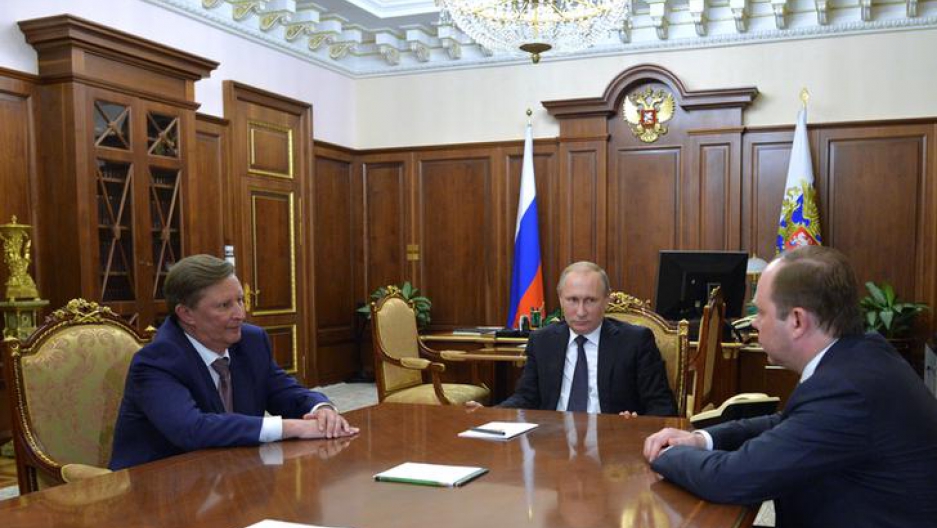 In a surprise move, Russian President Vladimir Putin replaced one of his longtime and most powerful allies in the Kremlin — his chief of staff — and appointed him as an envoy on environmental issues.

If you believe Putin, Sergei Ivanov left at his own request after a period of loyal service. Ivanov's deputy, Anton Vaino, will take his place. Speaking at a press conference broadcast on Russian state TV, the three men sat around a table in the Kremlin to discuss the changes. President Putin said he hoped Vaino would do well in the job.

"Anton Eduardovich [Vaino], I wish you success in your new role. I hope that you work effectively, professionally, energetically," he said.

But some observers are trying to look past the Kremlin spin. Many believe Putin has sacked his Kremlin partner. Which begs one question: Why?

Ask Moscow-based reporter Charles Maynes, and he'll tell you that no one in Moscow really believes Ivanov requested his own dismissal. "But no one really knows. Moscow is mostly mystified by today's events."

So theories abound. Among them is the belief that this Kremlin shakeup is about "getting things done." Russia's parliamentary and regional elections are just weeks away, "so there's a lot of political pressure to have the elections appear legitimate," says Maynes. "It has implications for Putin's long-term political survival."

The last thing the Kremlin wants is a repeat of widespread mass protests in response to what were perceived to be fraudulent elections in 2012. "Kremlin officials really don't want to see that happen again," Maynes says. The latest Kremlin maneuver follows several other shakeups involving regional governors being fired for corruption and incompetence, as well as putting in place a new cadre of technocrats and security personnel.

Russia's Vladimir Putin dismisses his chief of staff Sergei Ivanov, part of his inner circle for many years https://t.co/4cpGfTLBFK

Another theory is that Putin is assuming the role of a Soviet-era leader.

"He's replacing people who knew him when he was essentially no one. Remember that Ivanov has known Putin since they were KGB officers. They've been friends for 40 years, and that he formed part of this modern day Politburo that existed in Moscow," Maynes says. "His replacement, Vaino, is a career technocrat who's only known Putin his whole life as Russia's great leader. So it's hard to imagine him providing the kind of counsel in the same way that Ivanov once did."

A third possibility is that the Kremlin shuffle is about keeping the elite in Moscow nervous, says Maynes. "The Russian economy is struggling and Kremlin officials and insiders have been enmeshed in a series of scandals that have certainly tested Putin's loyalty to his friends because the graft has been in certain instances so outrageous. ... So I think it sends a signal that no one's safe."

Whatever the reason for the Kremlin switcheroo, it's a shocker. "It's not often that you get to witness in Putin's Kremlin, someone go down. Ivanov was Putin's go-to-guy for a long time. Whenever Putin needed somebody to trust, he put Ivanov in that spot, as defense minister, deputy prime minister, chief of staff until today. And he was touted for awhile as a possible successor," Maynes says.

Putin: "I'm satisfied" with your work. Ivanov: "Thanks" & with that, S.I. left 1 of the most powerful jobs in Russia pic.twitter.com/d1C7LaS5g4

As for Ivanov's successor, Vaino has been nicknamed in Russian social media as Mr. Umbrella after he famously was caught in a photo holding an umbrella over Putin. He's widely seen to be a yes-man, someone who's there to agree with whatever Putin says.