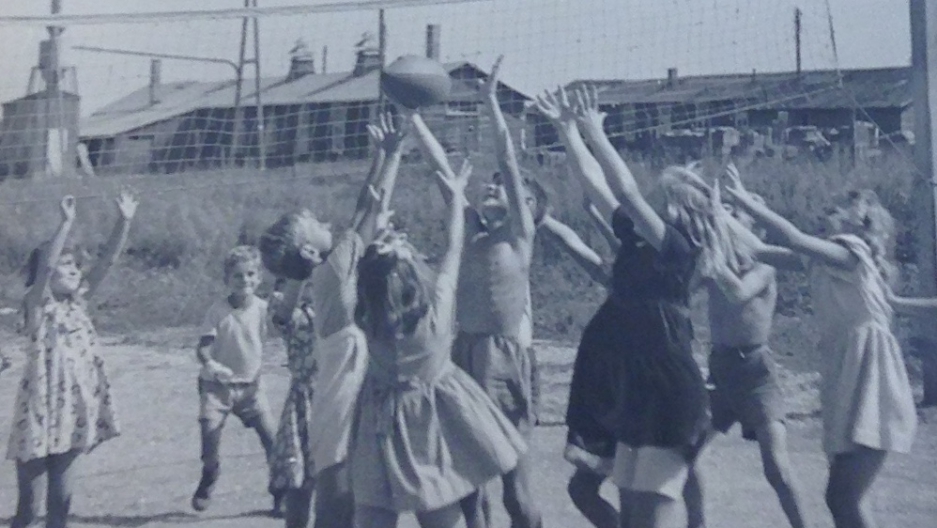 A group of children play on a volleyball court at Camp Altenstadt, a refugee camp in the US Zone of Allied-occupied Germany in August, 1950.

When 10 athletes from four war-torn countries stepped onto the floor of Rio’s Maracanā Stadium during the opening ceremony of the 2016 Olympics, they made history. Never before has a team of refugees participated in the games.

It’s not hard to imagine the millions of people in refugee camps around the world today cheering them on. There’s a good chance many of them are athletes themselves.

It turns out that refugees have been turning to sports to pass the time and cope with the stress of displacement for decades.

The United Nations and the International Olympic Committee, along with many other groups, commit time and resources to develop sports programs at refugee camps. In June, for example, a UN envoy announced $400,000 in support for sports programs in six camps in Rwanda. A 2013 publication for the Académie Internationale des Sciences et Techniques du Sport said sports are more than a way to socialize and blow off steam. Sports can also help refugees manage trauma and find normalcy in the extraordinary situation of being driven from home.

After World War II, when conflict and persecution displaced millions of Europeans, international humanitarian and social welfare organizations banded together. The United Nations, Middle East Relief and Relief Administration, Red Cross, Save the Children Fund and other groups pitched in to help operate refugee camps throughout Europe and the Middle East. Together, they organized recreational and educational opportunities to help refugees pass the time as they waited to be resettled and resume their lives.

Perhaps no organization did more to create opportunities for refugees to participate in sports, though, than the YMCA.

After the war, hundreds of thousands of refugees ended up in camps in Allied-occupied Germany, where the US, Britain, France and the Soviet Union maintained control over zones of the country.

From the late 1940s to the early 1950s, the YMCA sent staff and volunteers to work in refugee resettlement camps in the US Zone. Monthly reports about the organization’s work —  which researchers can access via the Kautz Family YMCA Archives at the University of Minnesota’s Andersen Library — reveal that the YMCA actively extended its mission of giving young people opportunities to grow intellectually, spiritually, socially and athletically to European refugees. 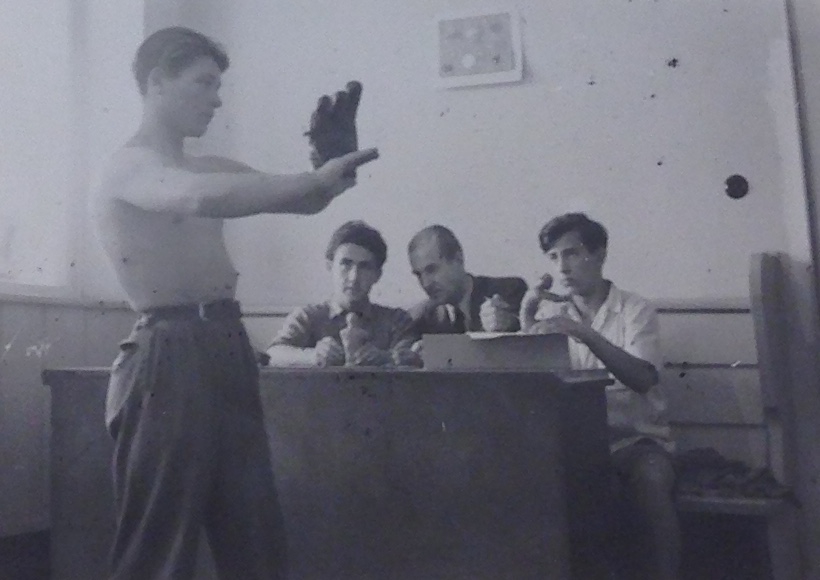 Sports were integrated with other activities at refugee camps. Here, a young man poses with a baseball mitt and acts as a model for students in a sculpture class in September, 1949.

The YMCA offered many activities and services at camps in Altenstadt, Amberg, Augsburg, Bremen, Butzbach, Ludwigsburg, Munich and Schweinfurt. They believed that educational courses, film screenings and access to libraries, concerts and church services would prepare "displaced persons for life in the normal society of their future homelands.”

Sports were one of the most popular services offered by the YMCA. From 1949 until 1952, when the majority of camps for refugees and displaced persons were closed, tens of thousands of camp residents participated in casual and competitive games. 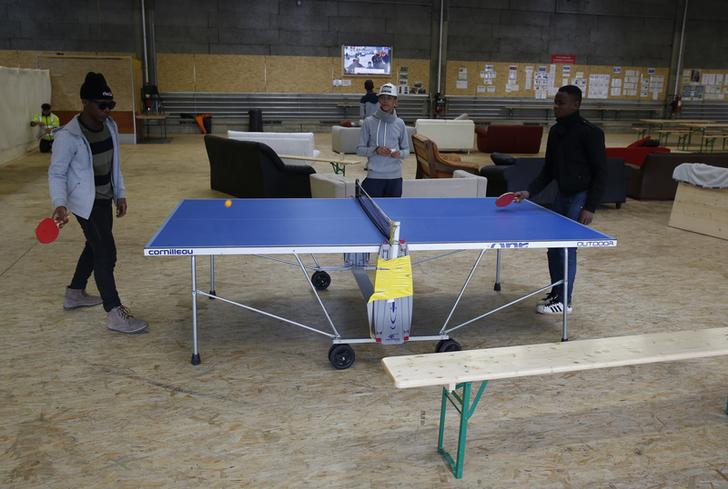 In the past and in the present, ping-pong has been a favorite sport among refugees. Here, two young men play ping-pong at a Swiss Federal refugee center on an army base in Thun, Switzerland on March 22, 2016.

Soccer, softball, basketball, volleyball and ping pong were among the most popular, though young people also participated in boxing, track and field, tennis, swimming, gymnastics and more casual games like potato sack and egg-and-spoon relay races.

In addition to sporting events at general population refugee camps, sports played a major role at camps that were created specifically for children who were displaced from their homes and separated from their families. For example, the “Children’s Village” in Bad Aibling, about 40 miles from Munich, not only allocated resources to develop grounds where young people could play with one another, but also incorporated sports like gymnastics into children's daily educational routines.

Like today, the Olympics were a major source of inspiriation for sporting events in US Zone resettlement camps. For example, the YMCA periodically organized an International Youth Sports Festival that brought together refugee children from camps throughout the US Zone. Nearly 2,000 spectators came to watch more than 140 refugees compete against one another in track and field events on September 24, 1949. In their credo printed in the program for the festival, the young participants evoked the Olympics:

“We consider that sports are means by which mankind can be united. Therefore, we give our oath on behalf of our nations to participate in these games as honorable sportsmen in every sense of fair play. May these games be a demonstration of our best will in the common efforts fostering international friendship, understanding and worldwide youth-fellowship. May the Almighty, Who rules over all, see our efforts and help us in keeping on the road of truth, fair play and sportsmanship. May the spirit of the Olympic flame burn in our hearts.” 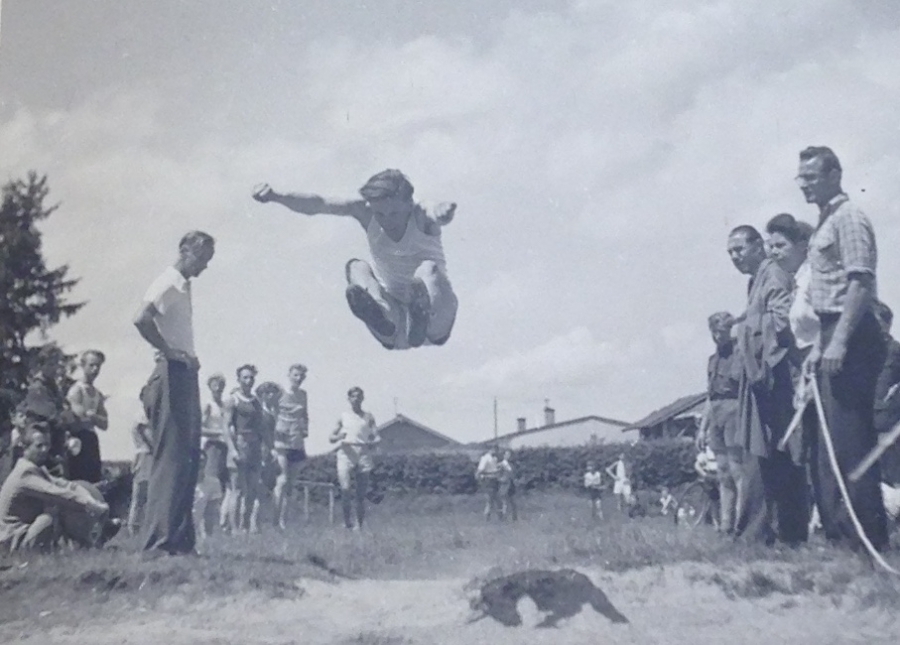 A young man beats the competition with a long jump of 5.7 meters at the International Youth Sports Festival, held at the Children's Village in Bad Aibling on May 27, 1950.

A Sports Leaders Training Course held in Prien in October 1949, featured Gustl Stürk, a track and field coach who trained the Indian and Bulgarian Olympic teams and was a major pole-vault contender in Germany. When a group of girls in the Children’s Village organized a sports club, they named it none other than “Olympia.” 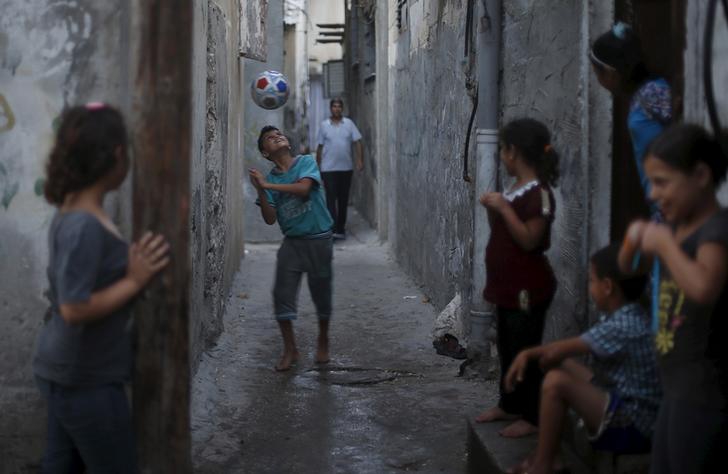 A young Palestinian boy plays with a soccer ball near his family's residence at the Shatti refugee camp in Gaza City on July 28, 2015.

Camp officials even organized an event modeled after the Olympic Games in 1951 that brought refugee children in the US Zone together with German youth to compete against each other.

Echoes of the YMCA’s emphasis on the benefits of athletics for displaced children are still visible in refugee camps around the world. “When conflict strikes, children are hardest hit and face terrible dangers," David Bull, executive director of UNICEF’s UK branch, said in a statement. "Many lose their families, their homes and their schools. When a child’s life is turned upside down, sport can be a vital and familiar comfort in an otherwise distressing world.”

Sports are part of life in camps from Jordan to Sudan, Syria to Greece. For some, sports can be a strategy for survival. Spirit of Soccer, an international organization that has worked with refugees throughout the Middle East, says it uses the sophisticated footwork of soccer to teach children how to dodge landmines.

It’s a stark reminder that while we root for the refugee Olympic team, millions of other refugee athletes in camps around the world need support, too.