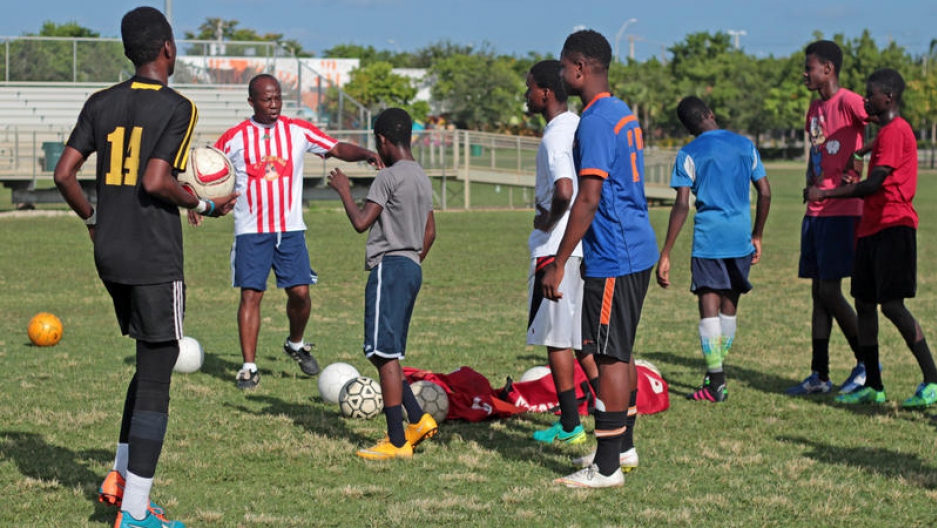 Ernst Baptiste, coach of the Little Haiti Football Club boys team, directs his players onto the field to start drills.

On game days, the boys’ soccer team at Miami-Edison Senior High speaks Haitian Creole during huddles, and fans play Rara, Haitian carnival music with drums and horns, in the stands.

The school is smack in the middle of Little Haiti, with a student body that in many cases is just beginning to master English.

“When I took the program over,” says Gomez Laleau, who started coaching there in 2004, “99 percent of them were Haitian-descent kids, and college was not part of the discussion.”

In his first year, Laleau rented a van and drove his team up to Georgia State University to give his players a taste of the possibilities. They slept in a single hotel room and took part in soccer tryouts the next day. A handful even made the team, with potential scholarship offers to match, he says, but none was ready to leave Miami. They gave him several reasons.

“You know, Coach, I cannot leave because if I leave, and I’m the only one here with my mom, and she has nobody else,” he says, recalling what some of his former students told him.

“And I’d say, ‘I understand that, but if you want to help your mom ... she’s struggling, the best thing is to move away, get a degree — and come back.'" 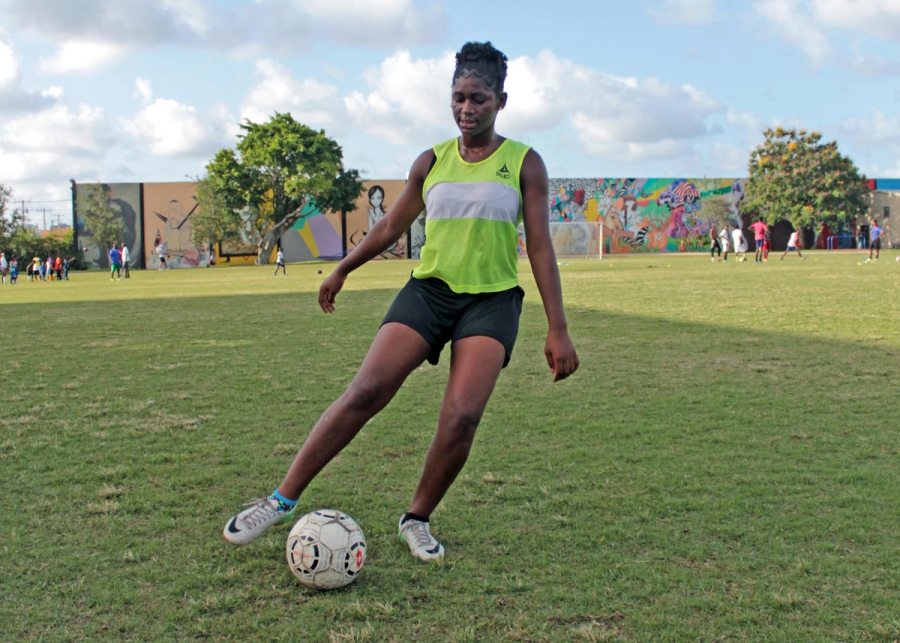 Wadeline Saintjuste is starting her freshman year at Silver Lake College in Wisconsin. She says it was hard to make the decision to leave her family in Miami.

Eleven years later, Laleau is in the bleachers at Little Haiti Park, watching his fellow coaches run players through drills at Little Haiti FC, a soccer club he founded in 2014. This is where many of the Edison players stay in shape during the off-season.

Both boys and girls from Edison are headed to play college soccer out of state. Wadeline Saintjuste, 18, says leaving Miami for Wisconsin was a difficult choice.

“Sometimes when I think about my mom, that I’m going to leave her,” Saintjuste says with a sigh. “Like, she have other kids, but only me; I’m the first one in the family ... going to college."

She and classmate Tchepsen Noreus are going to Silver Lake College, a small Catholic liberal arts school in Manitowoc, Wisconsin.

They leave this weekend, but Noreus says it feels pretty remote from the northern Haitian city of Port de Paix, where he lived until two years ago. 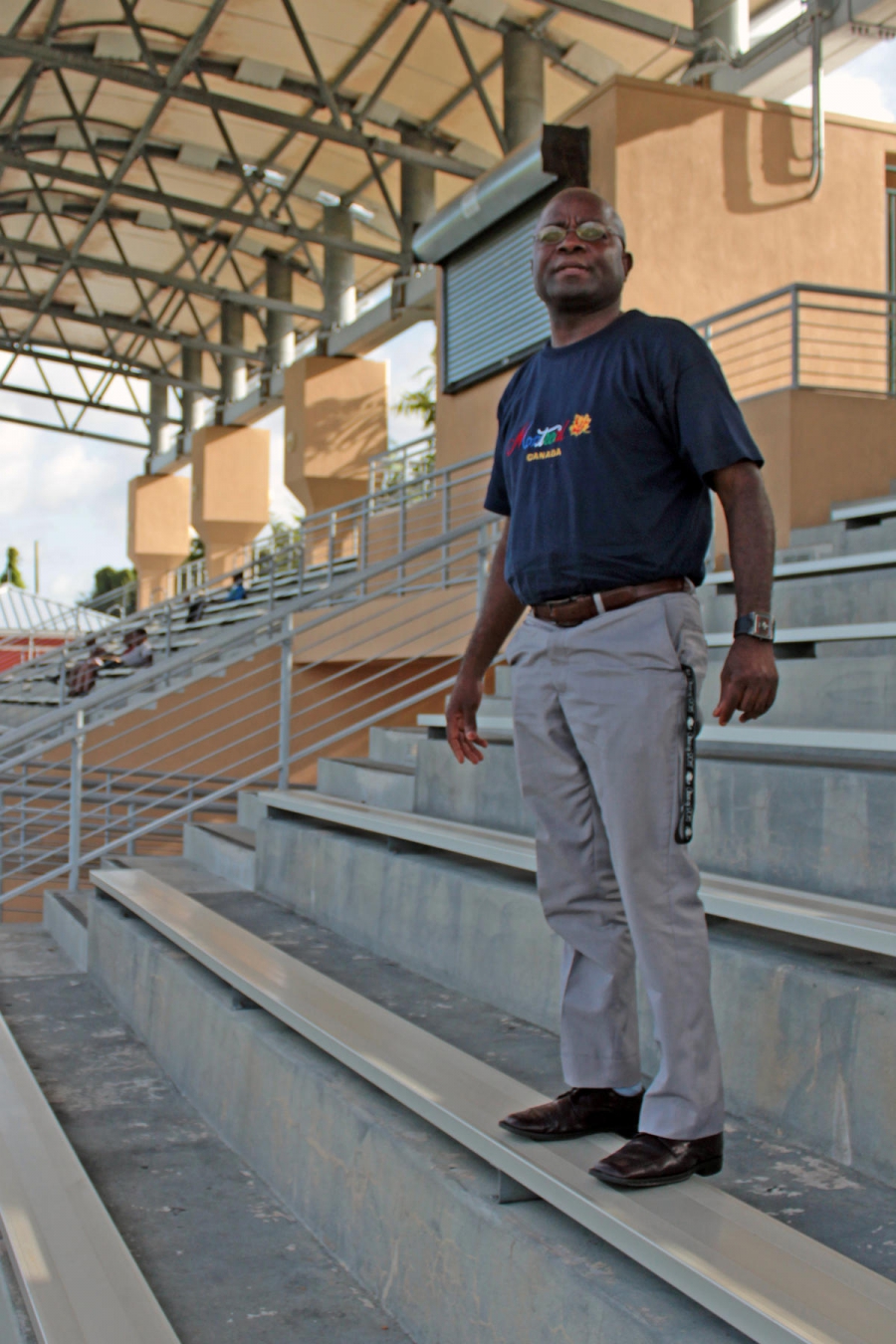 “To be honest, when I was in Haiti I never thought that I was going to have a scholarship to go to college for soccer, but when I came here, I’m like, I've got to play soccer, because that’s the only thing that can get me out of my life.”

All told, 14 Edison soccer players are heading to college on scholarships this year. That reflects the school’s athletic talent and, players say, a stern focus on behavior and grades. In school, players report to the library for tutoring before soccer practice, and they have to carry around a weekly progress report to each of their classes.

“Afterwards I got to return it back to Mr. Laleau,” Noreus says, adding that he gets As for behavior. On the academic side, he says sheepishly, “Sometimes it’s C, but it’s A and B.”

Edison has yet to send players to top-shelf soccer programs, but by focusing on small schools with more flexibility, coach Laleau has carved out a niche for players who are undocumented, or whose English is still a work in progress.

On the field, the boys’ team has quietly become a local powerhouse, competing against kids who play on travel teams year round. Noreus says other teams have a way of reminding them that Edison is still an underdog, but it just makes them more determined.

“Yeah, we've got to play angry to show that what they think about us is not true,” he says.

There’s another reason, too.

“We know where we came from,” he says. “We've got to work hard so we can be something in life.”