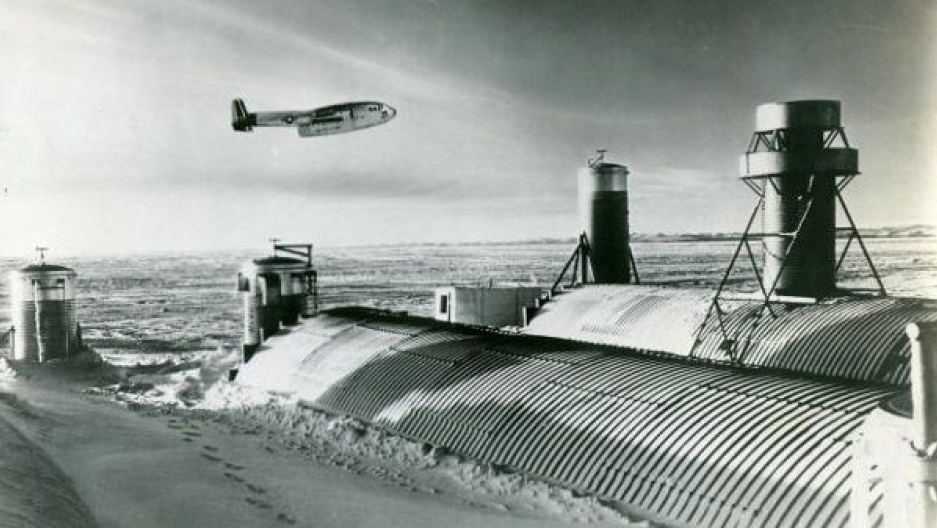 The US Cold War-era Camp Century in Greenland was abandoned when it was discovered the ice sheet was moving faster than expected.

By 2090, layer after layer of the Greenland Ice Sheet will vanish, exposing a once-top secret US military base established during the Cold War.

Camp Century was part of a secret plan to test the possibility of deploying nuclear missles aimed at the Soviet Union under the ice in Greenland.

Not only would the base's once classified infrastructure be revealed, so too would the potentially hazardous waste left behind. This includes sewage, diesel fuel, toxic chemical compounds like PCBs — a multi-purpose industrial chemical — and some low-level radioactive waste from the camp's nuclear generator. All that could re-enter the environment and potentially disrupt nearby ecosystems, says William Colgan, one of the lead authors of the study.

The PCBs could pose the biggest threat to the environment and human health. According to an article by Science Magazine, the military used paints containing 5 percent PCBs at other Arctic sites built around the same time.

See related: In Greenland, a climate change mystery with clues written in water and stone

Camp Century was built in 1959, during the height of the Cold War, to support Project Iceworm — a way to explore the "feasiblity of deploying balistic missiles on rail cars just beneath the surface of the Greenland Ice Sheet," says Colgan, an assistant professor at York University in Toronto. The project was abandoned when scientists discovered the ice sheet was moving more rapidly than previously thought, which would describe the base (and any missile infrastructure subsequently built) in as little as five years.

The base was evacuated and the waste was left behind.

"The waste plan was that it would be entombed for eternity under perpertually accumulating snowfall," Colgan says. 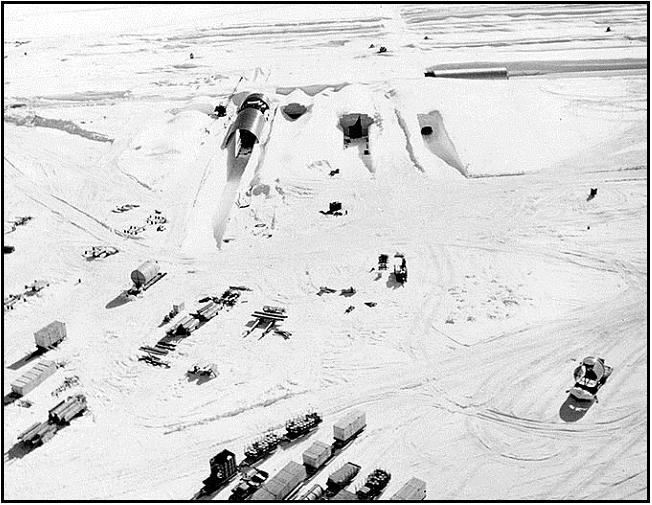 Entrances to Camp Century in northern Greenland during construction in 1959.

​But the US Army Corps of Engineers, who built the base, didn't anticipate climate change. Now the base may become a problem for relations between Denmark, which governed Greenland at the time, and the US. It wouldn't be the first time — the base's nuclear purpose wasn't disclosed to the Danish government and caused a firestorm of controversy when revealed in the 1990s.

"In addition to a non-trivial environmental hazard, there is a bigger political hazard on how to deal with this type of unexpected multi-generational and multi-national challenge presented by climate change," Colgan says.

In other words, it's unclear who would be responsible for the clean-up. Complicating matters is that Greeland has become semi-autonomous, meaning that though it wasn't a party to the original agreement, it may ultimately be stuck with the cleanup — though it still retains ties to Dennmark.

As of yet, Colgan says there hasn't been any significant melting at Camp Century. Because the campground is still buried beneath the ice and snow, it's better to leave it that way.

But Camp Century isn't the only US military base that's been abandoned in the Arctic.

"The ice sheet in Camp Century is a very special case, but there's a broad analogy with sea level rise and low elevation waste sites around the world and how to deal with those in the coming century." 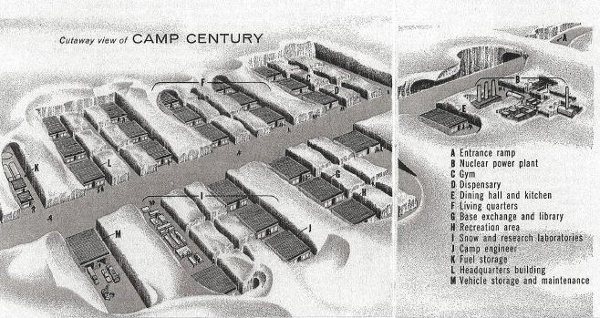 A cutaway view of Camp Century. The facilty dug into the Greenland ice sheet housed up to 200 soldiers and a small nuclear power plant. The reactor and its fuel were removed when the camp was closed, but a small amount of low-level nuclear waste was left behind, along with sewage, fuel, chemical waste and most of the infrastructure.