The first offshore wind turbine in the US being erected in August 2016 off the coast of Block Island, Rhode Island.

Construction on the five-turbine, $250 million project will finish this summer. When the wind farm starts generating power late this year, it will be the first to operate off the coast of the US.

As offshore wind gets its start here, project developers have leaned heavily on expertise from Europe, where offshore wind has a 25-year head start.

The five wind turbines are being assembled this month by a special Norwegian installation ship about three miles off the coast of Block Island, a popular vacation spot about an hour’s ferry ride from mainland Rhode Island.

The windfarm is relatively small, 30 megawatts, enough to power about 17,000 homes. It’s small by design, meant to prove that offshore wind can work off the coast of the US and pave the way for larger wind farms.

Offshore wind has been slow to arrive in the US in part because of regulatory delays and opposition from influential coastal residents. A wind farm proposed more than a decade ago off Cape Cod would have been the first in the nation but was derailed by opposition from residents.

That didn’t happen on Block Island.

“The people who live and work here feel strongly that we need to do things for our environment, so there’s a real philosophical belief in [clean energy],” says Kim Gaffett, who directs an environmental foundation on Block Island and was head of the island’s town council when the windfarm was proposed. 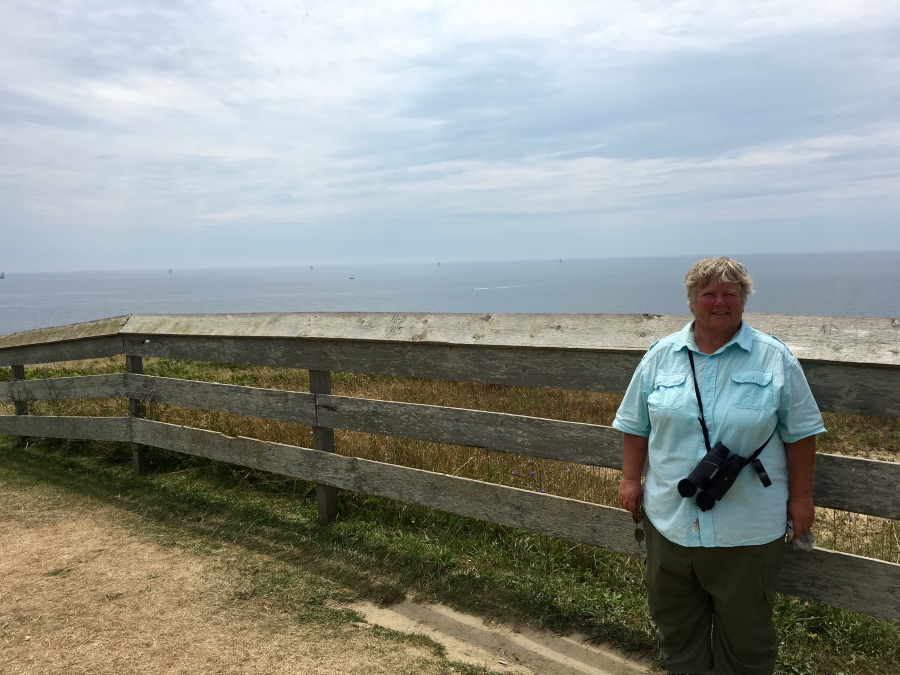 Kim Gaffett stands on a bluff on the southeastern side of Block Island. Five foundations for offshore wind turbines are visible on the horizon.

Block Island is known for its quaint main street and its long, sandy beaches and nature preserves.

The year-round population of about 1,000 multiplies to several times that in the summer months.

The island attracts visitors and residents who value nature, which Gaffett said helped the offshore wind project succeed here when others have failed elsewhere.

The island isn’t connected to Rhode Island’s grid, so it currently burns diesel that has to be shipped there from the mainland to generate electricity. That means the island’s electricity rates are among the highest in the nation. In most of the rest of the country offshore wind would cost much more than energy from other sources. But on Block Island, it might actually prove cheaper.

“There was a real advantage to trying to find an alternative way to produce power that was less expensive,” Gaffett said.

Turbine construction is being coordinated from the Port of Providence, about 50 miles away from Block Island, where the European influence is noticeable.

French, Dutch and Spanish accents are just a few you can hear walking through the temporary office that serves as the logistical hub for the project. 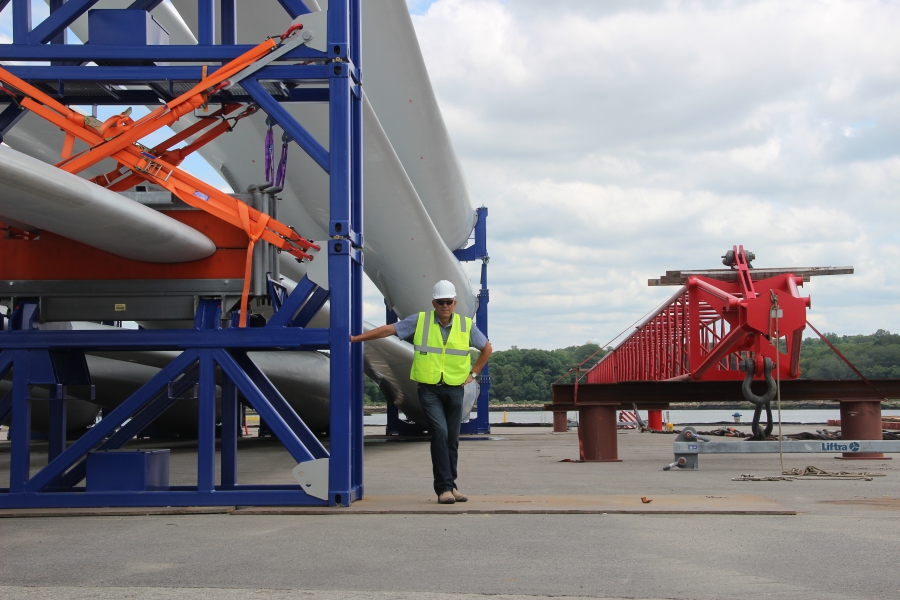 Deepwater Wind president Chris van Beek in front of turbine blades about to be shipped offshore to the Block Island windfarm.

“If you add up all nationalities working on this project, probably you come to 20 or 25 nationalities,” said Chris van Beek, president of Deepwater Wind, the project developer. Van Beek is a Dutch citizen who worked in offshore energy for 25 years in the Netherlands before moving to Rhode Island.

The US is new to the offshore wind game, so Deepwater Wind is getting some of its expertise and most of its huge turbine parts from Europe.

Outside the Port of Providence, van Beek pointed out tower sections and 250-foot long blades waiting to be shipped out to Block Island.

Those Danish blades were elegantly tapered, like skinny airplane wings, and stacked horizontally in a type of storage scaffolding.

The US has been slow to adopt offshore wind partly because it has lots of wide open land that’s good for cheaper, onshore wind. It has domestic natural gas and coal, and comparably low electricity prices. And it has bureaucracy that has yet to be streamlined. Deepwater Wind had to get approval from roughly a dozen state and federal agencies for its wind farm.

“It’s harder here,” van Beek said. “There’s no template for it, so what we do is a lot of meetings with the regulators, sitting there and saying, this is how we want to do that.”

Regulatory wrinkles are beginning to be ironed out as East Coast states work with developers to meet ambitious new renewable energy goals. States want to tap into the winds that blow hard and consistently off the coast. 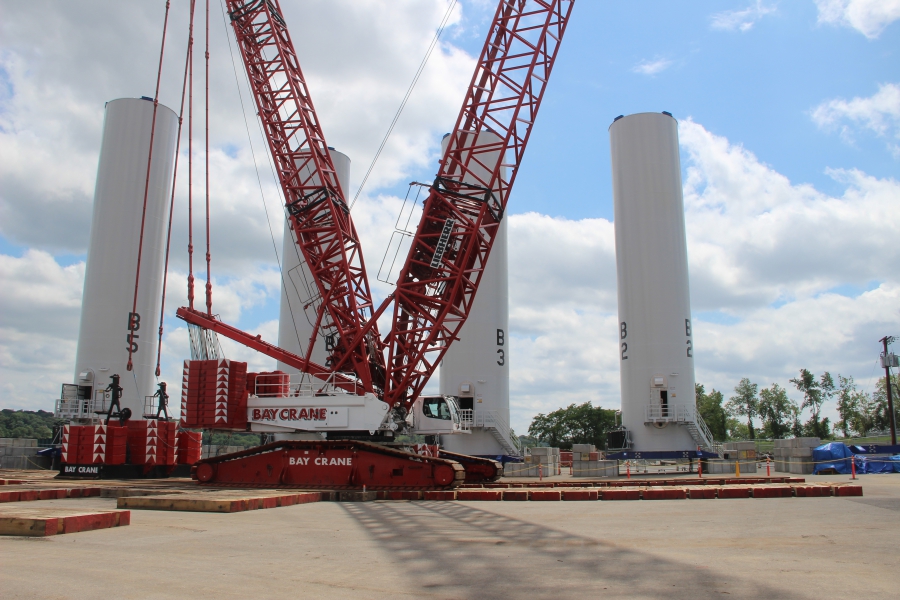 The bases for four wind turbine towers await shipment at the Port of Providence on August 1.

Massachusetts Governor Charlie Baker this month signed a law requiring utilities to work with offshore wind developers to build enough wind energy to power about 240,000 homes in the next decade. Baker said that represents one of the largest commitments in the country to renewable energy.

Still, the public hasn’t totally been won over to offshore wind, even on eco-friendly Block Island. The wind farm is still controversial there — a topic, like politics and religion, you don’t talk about at a dinner party.

Teenager Tatum Shaw said the wind farm ruins the view from a bluff near her family’s summer house.

“You face a certain way and it’s ugly and you see them and they look super up-close,” Shaw said, “and then when you face the other way it’s natural and beautiful like it’s supposed to be.”

The turbines are clearly visible from the southern coast, even on cloudy or foggy days. They’re easy to spot from the grounds of a historic brick lighthouse situated on a high bluff on the southeastern part of the island.

But on a recent visit to the lighthouse, former town council head Kim Gaffett was quick to point out that not everyone agrees with Tatum Shaw’s assessment of the turbines.

Gaffett hopes this interest paves the way for the bigger offshore wind projects that are in the pipeline. And that one day, the US coastline will look a bit more like Europe’s.