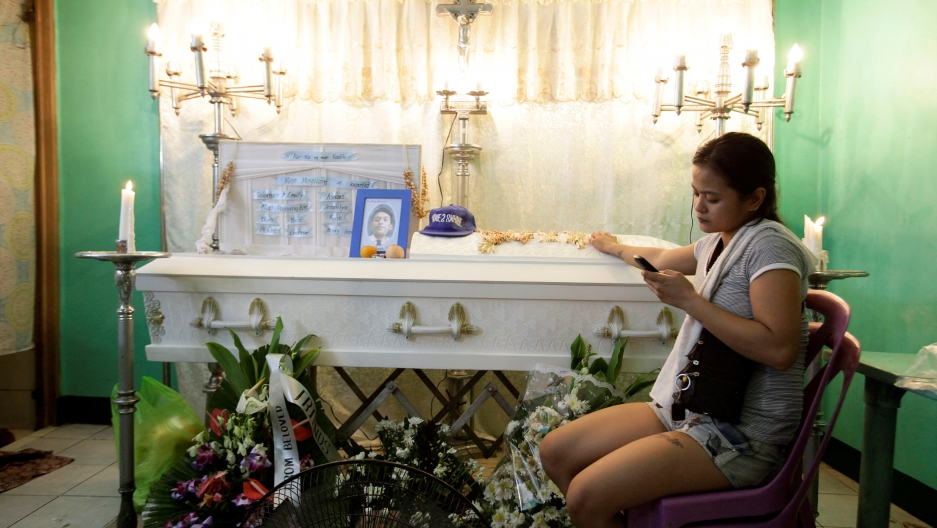 Jennelyn Olaires, the partner of Michael Siaron. Police say he was killed by a vigilante group in Manila.

When he ran for the presidency, this candidate rallied voters with menacing pronouncements.

He liked to drop obscenities and vowed to launch a "bloody war" on crime and corruption that would sweep aside political niceties.

He offered a simple formula for dealing with criminals and drug addicts.

And since candidate Rodrigo Duterte was sworn in as the president of the Philippines in late June, he's made progress on those pledges.

Hundreds of corpses have been turning up on streets throughout the country. The bodies often appear beside crudely written cardboard signs, detailing the individual's supposed crime.

"They're saying this is his success, it's the success of his first months in office," says Tom Smith, who follows southeast Asia closely and lectured at De La Salle University in Manila. "They say there's more to come."

Smith says Duterte's all-out war on drugs and crime has given way to "carnage on the streets of Manila and elsewhere throughout the country." Human rights groups are denouncing the killings of more than 700 suspected drug users or dealers in the past three months. They're calling on the UN to take a stand opposing the violence.

Read Tom Smith's piece on Duterte's Philippines for The Guardian

It's not clear how many of the extra-judicial killings are the work of police, and how many are carried out by vigilantes. But Smith says what is known is that the new leader of the Philippines isn't doing anything to stop the killers.

Duterte, the 71-year-old former mayor of Davao City, says his "adherence to due process and the rule of law is uncompromising."

During his tenure as mayor of Davao, crime rates fell dramatically. Duterte didn't deny using death squads to bring order. Human rights advocates estimate that more than 1,000 Davao residents were executed without the benefit of a legal process.

"He was not shy about using very rough tactics to do that, and it looks like it's now being played out on a national level," Smith says. "He has painted himself as a blank canvas to do some thing different. What exactly that something different is, is of course a different question."