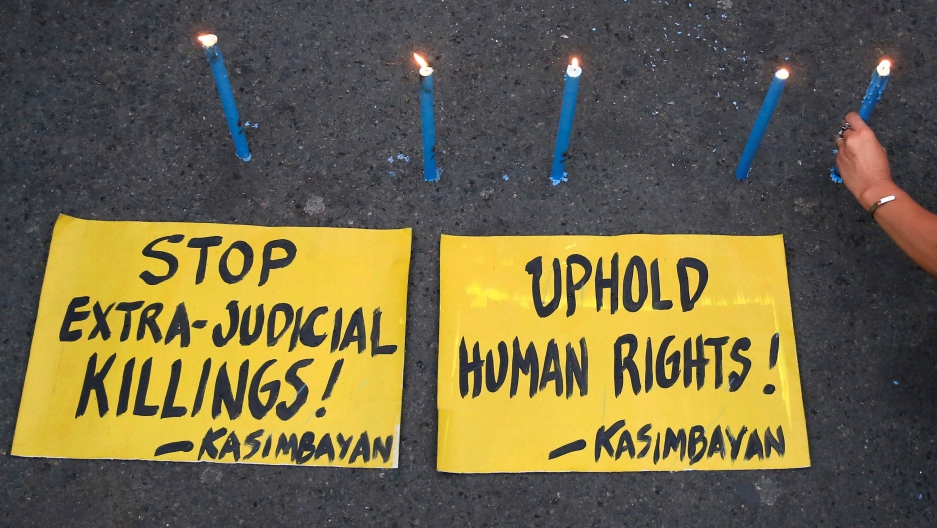 Human rights advocates offers prayers and lights candles during a call for justice for the numerous extrajudicial killings, which have increased since President Rodrigo Duterte took office, at the Redemptorist church in Paranaque city, Philippines, August 10, 2016.

Nearly 800 Filipinos have been killed as a result of an extreme anti-drug policy rolled out by newly-elected President Rodrigo Duterte.

Since taking power in May, Duterte has ordered the police and military to kill suspected drug dealers and users without due process. The policy has also spurred a wave of civilian vigilantism, which has prompted over 600,000 Filipinos to voluntarily turn themselves over to authorities. A local newspaper is keeping tally of the victims through a "Kill List."

“This lawless killing by citizens and by police of people who are suspected of either using or selling drugs, but without due process and without trial, is really an unprecedented situation,” says Hannah Hetzer, senior international policy manager with the Drug Policy Alliance. “It’s an extreme violation of human rights, and unfortunately the president is showing no signs of backing down.”

On Sunday, Duterte, who was quoted as saying he didn't "care about human rights," announced that he expanded his hit-list to include 150 government officials. In response, more than 300 international human rights groups, including the United Nations, formally condemned these extrajudicial killings.

“The president has actually promised to pardon any police officers who have human rights cases brought against them if they kill anyone suspected of drug offenses,” Hetzer says. “He’s also promises medals for any citizens or vigilantes that [participate]. It seems that right now there is an atmosphere where opposition is not possible — any judge or any congressman who tries to bring a case against the president could potentially also be labeled as embedded with the traffickers and face prosecution themselves.”

Hetzer says these extrajudicial killings are likely to continue, unless the international community takes action. However, despite these reports, the United States recently provided $32 million in law enforcement aid to the Philippines.

According to Hetzer, fear is driving this violent anti-drug campaign. Only about 3 percent of the population uses drugs “problematically,” and on the whole, drug trafficking operations in the Philippines are much smaller when compared to places across Latin America.

“Even at the 3 percent mark, this isn’t an overwhelming problem,” Hetzer says. “These people need help and treatment, instead of murder. I think that the president is just using the drug scare as a way to go ahead with his anti-crime campaign and quash opposition.”

Hetzer says that the weakest people are the ones feeling the brunt of this violent crackdown.

“It’s often much harder to actually catch those higher up in the [drug] organizations,” she says. “So when you have people shooting others in the street, they are unlikely to be the heads of big drug cartels, and those that are the heads of big drug cartels travel with bodyguards and are much more protected. This, as with many other anti-drug campaigns, falls heavily on the shoulders of the most vulnerable.”