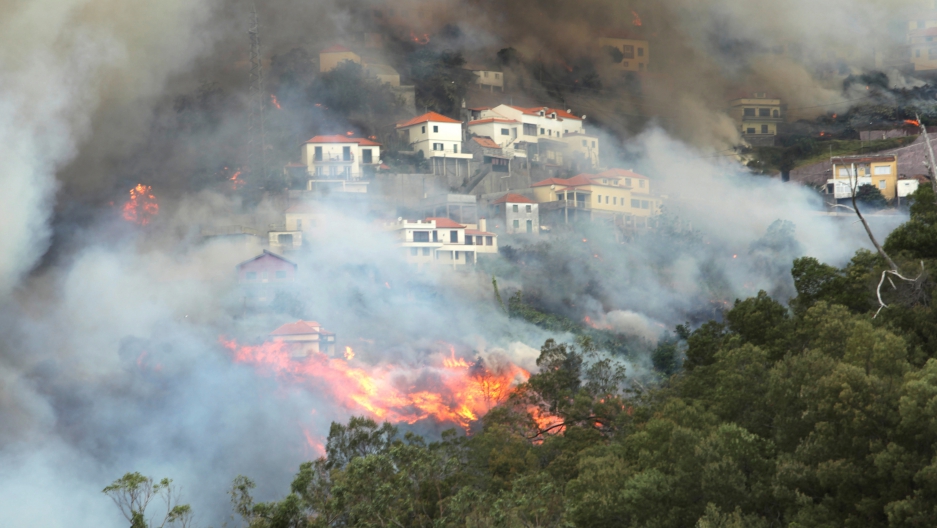 Three people have died in raging forest fires on Portugal's holiday island of Madeira where flames damaged homes and a hotel and forced around 1,000 people to flee.

Portugal urged its European partners Wednesday to help in battling multiple blazes on the island known as the "Pearl of the Atlantic".

The three perished in their homes close to the historic centre of the capital Funchal, while a hotel overlooking the town was destroyed and other buildings were licked by flames, officials said.

Firefighters worked through the night training jets of water high onto the orange flames against the dark night sky in Funchal's narrow streets to try to protect its historic heart.

"Last night, the fire was a hundred metres (yards) away from the hotel and you could hear gas bottles exploding," Ricardo Correia, a manager at the hotel Castanheiro, told AFP.

"We evacuated our 140 guests as a precaution," Correia said, adding that they had spent the night in a sports stadium on the western side of the town.

"The situation was calmer this morning and the clients are progressively returning," Correia said.

The president of the Madeira region, Miguel Albuquerque, said the fire was still burning on several fronts but was "under control".

"The situation is complex but not catastrophic," he told reporters.

Fires began in the hills around Funchal late on Monday but 24 hours later worsened dramatically, fanned by strong winds.

A vast ball of smoke was seen above Funchal the following day with the evening sky turned orange by the flames, prompting locals to photograph the scene from surrounding hills.

"Roughly 1,000 people had to be evacuated from homes and hotels," among them both residents and tourists, the Lusa news agency quoted Funchal mayor Paulo Cafofo as saying.

Holidaymakers from Britain and Germany had to be evacuated from their hotels and were being put up by local authorities, diplomatic sources said. None was hurt.

Hospitals and old people's homes were evacuated as flames advanced on built-up areas.

Around 600 people holed up in a Portuguese military base, sleeping on camp beds, and 300 were evacuated to the Barreiros stadium, Cafofo said. 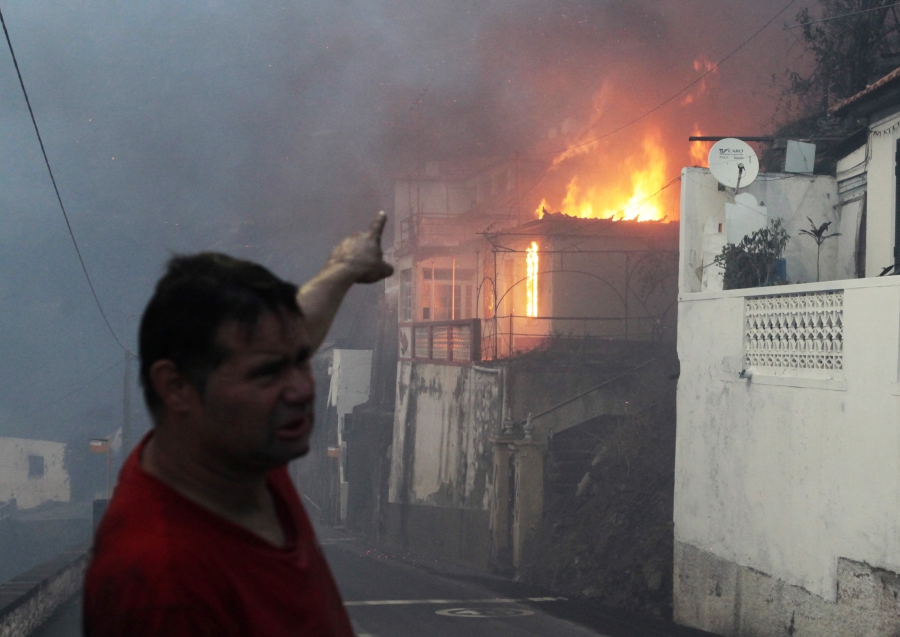 A man gestures as house burns as a wildfire spreads at Bom Sucesso in Funchal, Madeira island, Portugal, August 9, 2016.

Portugal has sought fire-fighting planes from its European partners, an interior ministry official told AFP, adding that the EU Civil Protection Mechanism had been activated.

An Italian plane has been mobilized, the European Commission said in a statement, adding to two planes deployed by Spain.

Overnight, Portugal dispatched a team of 110 specialists including firefighters, police and doctors to help bolster the island's response to the blaze, while the Azores, another Portuguese territory in the Atlantic ocean, deployed 30 men to assist.

Madeira is an autonomous region of Portugal with a population of about a quarter of a million.

The archipelago of four volcanic islands is located around 500 kilometres (300 miles) off northwest Africa in warm sub-tropical waters that have made it a popular tourist and cruise ship destination.

Mainland Portugal has also been struck by a spate of forest fires since Friday with the north of the country, where temperatures have surged to 35 degrees Celsius (95 degrees Fahrenheit), particularly hard hit.

A German man, living in Portugal for 30 years, died in a caravan fire in a central region Wednesday. Rescuers earlier said he was a victim of the forest fires but later clarified the circumstances, saying his death was not linked to the blazes

On Wednesday about half of the north was on alert for fires with the risk assessed as between "heightened" and "maximum".

More than 3,000 people have been battling to contain roughly 100 fires across the country with 12 major blazes leading to the evacuation of local residents overnight.

"The situation is difficult" but the tourists "have been understanding and we don't have any cancelled reservations", Cristina Pedra, head of the Funchal Association of Trade and Industry.