Russian swimmer Yulia Efimova of Russia in the beginning of this week's finger-waving battle at the 2016 Rio Olympics on Monday.
Credit:
Stefan Wermuth/Reuters
Share

It’s a decades-old stereotypical Olympic narrative: The Russians are the stern-faced bad guys, the “Evil Empire” — here to rob the clean-cut Americans of their rightful place atop the podium.

But these days, the concept of Russia as the villain in clean sports has gotten a shot in the arm. American and other athletes are playing along, wagging fingers at Russian drug cheats in the pool, and calling them out at news conferences.

Investigators commissioned by the World Anti-Doping Agency concluded last month that Russia has been running a government-backed sports doping system.

The saga reads like a Cold War-era Frederick Forsyth novel.

As a result of the agency's findings, more than 100 Russian Olympic athletes and the nation’s entire Paralympic squad were barred from competing in Rio. Olympics officials almost banned Russia entirely from the 2016 Summer Games. 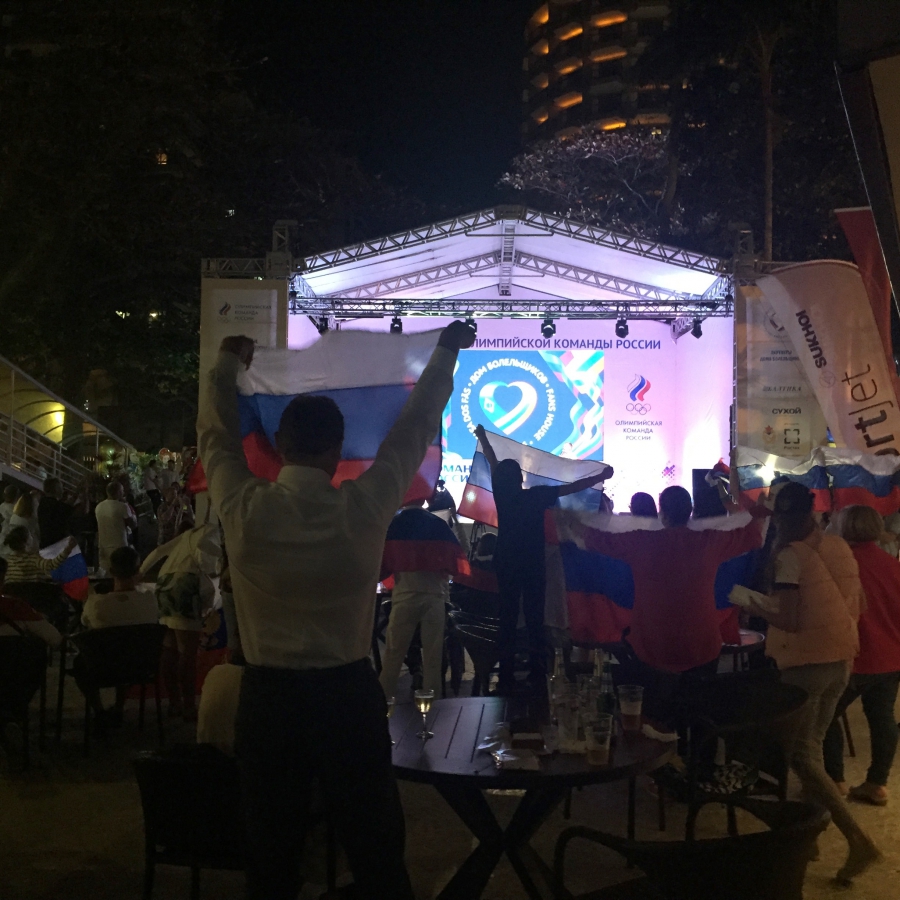 Russian fans cheer on their country's athletes in Rio.

For Russians living in Brazil or visiting Rio, however, the doping scandal is just the latest phase of longtime Russia-bashing. In interviews, more than a dozen Russians visiting the 2016 Olympic host poured scorn on the allegations, calling them a conspiracy and a lie propagated by America. Russians in Rio say they’re not letting the bad news spoil their fun, and that they’ve had a warm welcome here.

“I think the Anglo-Saxons have hated Russia for many centuries and that’s normal, that’s OK,” said Roman Taplin, referring primarily to the English and Americans. “Brazilian people say ‘Olá’ and ‘We respect Russians,’ and things like this. Brazilians are just like Russians.”

The welcome hasn’t been entirely friendly, however.

The crowd booed as Russian swimmer Yulia Efimova took her place to swim in her Olympic debut in Rio’s Aquatic Center on Sunday. Efimova, who previously served a 16-month ban for doping, was barred from Rio a few weeks ago, then quietly reinstated by the International Swimming Federation.

A 21-year-old fan named Andrey Polinov, who was in the aquatic center on Sunday, said the booing made him angry.

Interviewed at the bar in Russia House, the base for Russian fans and officials overlooking Copacabana Beach, Polinov said he would die for his country and that he supported the Russian team all the way.

But while the Russians interviewed for this story blame the US for their team’s predicament, they didn’t seem to hold a grudge. Shrugging, Polinov said the investigation into Russian athletes was pure politics. It’s a fight between nations, he said, not between individual Russians and individual Americans.

“America is my friend,” he said in English, adding in Russian through a friend who spoke English, “America is like my little brother.”

Read more: Many Russian Olympians were banned from Rio, but their country's still winning medals

One interviewee, who declined to give his name, said he walked the length of Copacabana over the weekend draped in a Russian flag. He said he was approached by people from all over the world who offered condolences and agreed with the idea that the doping investigation is a US-led conspiracy.

“And all people came to me from different countries and told me, ‘We know who is standing behind this scandal,’” the man said.

Maxim Chzhan, who has lived in Rio for three years, said he’s heard nothing but positivity. When people hear he’s from Russia, they ask him about how cold it gets in Siberia, he said, but nobody dwells on the cheating scandal.

Nevertheless, Chzhan, who grew up watching the Olympics with his dad, a gym teacher, said the recent news has cast a pall across an event he’s been looking forward to since he moved here.

“All this news lately, it’s very sad actually,” he said.