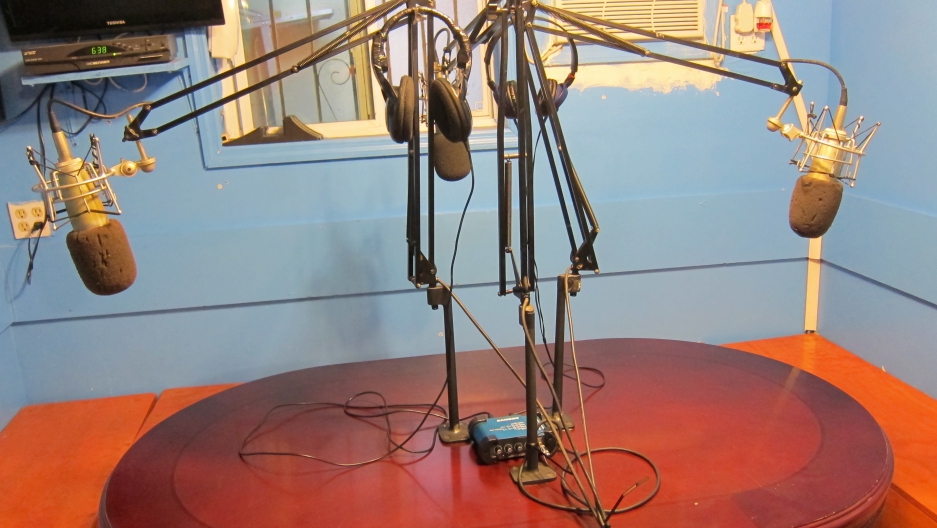 There is a stretch of Nostrand Avenue in Brooklyn that has a Haitian radio station on every block — Radio Soleil, Radyo Pa Nou, Triomphe, Omega, Independans. Some sport bright awnings like the neighboring beauty salons and take-out spots, others operate discreetly on residential side streets, but they all broadcast the sounds of Kreyòl conversations and konpa music.

Walking the neighborhood you can hear those sounds coming from cars, shops and sometimes a stereo right on the sidewalk. But as far as the Federal Communications Commission is concerned, not one of these stations has its own licensed frequency.

According to Ricot Dupuy, Haitians’ love of radio is rooted in politics:

“There is something called the ‘Transistor Revolution,’” he explains.

During the long reign of the Duvalier family (from 1957 to 1986), when all political opposition in Haiti was brutally silenced, radio was a unique space for dissent. As Dupuy remembers: “People had radios hidden, in the kitchen, in the bathroom. People would go under the bed and listen to radio programs, to listen to words of hope about one day ending this nightmare. Even though Haiti was poor, people were saving money to buy the little radio.”

Thirty years after the fall of Duvalier, radio remains the dominant form of media in Haiti, where it can cross the country’s mountainous terrain, speak directly to the significant illiterate population, and serve up the perfect mix of music, politics and religious programming. Haitian immigrants have brought that radio culture with them to the US, where they’ve encountered a system of media regulation that has few options for small-scale broadcasters.

One option is perfectly legal: the subcarrier station. Jeffery Joseph, the operations manager at Radyo Pa Nou explains how it works:

“So you have a station — let's say like 101.9 LiteFM — they broadcast throughout the Tri-State area. They sell a radio and they put a special chip in it: Wherever LiteFM goes, they are able to listen to our station too, but they need to buy the radio from us.” In Pa Nou’s front office, there are boxes of those radios for sale, each one modified to pick up their signal. These subcarrier frequencies are not regulated and require no license, but Pa Nou does have to pay a significant fee to its host station.

Another option for Haitian broadcasters is to simply set up low-power transmitters, what is sometimes called "pirate radio." This approach is not legal, and causes conflict with legal stations that compete for the same frequencies, but it has become increasingly common in big cities like New York, Miami and Boston. Down the street at Radio Independans, Jacques Dorvil lamented this situation after his Saturday afternoon program: “Nobody likes to be illegal. We just want to keep our community connected — how much they gonna ask us to pay for that?”

As all these stations — both legal and illegal — compete for listeners, advertising dollars, and space on the radio spectrum, conflict is inevitable, leading some in the community to call for a crackdown on pirate radio, and others to suggest rethinking the basic principles of American radio regulation. One thing is clear: Haitian broadcasters will continue to find a way to get on the air — with or without a license.

This story is based on an episode of Afropop Closeups, a new podcast from Afropop Worldwide, a PRI-distributed radio program that has shared stories and music from Africa and across the African diaspora for the past 27 years. In Afropop Closeups, producers are giving voice to musicians, scholars and people across the world who are responding to extreme situations including violence, war and cultural oppression. Listen on Soundcloud, or on the Afropop Worldwide podcast feed