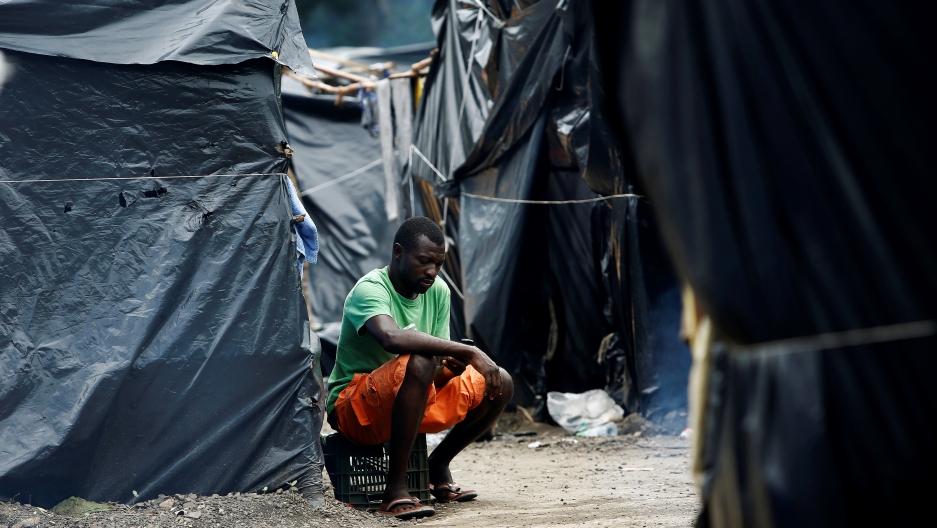 An African migrant stranded in Costa Rica sits outside his tent in a makeshift camp at the border between Costa Rica and Nicaragua, in Penas Blancas, Costa Rica on July 15 .

Share
Groups of human beings have always moved or migrated from one geographic location to another. This phenomenon continues in the 21st century and is driven by national and international wars, globalization of local and regional communities, changes in climate and other such events.

Within the first decades of the 21st century, millions of women, men and children have migrated from their homes in countries of the Middle East, Africa and Asia to locations in Europe, Scandinavia, Australia and the Americas. News media often equate these movements with the concept of a diaspora, using the term to describe almost any human group moving from their homeland to new geographic locations.

Yet, social scientists have long identified distinguishing characteristics of a diaspora, and human movement or migration is but one requirement. Misuse of such a universal term risks diminishing a collective understanding of our world. Having multiple or individualized definitions for major human universal phenomena hinders our ability to produce policies that address social problems.

So, which of our contemporary large-scale movements of humans is actually a diaspora?

While human migration is always part of a diaspora, not all migrations equal a diaspora.

In the US, our thinking about diaspora is tied to globalization because transportation and communication technologies have made human movement much easier. Economic and political factors, not to mention local, regional and national wars, have caused much of contemporary migration from countries of the Middle East. These and other causes of geographic movement are also applicable to hundreds of thousands of Africans migrating from countries of their continent.

Even international government officials speak of a Cuban diaspora, a Syrian diaspora, Tibetan diaspora, Canadian diaspora and others. In the context of human mobility, the United Nations estimated that in 2015, as many as 244 million persons lived away from their lands of origin.

The case of African descendants

Historical realities in other parts of the globe may have a different experience with the diaspora concept. In the Western world, the idea comes from Christian biblical references to Jewish forced migration. The biblical text also references an African diaspora.

In 1962, United Nation’s agency UNESCO convened a First Congress of African Historians. Participating scholars provocatively reminded the agency that our modern world could not be celebrated without first understanding contributions of the African diaspora. The gathering introduced serious perspective to the unexplored reality of the global disbursement of Africans and their descendants and brought the African diaspora term into the academic vocabulary. As a global phenomenon, the African diaspora began in the 1300s as Arabs captured and sold enslaved sub-Saharan humans from a variety of kingdoms to locations east of the African continent. Based on labor needs in the newly contacted Americas, Europeans entered this global trade of human beings. From the 1400s through the 1900s, massive numbers of African descendant men, women and children were forced and semiforced into migration patterns away from their homelands. They were forcibly taken and sent to places west and east of Africa.

A primary characteristic of a diaspora is massive numbers — multiple millions — of group members being forced to leave homelands for new geographic locations. For the African diaspora, this massive forced migration was sustained for more than 500 years. Some authors have even projected the African diaspora to include 50 to 100 million Africans and their descendants. Significant to the world’s history, the multiple millions of humans in the African diaspora was a bedrock foundation of Western Europeans’ construction of social and physical infrastructures that produced the modernity of the 21st century.

An additional characteristic of a diaspora is its members’ continuing myths and realities of homeland relations. This includes the ongoing creation of a group identity and communities of consciousness. Each of these two characteristics — massive forced migration and mythology — is applicable to the African diaspora. We must wait to see if contemporary Syrian migrations, and others will possess these characteristics.

A diaspora is thirdly distinguished by host societies erecting structural, long-term barriers to the group and its descendants’ social integration and upward mobility.

The more than 500-year exclusion of members of the African diaspora from social assimilation has been caused by structural barriers that joined racial discrimination with discrimination of the poor, overly represented among African descendants. This is particularly true in the Americas, where societal statistics have included African-Americans as part of most nations, but the lives of these citizens of African descendant continue to reflect structural dispossession unlike most other migrating populations.

Perhaps contemporary Western societies’ misuse of the term “diaspora” to describe any national groups’ geographic migration is changing the meaning of the word. Or, maybe we haven’t done a good job of educating our citizens about distinctions of important universal concepts. Or, maybe we need a new term for many of today’s populations forced to migrate from their homelands. This will be exceptionally true if, unlike groups in the African diaspora, new groups of migrants are socially included in their new locations.