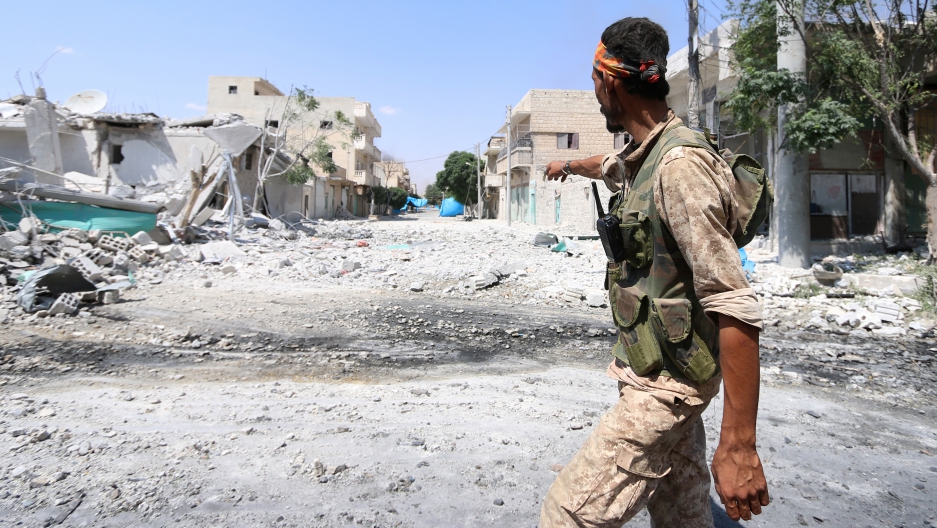 A Syria Democratic Forces (SDF) fighter points towards blue sheets spread over streets as a cover from snipers as he walks on the rubble of damaged buildings in Manbij, in Aleppo Governorate, Syria, August 7, 2016.

Syrian regime forces and rebel factions sent hundreds of reinforcements to Aleppo on Monday as both sides braced for a crucial battle to control the country's second city.

Fighting for Syria's former economic powerhouse is intensifying after an opposition advance at the weekend broke through a three-week government siege of the city's rebel-held east, dealing a major setback to regime troops.

Rebel forces on Sunday announced a bid to capture all of Aleppo city, which if successful would mark the biggest opposition victory yet in Syria's five-year civil war.

But forces loyal to President Bashar al-Assad are putting up a fierce fight and have begun pouring in reinforcements.

The main opposition coalition said Monday it was only a matter of time before rebels take all of Aleppo, but the United States warned there would be no quick victory.

The Syrian Observatory for Human Rights, a monitoring group, said some 2,000 pro-regime fighters from Syria, Iraq, Iran and Lebanese Shiite movement Hezbollah had arrived in Aleppo since late Sunday.

"Both sides are amassing their fighters in preparation for the great battle of Aleppo," said Rami Abdel Rahman, the head of the Britain-based Observatory.

The Monday edition of Al-Watan, a Syrian daily close to the government, reported that the army had received "the necessary military reinforcements to launch the battle to retake the areas from which it withdrew."

It said a military operation by Syria's armed forces was "imminent ... and inevitable."

Aleppo has been roughly divided between government forces in the west and rebel groups in the east since fighting first broke out there in mid-2012. 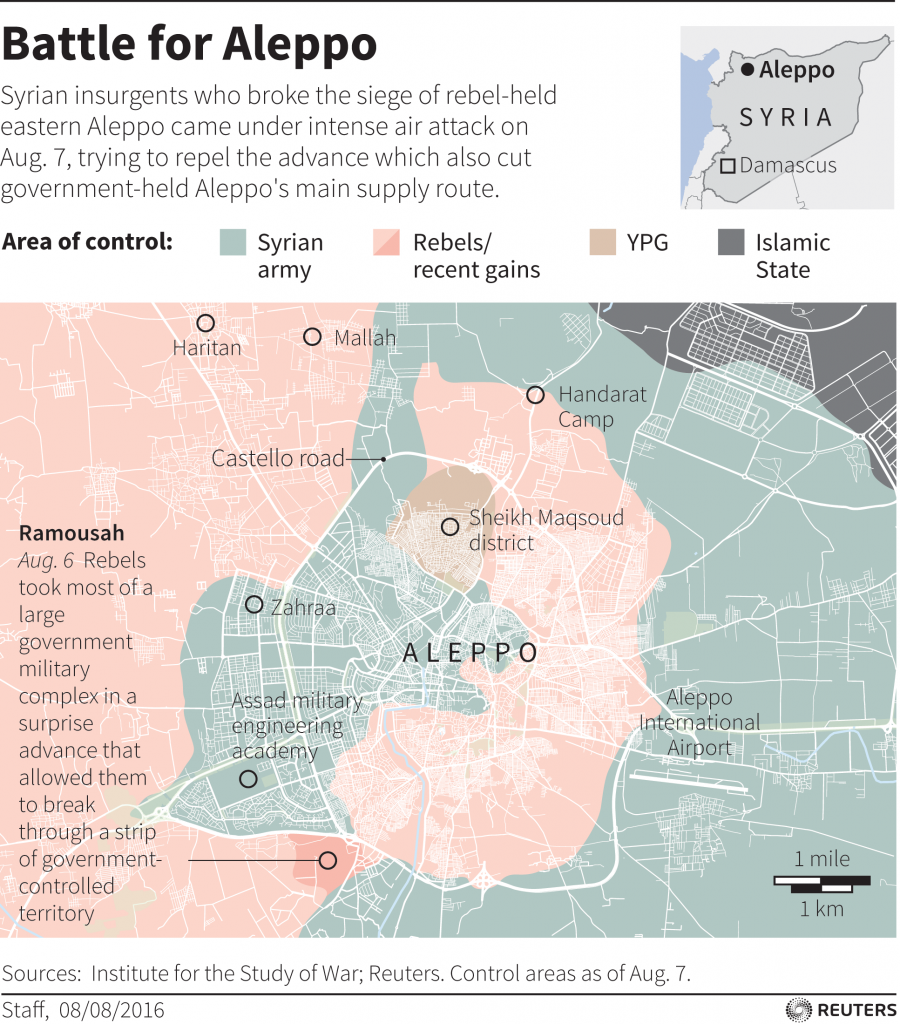 An AFP correspondent in the eastern districts said shelling and sporadic clashes were hitting Aleppo but there were no signs yet of significant new offensives.

After years of stalemate, fighting for the city entered a new phase last month when government forces took control of the last supply road into rebel-held areas, leaving some 250,000 people in eastern districts surrounded.

In a desperate bid to break the siege, a coalition of rebels, Islamists and jihadists overran a series of buildings in a military academy on the southwestern edges of Aleppo on Saturday before linking up with rebel groups inside the city.

Emboldened by the victory, the fighters — largely grouped under the banner of the Army of Conquest — set their sights on recapturing all of Aleppo.

In a statement Sunday the Army of Conquest announced "the start of a new phase to liberate all of Aleppo," pledging to "double the number of fighters for this next battle." 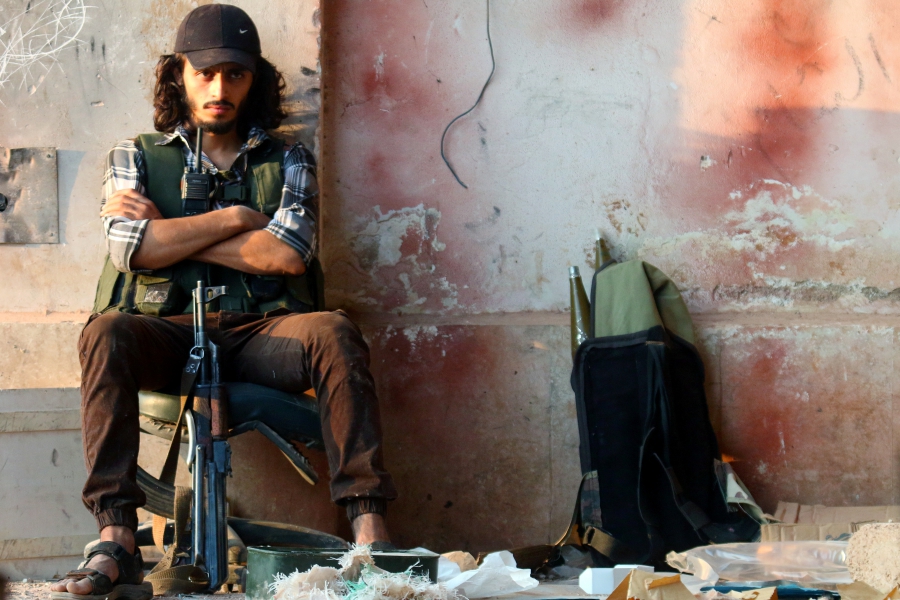 A rebel fighter sits with his weapon in the artillery academy of Aleppo, Syria, August 6, 2016.

In Istanbul, Syrian National Coalition chief Anas al-Abdeh told AFP he was confident the whole city could now be taken.

"I think it is just a matter of time. It will happen," he said.

"We see very clearly the regime forces are not able to resist."

Washington's UN envoy Samantha Power told the Security Council: "Despite the overwhelming force of the Assad regime, Russian, Iran and Hezbollah on one side, neither side will be able to win a swift or decisive victory in the battle for Aleppo."

Abdel Rahman told AFP that hundreds of opposition fighters had arrived in Aleppo from the surrounding province and neighboring Idlib.

Most were from the Fateh al-Sham Front, formerly Al-Qaeda affiliate Al-Nusra Front, that leads the Army of Conquest.

"Whoever wins (in Aleppo), the war will not end. It is however an important battle, the result of which will set the course of the conflict," said Thomas Pierret, a Syria expert at the University of Edinburgh.

Pierret said a rebel win would confine the regime to an arc of territory between the western coastal areas and the Golan Heights, while a regime victory could lead to the "collapse" of the insurgency.

The rebel advance at the weekend cut off a key regime access route on the city's southern edges, previously used to bring in supplies for the estimated 1.2 million residents of western districts.

Overnight, regime forces brought in dozens of trucks carrying food and fuel into western neighbourhoods via the northern Castello Road, the Observatory said.

"This is the new route that the regime forces are securing as a temporary alternative to the route they previously depended on," Abdel Rahman said.

More than 290,000 people have been killed since Syria's conflict erupted in March 2011, the Observatory said in a new toll on Monday.

The deaths included more than 84,000 civilians.

International efforts to resolve the conflict have repeatedly failed, although the UN is hoping that peace talks can resume later this month.