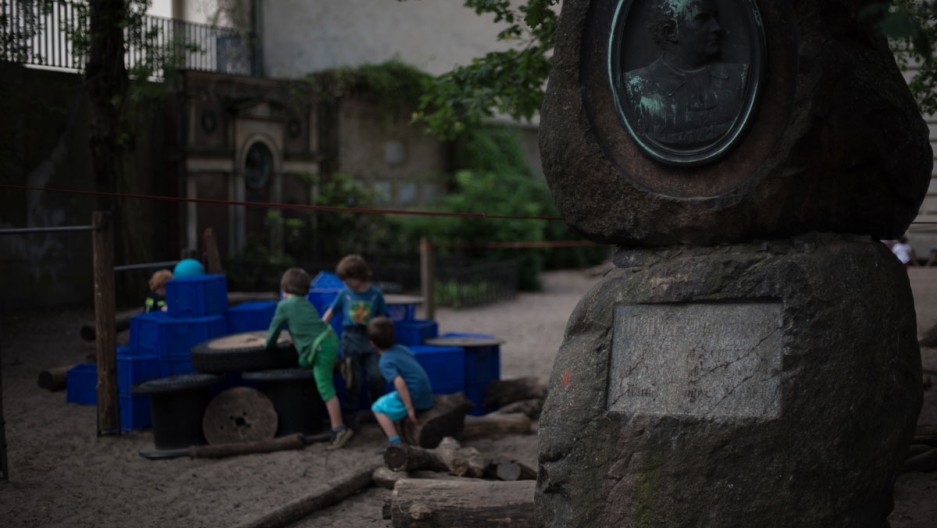 Graveyards are disappearing in the German capital.

They are being converted into public parks, playgrounds, and even land for new housing. To some, it might sound macabre, but in Germany, it reflects unique attitudes about death.

At one kindergarten playground in central Berlin, for instance, kids chase each other on bikes, run around with balloons, and climb on top of tombstones. The playground is built on an old graveyard belonging to the Sophien Church.

“This hasn’t been used as a cemetery for much more than 100 years,” pastor Christine Schlund explained.

A few steps away from an unmarked tombstone in the middle of a sandbox, another grave is fenced off: the final resting place of the esteemed historian Leopold von Ranke, considered the father of modern historical scholarship.

One can only wonder what this esteemed historian might think about his place in contemporary history — next to a sandbox.

“People tend to be angry — surprised and angry — at having this grave in the middle of the kindergarten,” said Schlund. She said there are those “who think it is strange children are playing on the former graveyard.”

“I think it’s absolutely no problem,” she said, noting that the space hadn’t been used for new burials in many decades.

“Christian faith is about life,” she said. “I think by having children playing on the cemetery, the dead are honored in a special way.”

Burials have gone out of fashion in Berlin.

A few hundred years ago, as space started getting tight, cemeteries started charging rental fees. Many people are now choosing cremation instead.

Some pay to be buried in a forest cemetery outside Berlin. The urn is buried at the foot of a tree, and a small plaque with the name of the deceased is nailed to the trunk.

Jurgen Quandt, the soft-spoken head of a Protestant association that oversees many of Berlin’s cemeteries, predicts only a quarter of the land in his cemeteries will be used for burials in upcoming decades.

“We have to reflect what will we do with all these cemeteries, which are not longer needed for burials,” he said.

Graveyard recycling is not a new practice in Berlin. The kindergarten playground was built atop the cemetery in the 1950s, and in the 1970s, a Christian cemetery in the city was converted into a Muslim cemetery to accommodate an influx of Turks.

But as the city expands, cemeteries have become prime real estate. For Quandt’s cemetery association, it’s a money issue: The association can’t afford to maintain cemeteries when fewer people are paying for plots.

“We have no other choice,” he said.

One of the association’s cemeteries is being converted into a park. Another has been partially converted into a cemetery for lesbians. Two graveyards have been appropriated for new housing for refugees and migrants — some of the million-plus people who fled the Middle East and moved to Germany in the last few years.

Then there’s the Berlin graveyard, mostly cleared of headstones, that is now a community garden, including a small Syrian refugee garden with tomatoes, onions and mint.

The old tombstone carver’s workshop at the entrance to the graveyard now hosts German language classes for refugees.

“It’s a space that’s been abandoned, and used for burying people, used for, now, gardening and cultivating human beings in the best way possible,” said Fetewei Tarekegn, the head gardener of the community project.

He said the project sends a message to refugee gardeners: “To show them, you know, you’re refugees but you are not second-class citizens. You’re not a nobody.”

On the edge of the Syrian community garden, one lone tombstone remains, engraved with the name of Marta Krauss, who died in 1933. Underneath her name, a motto in German reads: “unforgettable.”

On the other hand, Quandt of the cemetery association says it is painful to watch a cemetery vanish.

There is one exception to the disappearing cemeteries of Berlin. No one touches the stately graves of famous historical figures, like Leopold von Ronke’s grave in the playground.

Not a famous historical figure yourself? No problem.

For a couple thousand euros, the cemetery association will bury you in the grave of a famous historical figure of your choice, from a catalogue of options.

You’ll share a grave with a person so important, chances are you, too, will be able to rest in peace.