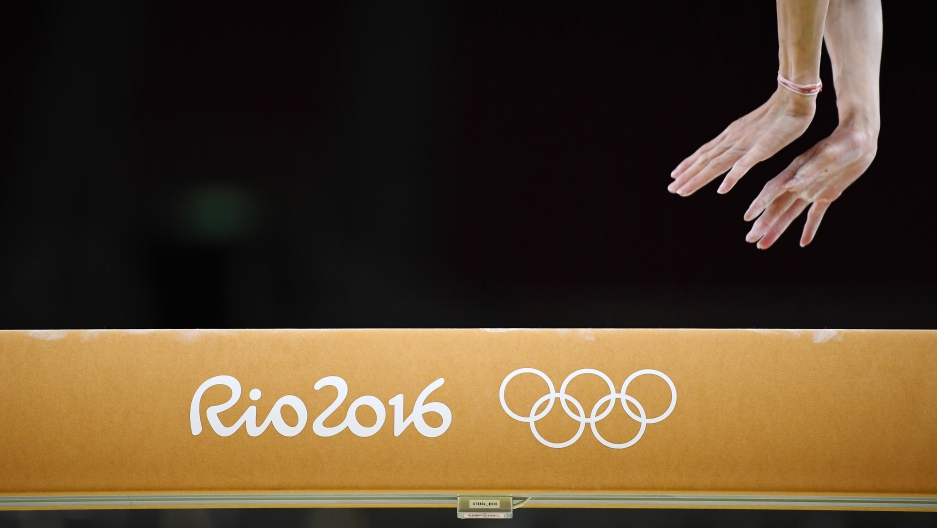 A close up of the hands of a member of China's women's gymnastics team training on the balance beam in Rio ahead of the 2016 Olympics.

Absent from the Olympics starting this week are the top athletes who opted out of the Rio Games, citing concerns about the Zika virus.

The virus has been linked to the serious birth defect known as microcephaly.

Transmission rates of the virus have slowed in Brazil, but US health officials warn the virus still poses a risk to pregnant women.

“Pregnant women should not go to Brazil now,” said Dr. Anthony Fauci of the National Institutes of Health. “That is clear.”

Fauci, director of the National Institute of Allergy and Infectious Diseases at the NIH, stopped short of saying other visitors should avoid Brazil.

Researchers are still working to understand exactly how Zika can cause birth defects, but the causal relationship is clear, Fauci said.

“There have been a number of studies showing the direct link there, and more and more information that accrues confirms that link,” Fauci said. “So I think that’s something that really we need to take off the table now.”

It’s still not known exactly how many pregnant women who are infected with Zika will have a baby with birth defects.

One Brazilian study Fauci cited in an interview with The World found that between 1 and 13 percent of women in the study who were infected with Zika during the first trimester gave birth to a baby with microcephaly.

“It is very likely that the percentage of women having some fetal abnormalities that might be more subtle than the very obvious microcephaly is going to be a percentage that’s somewhat higher,” said Fauci.

The NIH recently launched a study that will follow 10,000 women in South America throughout their pregnancies to get a more complete picture of rates of microcephaly and other birth defects.

Meanwhile, Zika transmission in Brazil is significantly down from levels in January and February. It’s winter in Brazil, so there are fewer mosquitoes around to transmit Zika. And the virus is no longer being exposed to an entirely novel population.

“A substantial proportion of the population has already gotten infected, so the ability to spread has toned down,” Fauci said.

In Brazil, Zika is present in large swaths of the country, but high rates of reported microcephaly are in just a few states in the northeast.

That has some Brazilian health officials wondering whether Zika alone is causing microcephaly, or whether Zika and some other yet-to-be-determined factors combine to raise the risk of birth defects.

Fauci said it is possible that underlying factors like the economic conditions, health and prenatal care of the mother may have some influence on whether her baby is born with microcephaly.

“But as I said, the primary cause of microcephaly is the virus infecting a woman during her pregnancy,” Fauci said.

Zika was first thought to be transmitted by just one kind of mosquito, the Aedes agypti, but has been confirmed in a second mosquito that has a much bigger range in the US, the Aedes albopictus. If or how effectively this mosquito transmits Zika to humans is not yet known.