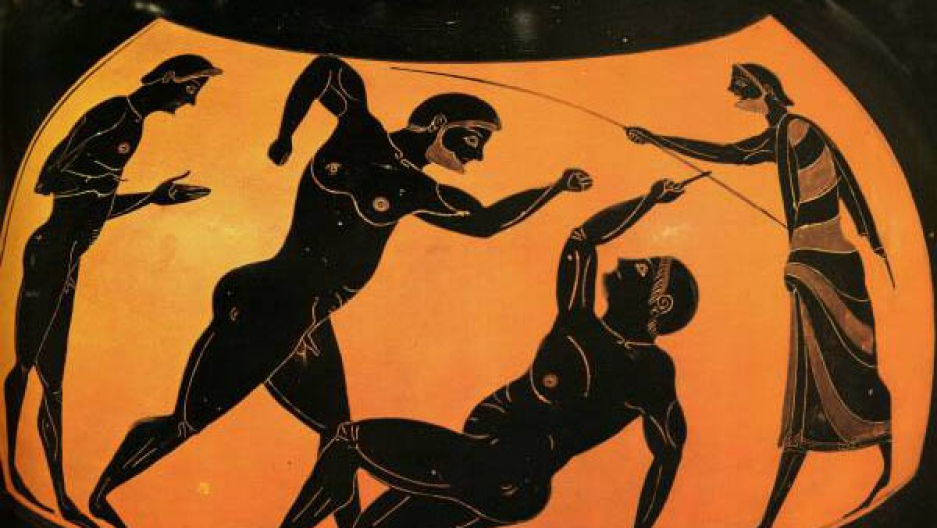 A Greek urn from about 530 BC showing a mixed martial arts contest, the "pankration." The athlete on the right has raised his index finger as a sign of submission.

But according to historian David Clay Large, that might better describe the scene at the original Olympics in ancient Greece.

Large teaches at the University of California at Berkeley, and has authored several books on the Olympics. He wrote a story for Foreign Policy, "Everything Bad About the Rio Olympics Was Much Worse in Ancient Greece," laying out what things were like at the earliest games.

Take the issue of security. There are fears of muggers and terrorists in Rio, but in a conversation with The World, Large says that was a given in the old days. “The world of the ancient Olympics was so embroiled in constant fighting back and forth between rival city-states that every time the Olympics took place there was fear of some kind of attack, some kind of disruption,” he says.

The Greeks established a truce for each Olympics. This did not stop any wars that might be taking place, but it did prohibit any attacks on the sacred venue, and outlawed attacks on fans and players going to and from the Olympiad.

“The fact is that even this Olympic truce often broke down,” says Large. “Famously in 364 BC when soldiers from the city of Elis actually invaded the Olympics grounds in order to retrieve protection rights over the games, that had been taken away from them in the years before. So there was a bloody battle going on right during the wrestling competition.”

“The Spartans were also a problem,” adds Large. “They had been banned from the Olympics for many years. They themselves thought the Olympics, in any event, were not bloody enough for their taste. But they did show up in the 420s and they got themselves banned once again for extra-curricular fighting.”

The other strike against the Spartans may have been their odor, since their warrior creed prohibited them from bathing, which Large says the other ancient Greeks took very seriously.

The ancient Greeks staged games every four years, for over a thousand years, on the field of Olympia, in the southern part of modern Greece.

The ancient Olympics were finally abolished as being un-Christian in 393 AD.

Rio is also battling problems with polluted water and backed-up toilets in the Olympic village. The ancient Greeks also had to wrestle with huge sanitary issues.

Large points out that obviously they did not have the benefit of modern sewage systems, nor even running water, since the games were held at the height of summer which is notoriously dry in the Mediterranean.

“What they did is they built these trench-like latrines for the visitors, who came in their thousands,” says Large. “These latrines were extremely unsanitary, to put it mildly. They attracted all kinds of bugs and flies. There were outbreaks of various kinds of gastro-intestinal diseases, diarrhea. Often fatal.”

Sacrifices to the gods before every games to avert the flies did not help, Large adds.

The lack of water and the high heat also caused a lot of deaths from heat-stroke.

“The issues surrounding Rio today are nothing compared to those of ancient Greece,” says Large, “when it comes to matters of pollution and hygiene.”

The competitions themselves were also subject to cheating, bribery and what we would now call doping. Competitors stood to win fame, glory and wealth, and the city-states that they represented also saw the contest as a key way to score one over their rivals.

One thing that you don’t hear much about in the modern OIympics, though, is the use of black magic, which was quite common among their ancient predecessors.

“It’s often assumed somehow these ancient Games were purer than the modern ones,” Large concludes. “In fact, if anything they were even more corrupt, perhaps.”