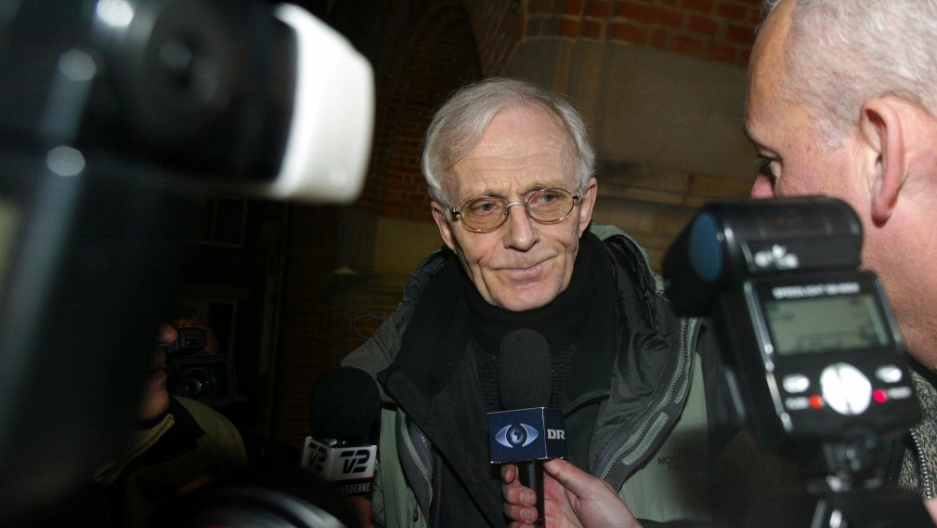 Mogens Amdi Petersen, shown in 2003, is the founder of a secretive organization called the Teachers Group, which former members, academics and the Danish media have likened to a cult. He's also an international fugitive wanted in Denmark for embezzlement and tax evasion.

UNICEF has cut its ties with an organization that coordinates US humanitarian programs in Malawi, following an investigation by Reveal from The Center for Investigative Reporting showing that the group diverted money intended to alleviate hunger and disease.

DAPP Malawi had received $920,000 over the past three years from UNICEF — the United Nations Children's Fund. A spokeswoman said UNICEF ended that relationship by halting funding to the project June 30. By July, UNICEF was conducting a deeper audit of the DAPP programs to determine whether funds were misused.

"The information in the pieces you put out was useful to us, and when we did our most recent spot check, we had a clear picture of what we wanted to look at," said UNICEF Malawi spokeswoman Angela Travis. "We want to make sure there are no benefits, there are no funds going to the organization."

The UNICEF funding came on top of $45 million in funding that the U.S. Department of Agriculture's Foreign Agricultural Service has allocated for DAPP Malawi projects since 2006. That's about one-third of the USDA money routed to DAPP's U.S.-based sister organization Planet Aid, which also raised funds for a DAPP affiliate in Mozambique.

At one farming project in Malawi held up by the organization as a success, Reveal found little evidence the money had reached its intended destination.

In June, a UNICEF representative traveled to Malawi from South Africa to visit a DAPP sanitation project. Patsy Nakell was accompanied by BBC journalists working in partnership with Reveal and Christopher Banda, a DAPP employee.

Banda managed the UNICEF-funded sanitation program meant to provide toilets, washbasins, clotheslines and dish racks and to teach cleanliness aimed at preventing the spread of diarrhea, dysentery and cholera.

DAPP had reported to UNICEF that it had completed the sanitation project in Gilioti village in southern Malawi. But Banda showed Nakell a different story: A supposedly successful project had slipped.

What was supposed to have been a covered latrine was actually a damp, uncovered hole with a few cornstalks propped beside it for privacy. Multiple households shared similar crude toilets, which meant residents often defecated outdoors. A pathway was strewn with human feces surrounded by swarms of flies.

"It tells me that the village has never changed; it is still in the old situation," Banda said. "There has not been any sanitation message."

UNICEF had other concerns as well. On May 30, a group of DAPP Malawi workers had written a five-page letter to UNICEF and Malawi newspapers outlining a pattern of exploitation and fraud.

They wrote that money from project budgets did not reach the field. Employees said they had been asked to sign contracts pledging to return portions of their UNICEF-funded salaries to their employers. They also said that by coming forward, they feared "we may either (lose) our jobs some of us may even (lose) our lives."

Accompanying the letter was an example of a contract they said DAPP project managers were compelled to sign, pledging a portion of their salaries to the Teachers Group, an organization that has been likened to a cult. Previously, Reveal had spoken with more than a dozen current and former DAPP employees who said they were forced to deposit wages into a bank account controlled by Teachers Group overseers.

"They take advantage of employment opportunity scarcity, (and) for this reason we choose to remain silent and keep on suffering inwardly and just watch even when things at the project are not OK," the letter said. "Please help us."

Banda added in an interview: "To keep my employment, I had to join the Teachers Group. Since 2009, since a year after I joined, I have been contributing. It is not by free will."

Nakell, the UNICEF representative, was appalled by the filthy village scene, as well as by the allegations that UNICEF funds meant to pay African staff were diverted.

"I've never seen any such thing in my life before, and I don't understand the logic behind this, and it just is bizarre," she said.

In a July 27 letter to the BBC, a London law firm representing DAPP denied that employees had been coerced into returning pay to their employer.

"As far as DAPP Malawi is concerned, this is a private matter for them as individuals — just as membership of or donations to churches or other benevolent causes are a matter for the individuals — and has nothing to do with donors," the letter from Discreet Law said.

The secretive Teachers Group is widely regarded as a cult, led by Danish fugitive Mogens Amdi Petersen, who since 2013 has been listed by Interpol for fleeing charges of embezzlement and tax evasion. Petersen's followers run a network of humanitarian aid groups, businesses and an offshore financial network that Danish police say was set up to hide assets intended for charity.

Discreet Law defended Petersen's reputation, however, pointing out that the Teachers Group founder and leader had been acquitted of Danish fraud and tax evasion charges.

The firm did not mention that in 2006, Danish prosecutors appealed the verdicts freeing Petersen and several of his top associates. Petersen and four of the defendants disappeared around the same time. Three years later, the one defendant remaining in Denmark, Poul Jørgensen, was sentenced to two and a half years in prison on fraud charges. In 2013, Petersen and his fellow fugitives were sentenced in absentia on fraud and embezzlement charges, and Interpol issued an alert for them.

DAPP's attorneys sought to distance DAPP Malawi from Petersen and the Teachers Group fraud case, writing that "neither DAPP Malawi nor any of its present or former board members had an involvement in the Danish court case. Mr. Petersen has never held any position in DAPP Malawi."

However, Maria Darsbo — whom Malawian public records show serving as a DAPP Malawi trustee as well as its secretary — is described in the case against Petersen as having helped carry out a transaction that prosecutors said was meant to skim money from an African anti-AIDS project for Petersen's personal use.

Seven current and former DAPP managers told Reveal that they were flown to Petersen's hideout in Mexico to meet the Teachers Group leader and receive instructions from him on how to run DAPP programs. Chiku Malabwe, DAPP Malawi's former chief purchasing agent, was among them. 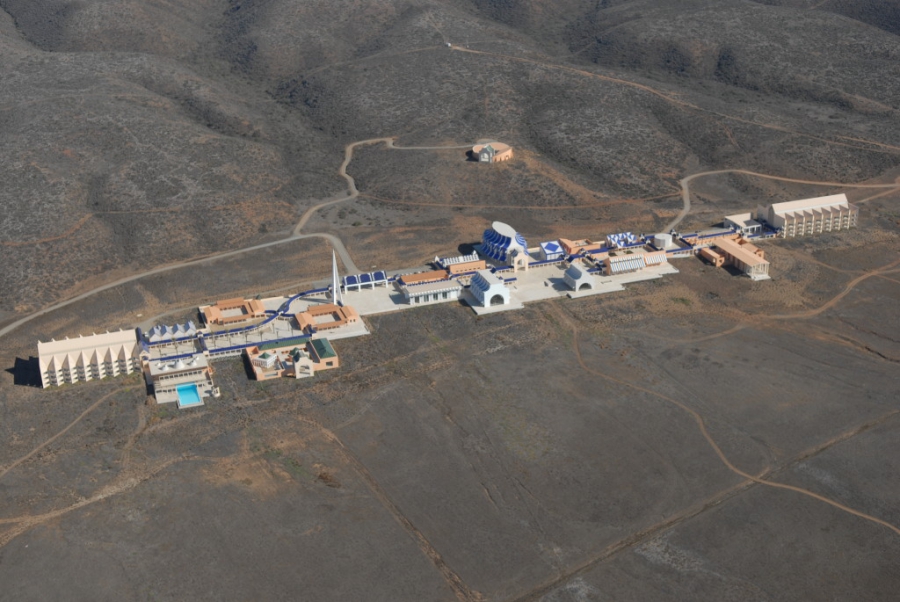 The Teachers Group’s complex in Mexico is a sprawling, marble-floored combination of Disney World, Club Med and the Taj Mahal. In 2012, the organization released documents suggesting it valued the compound at about $26 million.

The Teachers Group's complex in Mexico is a sprawling, marble-floored combination of Disney World, Club Med and the Taj Mahal. In 2012, the organization released documents suggesting it valued the compound at about $26 million.Credit: Courtesy of Enrique Botello

"Amdi Petersen, he controls everything. Whatever they do, they do it for Teachers Group, and Petersen controls it," Malabwe told Reveal. "If they say there's no connection, it would be, like — that's a total lie. There's a big connection: DAPP means Teachers Group."

In a 2001 FBI document related to extraditing Petersen from the U.S., DAPP, Planet Aid and a third group — Humana People to People — all are described as being part of the Teachers Group network, which diverts funds with "little or no money going to the charities."

Reveal previously reported that the USDA's Foreign Agricultural Service has allocated more than $133 million to Planet Aid since 2004 for aid work in Malawi and Mozambique.

In the spring, as part of its scheduled review of how its funds were used, UNICEF asked to see DAPP payroll records.

"We requested them, and they haven't been produced, despite the fact we warned them of this investigation some weeks ago," said Travis, the UNICEF Malawi spokeswoman. "Any organization would report payments to whom and when, and that would be in your payroll statement. Any organization should be able to produce that fairly quickly."

The USDA has not responded to repeated requests for comment about UNICEF's decision to halt funding. The agency's inspector general confirmed that it is aware of Reveal's findings and still is considering the USDA's request that it audit the Planet Aid/DAPP grants.

Within hours of the BBC story's publication, the British government suspended all DAPP funding pending an investigation. Since 2012, the U.K.'s Department for International Development has given DAPP Malawi $7.5 million.

That consultant, Andrew Rice, issued a denial similar to that of DAPP's London law firm.

"Planet Aid has no knowledge of the situation you describe between UNICEF and DAPP Malawi nor is Planet Aid involved in any way," Rice wrote in an email. "It would be inappropriate to give you an interview about something Planet Aid knows nothing about and is not party to."

Yet records show such connections abound.

Both Planet Aid and DAPP Malawi are listed on the USDA agreements from 2006 and 2009 that allocated $45 million for work in Malawi. Lichtenberg and DAPP Malawi Country Director Lisbeth Thomsen both are identified as "applicants" for those funds.

Documents obtained by Reveal — including Lichtenberg's personal calendars, emails and memos — show her working with DAPP Malawi leaders to obtain funding, manage relationships with donors and coordinate with the Teachers Group.

UNICEF was among their funding targets.

Lichtenberg's personal calendars from 2000 to 2013 show her meeting on a regular basis with UNICEF officials. And a Feb. 17, 2011, memo titled, "UNICEF Overview," obtained from Lichtenberg's personal files, describes UNICEF funding for sanitation projects in Malawi. Lichtenberg's files show the relationship extended beyond that country as well, noting UNICEF funds were raised for other DAPP programs in Zambia, Congo, Namibia, Angola, India and Guinea-Bissau.