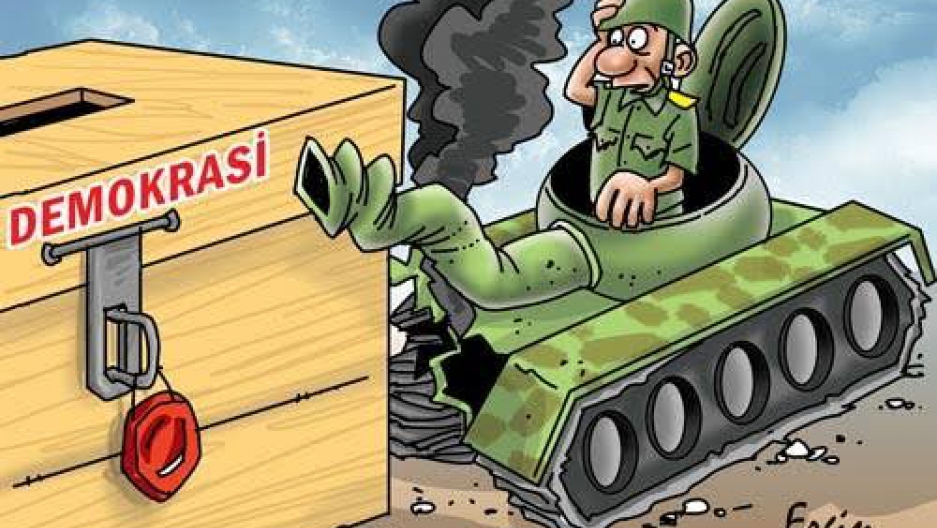 Turkey's military has staged several coups over the years but this time, despite its might, it failed.

Turkey is still reverberating from the failed coup attempt on July 15. For President Recep Tayyip Erdogan, it means a government purge of thousands or people and the detention of thousands more. It also means a crackdown on the press, including  Turkey's lively satirical press.

"Political satire is maybe the most radical outlet for criticism of the government, " says Jonathan Guyer of the Institute of Current World Affairs. He recently spent a month in Istanbul researching the city's comic and cartoon scene and happened to leave just two days before the coup attempt.

"This is one of the funniest societies when it comes to political cartoons and comics," says Guyer. "Turkey has one of the most advanced comic scenes in the world, probably the third largest after Japan and the United States. It has a half-dozen weekly comic magazines, plus political cartoons are just huge in the daily newspapers, online, Facebook, Twitter."

Just after the coup attempt, one of Turkey's most famous comic weeklies, LeMan, published a "special coup edition." The cover showed the Turkish military gambling with soldiers and Erdogan responds: "I'll see you and raise you 50 percent," a reference to his perceived support base and, the cover implies, what doomed the coup.

"It was a really funny cover." says Guyer, who has written about LeMan and its testy relationship with Erdogan and censorship. "It was actually banned quite quickly. Police went door to door to shops confiscating it because it suggested a kind of bigger scheme or conspiracy." 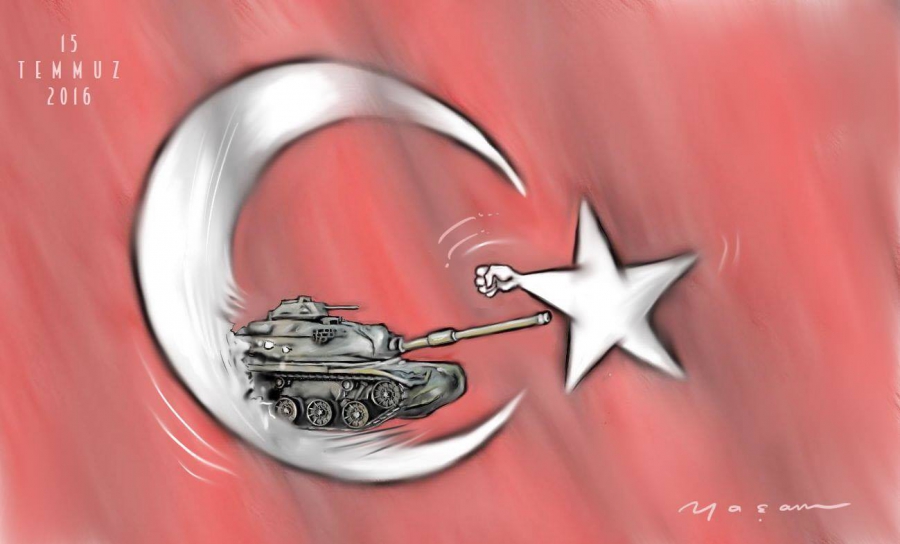 Since Turkey became a republic in 1923, there have been repeated coups by the military. This time people took to the streets (at the request of President Erdogan) and prevented the coup from succeeding.

After the special coup edition, a band of thugs tried to break into the offices of LeMan. "Luckily police turned them away, but these comic artists definitely feel under threat today in Turkey "

Guyer spoke to a number of cartoonists during his month in Istanbul. "Every cartoonist I interviewed in Turkey told me that 2016, irrespective of the recent coup and crackdown, has been the most difficult year for cartoonists on record." Guyer says about 1,500 people, including cartoonists, celebrities and journalists, are under investigation for insulting the president. 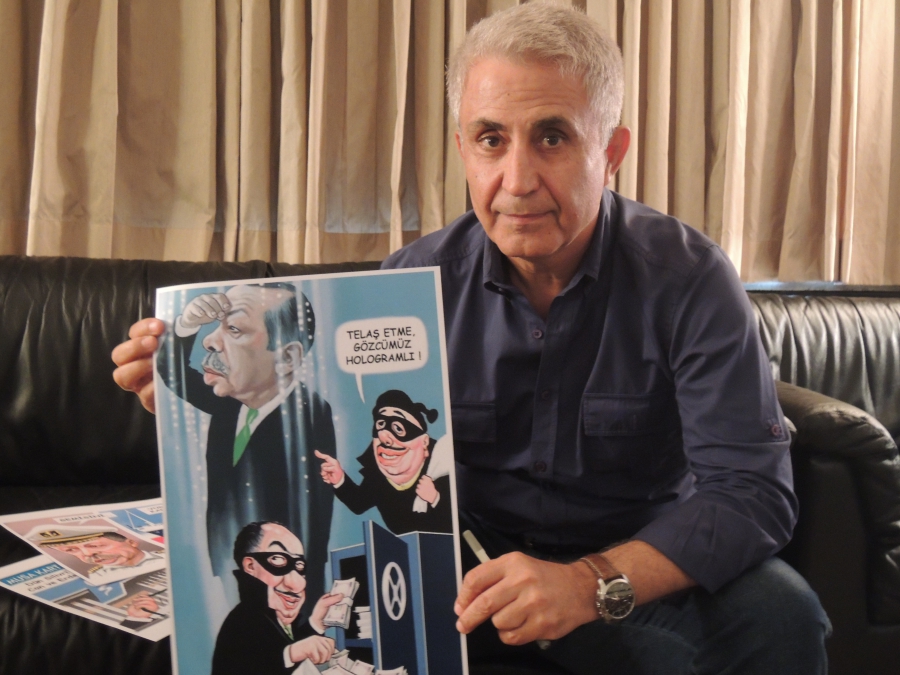 Photo of Turkish cartoonist Musa Kart holding a cartoon that prompted a law suit from President Erdogan who charged the cartoonist with insult and slander. The cartoon depicted the Turkish president as a hologram keeping a watchful eye over a robbery. Kart could have faced 9 years behind bars but an international campaign of solidarity from other cartoonists helped win his aquittal.

"The legal assault on cartoonists in Turkey has really been unprecedented over the past few years under Erdogan." One cartoonist, Musa Kart, was sued by Erdogan for a 2004 drawing that portrayed the Turkish president as a kitten and for another cartoon that portrayed him as a bank robber. "[Kart] told me that's there's no serious journalist or cartoonist who doesn't who doesn't have a case against him or her in the country." 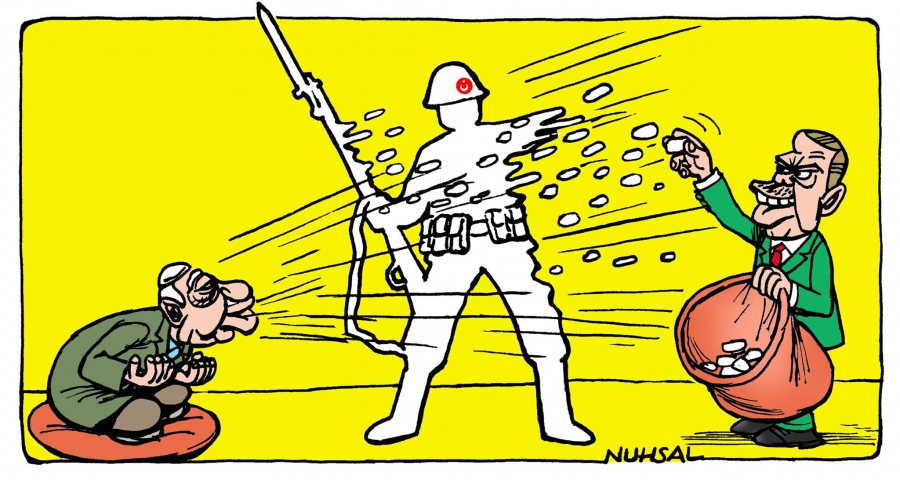 Muslim cleric Fethullah Gulen (left) may have influenced Turkey's military to attempt a coup, but President Erdogan (right) is using that suspicion to round up everyone associated with the US-based Turkish politician.

Erdogan has even gone after non-Turkish satirists. In April, Erdogan demanded that Germany prosecute a well-known satirist, Jan Boehmerman, for reading an obscene poem about the Turkish president. In a controversial move, German Chancellor Angela Merkel obliged.

But Turkey's political cartoonists do not appear to be cowed by government threats. "Literally from the day after the coup, cartoonists in Turkey have been hitting quite hard against their president," Guyer said.

The cartoonists Guyer spoke to told him that they have experience with coups, especially the one in 1980. After that coup, LeMan's editor Tuncay Akgün was on the run for 10 years before resurfacing in 1991 to start his current satirical magazine. Other publications were shut down. "So as frightening as it might seem for us as observers in America and Europe, in Turkey this is kind of what comes with the job for illustrators and satirists."

Guyer says attempts by the Turkish government to shut down satire have failed. "The cartoonists are not softening their radical message. They're acting as ombudsmen and holding the government to account." 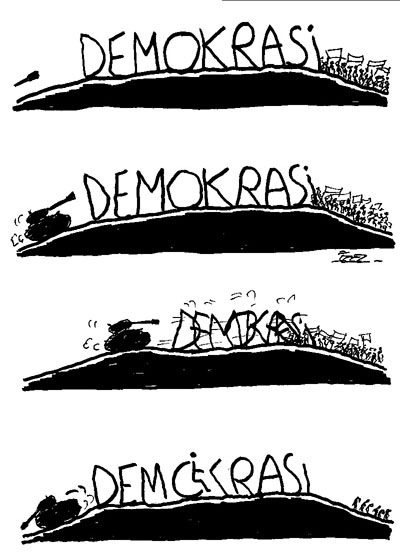 The Turkish military attempted a coup, the people fought back, and democracy was restored, but it's not the same.