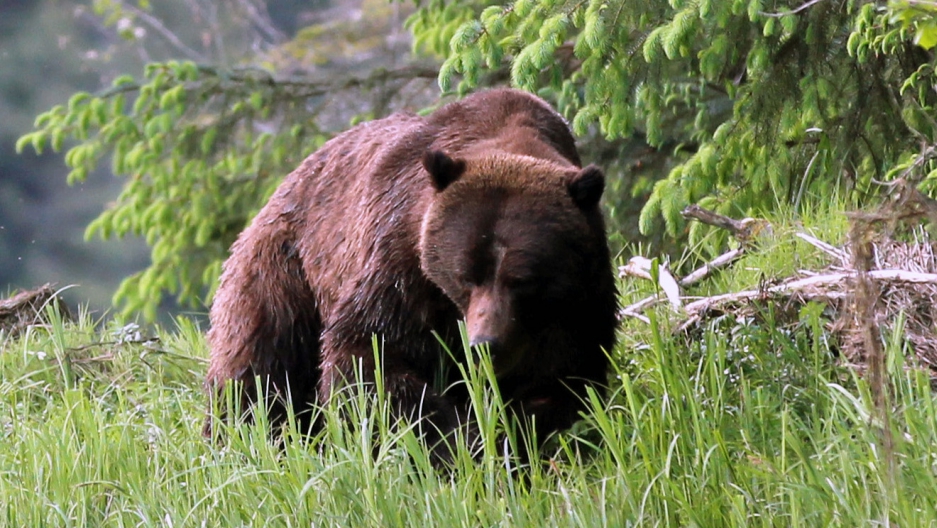 The small outboard boat I'm in is floating along the estuary of the Nekite River.

It's a cloudless morning and just beyond the bow there's rustling of trees and the sound of branches snapping.

I'm holding my microphone as far out as I can — so that I can record the sound of a male grizzly, on the shore about 15 yards away. 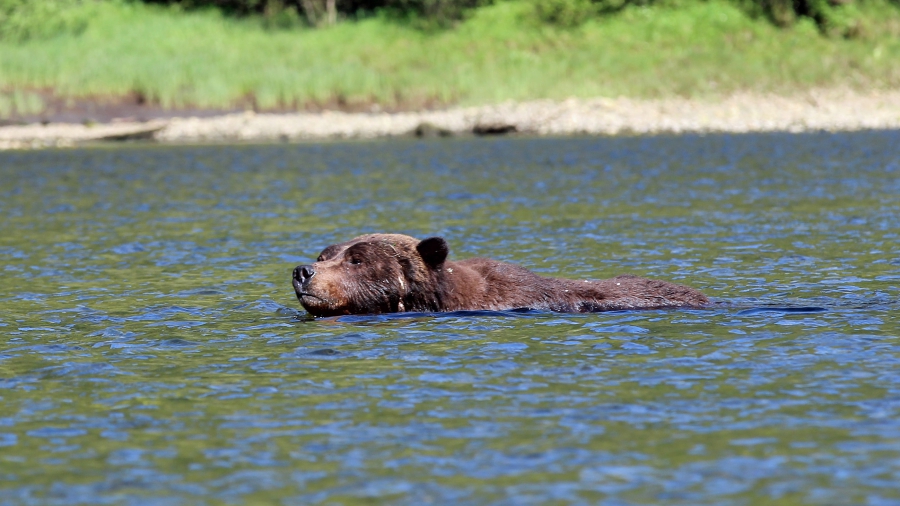 A grizzly local guides call Bo Diddley swimming across the estuary in pursuit of a female bear.

My guide here is Tom Rivest. "That is the sound that is called either chuffing or huffing. It sounds a little bit like bellows expelling air,” says Rivest. “The bears do that when they're stressed — or excited, or a little both — which they probably are."

The reason this bear is excited is that it's mating season and he's following a female and her two cubs.

Related: The Great Bear Rainforest is a model for how to save trees 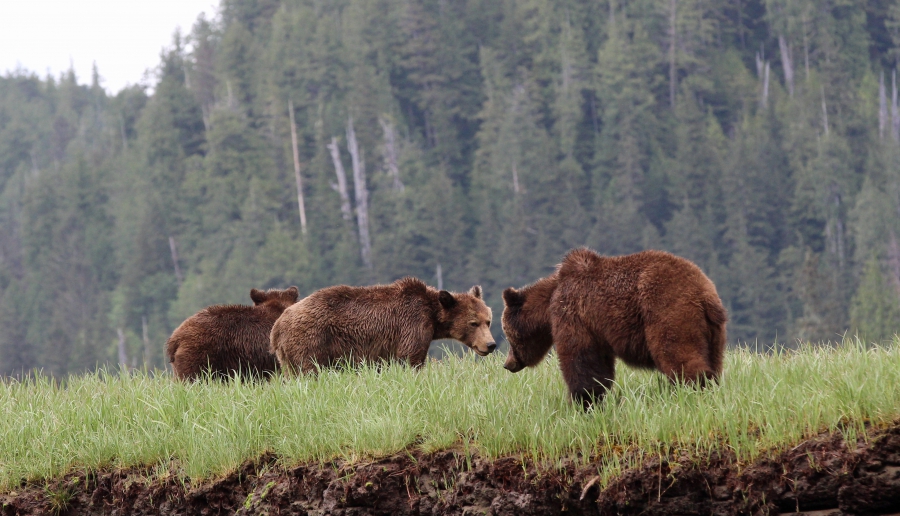 A female grizzly with her cubs on the Nekite River in the Great Bear Rainforest.

Rivest co-owns a floating lodge here and has been taking tourists to this spot for 15 years.

So he knows this bear. He calls it Bo Diddley. 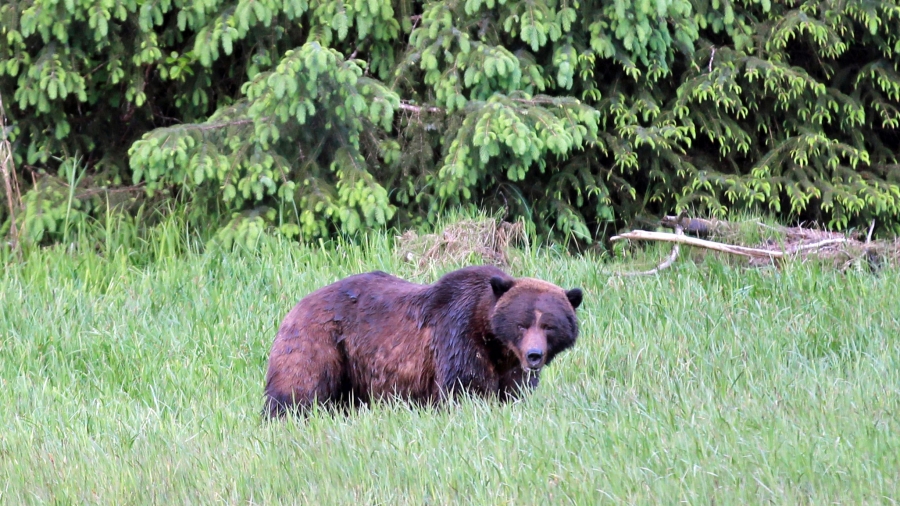 A male grizzly Bo Diddley's size would be a prime target for hunters..

"Bo and I go back 10 years,” says Rivest. “So he was just a little scrawny thing back then. And now he's quite large — probably an 800-pound bear."

Bears like Bo Diddley are a big draw for tourists paying top dollar to see them. But there’s another type of tourist looking for bears here. Before I came here, I called up another guide to see what draws his customers.

"They're world class as far as size and weight — and skull measurement."

Skull measurement is one of the criteria for guide outfitters like Peter Klaui.

He owns a hunting license for a huge swath of the Great Bear Rainforest and runs a guiding company. 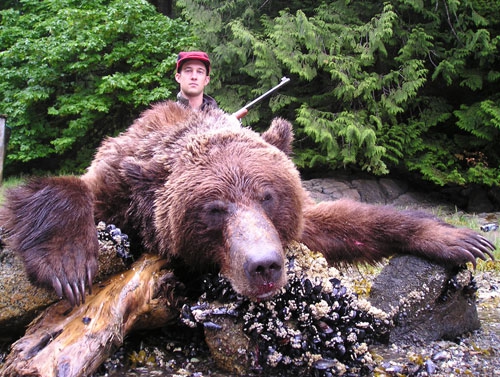 A grizzly killed by a trophy hunter in the Great Bear Rainforest.

Klaui's current license allows the hunting of 23 bears over five years, with a maximum of 7 per year.

Hunters pay him upwards of $20,000 for a trip here. But the hunting culture here may be winding down.

“Previously we just went and did it,” says Chris Genovali, head of the Raincoast Conservation Foundation.

In cooperation with Coastal First Nations, an alliance of aboriginal groups, Genovali’s foundation helps raise the millions of dollars needed to buy the hunting license tenures. They already own rights to about a third of the Great Bear Rainforest.

Genovali is no fan of trophy hunting in general, but he says it's particularly cruel to hunt grizzlies here because they’re out in the open, grazing in estuaries or following a salmon run.

"It's like someone walking into your kitchen or your dining room as you're eating your breakfast or dinner and shooting you,” says Genovali. “It's obscene. It's becoming viewed by an overwhelming majority of the public as a fringe behavior."

Genovali points to a poll in which only 10 percent of those who responded supported trophy hunting.

But there’s sort of a wink and a nod in conservationists’ deal with the government. In order to buy the hunting licenses, his group has to use them.

"We've had to show what's called commercial activity,” explains Genovali. Once a year, they take out tourists for a fake hunt.

“We take clients on hunts in our guide outfitting territories and we look for bears — the difference is we shoot them with cameras."

The BC government has agreed to an outright end to commercial grizzly bear hunting in some native territory in the Great Bear.

So the pressure is clearly on hunting guides. But Klaui says he isn’t worried about his business.

"Nothing has changed since that announcement and I don't expect it to change,” says Klaui. He says he’s still getting calls from hunters. But Klaui also says he’s planning to retire at some point soon and might sell his license.

And he might even sell it to a conservation or aboriginal group if they offered him the most money. "If they want to eliminate or slow down hunting of carnivores in the Great Bear Rainforest, they can do like anybody else and offer to buy out the business, just like on Wall Street.”

As for the grizzlies grazing on sedge grass on the Nekite River, they are safe from the crosshair of a rifle.

Rivest says that’s important because these bears have become used to humans.

"The biggest issue with viewing and hunting is that bears get used to being around people and they no longer have that innate fear so it is really not fair to hunt them." 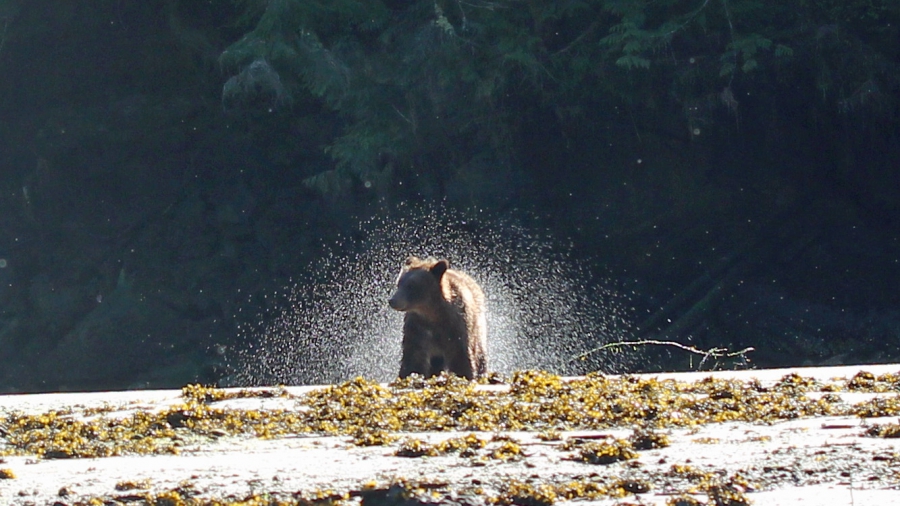 A grizzly cub on the shore of the Nekite River.

And that’s what the debate about hunting here really comes down to — fairness, and values.

The BC government estimates there are around 15,000 grizzlies in the province. And hunters kill between 250 and 300 grizzlies per year in BC.

So they’re not endangered. It's more that the social clock seems to be running out on commercial trophy hunting.

For the grizzlies along the Nekite River, humans certainly don’t seem to be a threat. 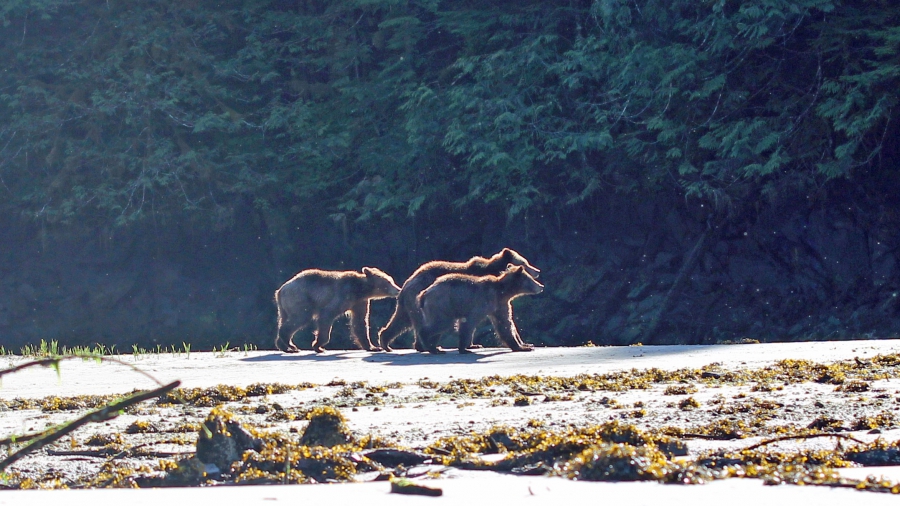 A female grizzly and cubs heading towards the trees to avoid a large male grizzly.

If Bo Diddley was afraid of us he didn't show it. He seemed more concerned with where that female grizzly was headed.