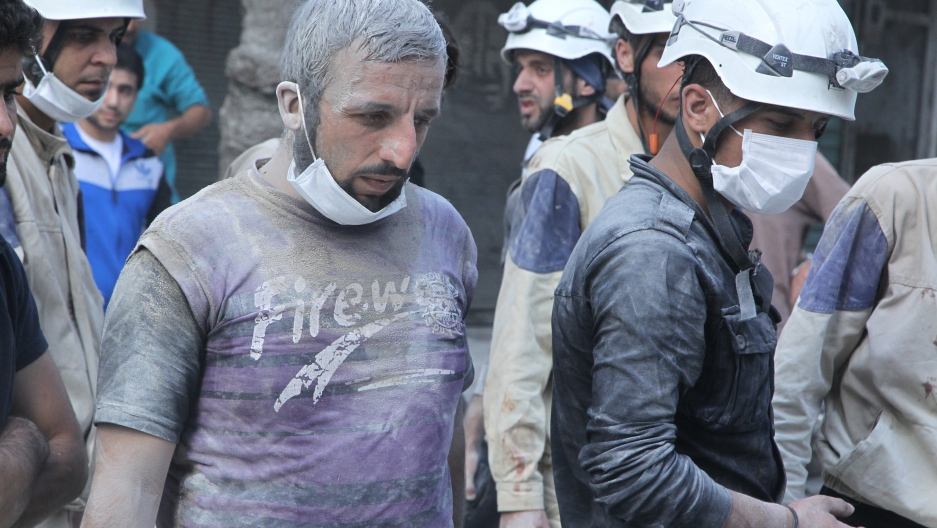 White Helmet volunteers search for survivors at a site reportedly hit with a barrel bomb in the Al-Shaar neighborhood of Aleppo, Syria, on September 17, 2015.

Bombs are raining down from the sky every day in Aleppo.

When residents hear the buzz of planes overhead, most dash for cover.

But a group of volunteers, known as the "White Helmets," continue to rush toward the destruction. And these days it seems their work just doesn't stop.

"The last few days were like hell," says 29-year-old White Helmet Ishmael Alabdullah. "We don't have any electricity in Aleppo city, the darkness is everywhere ... All that we have now is just bombing, bombing, bombing."

Aleppo has been bombed by Russian and Syrian war planes for months. In recent weeks, government troops have blocked most routes out of the city, trapping some 250,000 civilians in rebel-controlled areas of town. Day after day, volunteers there pull civilian bodies from the rubble left by airstrikes. Alabdullah says yesterday's work was especially sombre.

"We worked for more than 10 hours to pull out the bodies from under the rubble," he says. "We had 10 people who were killed, including three kids."

Alabdullah says his team uncovered an injured woman who was rushed to a nearby hospital and survived.

The White Helmets, also known as the Syrian Civil Defense, operate throughout opposition-controlled areas of Syria and are one of the few signs left of a once thriving civil society in Aleppo. Their presence buoys the spirits of many in the city, where Alabdullah says streets are often bare and markets are closed.

"When they bomb a place, they wait for us to get there, and they bomb again," he says.

Two of Alabdullah's colleagues were killed last month after war planes returned to the site of a bombardment where the men were working. One of the White Helmets died instantly in the second bombing. The other lost a hand and a leg, and he perished later in the hospital.

But Alabdullah says he and his colleagues are undeterred.

"When you see human beings suffering, you need to do something to help them," he says. "I consider everyone who is staying in Aleppo, all of them, are heroes."