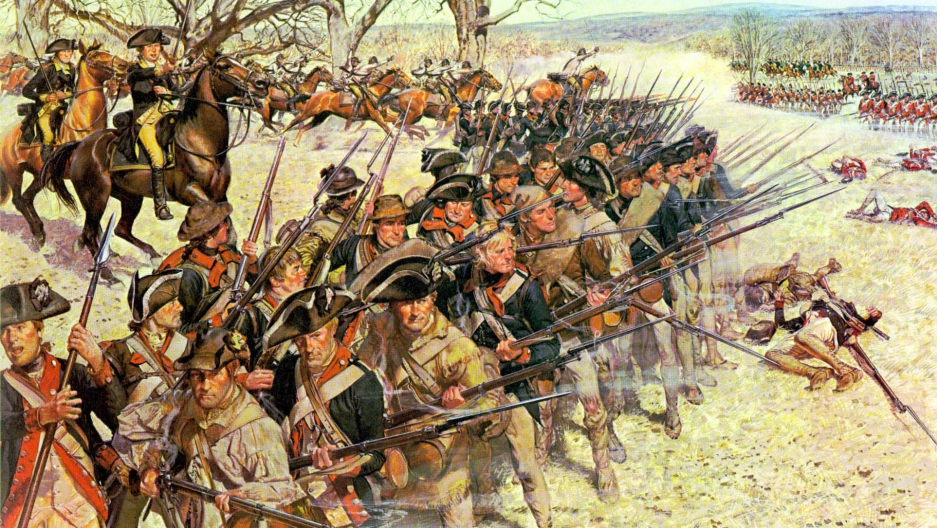 The battle of Guilford Courthouse, 1781.

Very few Americans question the idea that the military should be subservient to the nation's political leaders. But in many other parts of the world, generals and armies meddle in politics all the time.

So how did this come about?

Well, the principle has been there from the beginning. It's enshrined in Article II of the constitution: that the president is commander in chief, and thus a civilian is always in charge of the military.

But why? I always enjoy reminding people that the Founding Fathers were all very keen students of history, ancient and modern.

They were well aware that the biggest threat to a republic — and we must remember how unique the US was in the 18th century in choosing to not have a king — historically, was a military dictatorship.

The Founding Fathers wrote and spoke a lot about the city states of ancient Greece, but more especially about ancient Rome, which was a republic long before it became an empire. And they were well aware that the Greeks fell prey to their tyrants, and that the Roman republic was effectually destroyed by Julius Caesar — a hugely successful general with huge ambitions.

The US’ creators idealized a very different Roman general, Cincinnatus, who lived in the time of the republic. After winning a vital war, he simply retired to his farm — something deliberately emulated by George Washington when he said farewell to the army and returned to Mount Vernon.

The Founding Fathers had a couple of more recent examples in mind as well. Most powerful perhaps was the example in the mother country, England, which suffered several civil wars in the 1600s.

The Puritans won for a while and established a republic. But their most powerful general, Oliver Cromwell, quickly tired of the politicians’ dealings and established a military dictatorship. It was hugely unpopular, and many Brits who moved to the colonies carried with them an antipathy to standing armies.

Another example, not so well-known, is the use of a large standing army by the kings of France to stamp out democratic life and persecute religious minorities, mostly Protestants. Many of these Huguenots found refuge in America, including the ancestors of Paul Revere.

This gave them another good reason not to want a standing army. In fact, the US kept its peacetime military comparatively tiny until the start of the Cold War. It was barely tolerated. And the military knew as an institution it could survive only if it could inculcate this idea of subservience to civil authority in its officers.

Is the US exceptional?

Not in theory. Political and military thinkers going back to Sun Tzu in ancient China have advocated military obedience to civilian leadership. In theory, most of the world conforms to this notion.

But then power, as Mao Zedong wrote, grows from the barrel of a gun. Look at South America: The same ideals of the enlightenment that inspired the Founding Fathers were alive and well in the colonies of Spain, in Latin America.

They rose up in revolt in the generation following the American Revolution, and threw off Spanish control. But in country after country, successful generals used their soldiers to oust politicians. Some were idealistic and claimed to have the best interests of the country at heart, but many were simply ambitious for power. It's easy to imagine how something similar could have happened here, and this was indeed expected by foreign powers.

So, yes, the survival and success of the US republic, especially through those early decades, is pretty remarkable.

In other places, the military assumed disproportionate influence on government and policy. This was especially true in 19th-century Germany, where the militarization of the state helped lead to World WarI.

Many Americans, including President Dwight D. Eisenhower, feared something similar, with the growth of the military-industrial complex in the 1950s.

Yet another model is Turkey. Modern Turkey was founded by a general, Kemal Ataturk, in the 1920s, and the army was given a constitutional right to "safeguard" democracy. Hence all the coups — although of course that might now be changing.

So has the United States ever been close to having a military coup?

The only time America has stood on the threshold of a military takeover was at the end of the Revolutionary War, in March 1783. Most of the Continental Army was cantoned in and around Newburgh, New York, on the Hudson River.

There was a very real effort to get the army to march on Congress, which was threatening to disband the long-suffering soldiers without pay or pensions or the land they'd been promised. There was talk of seizing power, getting their dues, and even of proclaiming Washington king.

To his credit, George Washington would have none of it. He single-handedly talked the officers off the ledge at a dramatic mass-meeting on March 15 — which by coincidence is the Ides of March, the day that Julius Caesar was assassinated. In my opinion, this might well have been Washington’s greatest act of service to the United States.