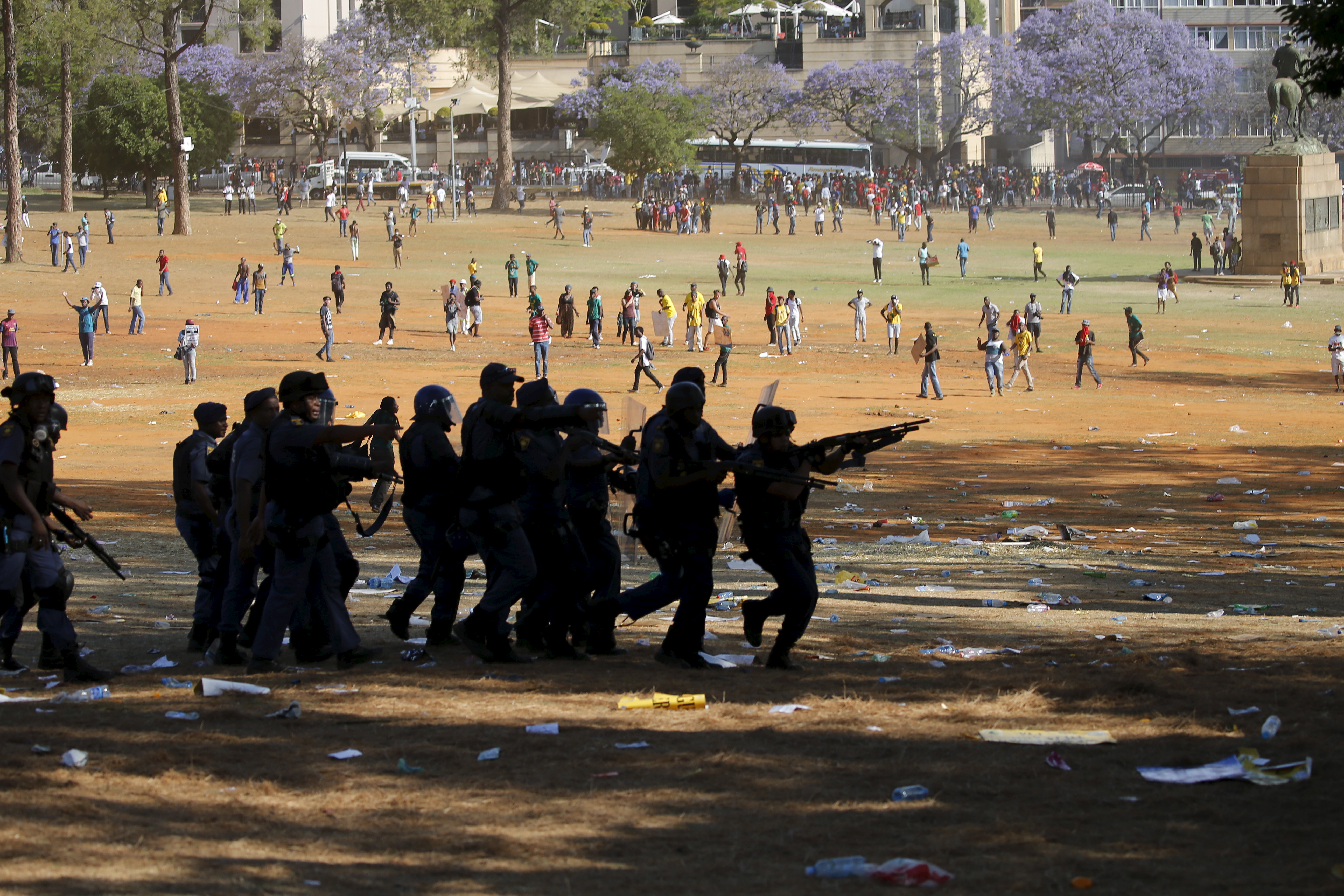 Protesters run as they are dispersed by police officers during a protest over planned increases in tuition fees outside the Union building in Pretoria, October 23, 2015.

In October, officials at the University of Witwatersrand in Johannesburg, South Africa, announced they would increase tuition by 10.5 percent, and many other universities followed suit. Students immediately launched protests, organizing around the slogan — and trending hashtag — #FeesMustFall: Exams were canceled, lecture halls closed and students clashed with police.

Why? What was all the fuss about?

“The #FeesMustFall movement is basically for students like myself who’ve struggled to make it through university due to financial constraints," says 21-year-old Gigi LaMayne. At first glace, she appears to be your average college student. But she also happens to be one of South Africa’s hottest rising hip-hop stars.

According to LaMayne, the #FeesMustFall movement is about much more than rising tuition costs, it’s about racial and economic equality in education.

“I just feel that capitalism is the legalized form of colonialism. It ‘just so happens’ that the majority of people in power, financial power, are white.”

Socioeconomic inequality is worse in South Africa today than it was during the years of apartheid, in both economic and racial terms. According to a 2015 study by the South African Institute of Race Relations, black South Africans make up only 16 percent of enrolled students in public universities, while whites make up 56 percent. Of those black students, only 50 percent are likely to graduate at all.

“Most black children are expecting to drop out at some point, because they can’t pay for it. I decided to join the movement when my mom was looking at an invoice, and was like, ‘I’m not going to be able to pay this by June, and I haven’t even finished paying off last year.’”

Gigi was born in 1994, the year apartheid officially ended, which makes her part of the so-called “Born Free” generation who have no direct memories of South Africa’s ruthless past.

“I think people presume there isn’t a struggle. Because we are ‘free,’ there’s this idea that we all need to think we’re equal, that we have a level playing field, and that’s not true.”

Gigi graduated at the top of her class despite all the turmoil, and on graduation day, she made a huge splash by dropping a protest song called, “Fees Will Fall.” With this song, Gigi joins a legacy of South African freedom fighter musicians, though she is one of the very few Born Free musicians to take a stand for economic and social rights.

Time will tell if Gigi is the leading voice of a new protest movement, or a lone voice in the crowd. Regardless, people are listening to her voice.

Editor’s note: This story is based on an episode of Afropop Closeups, a new podcast from Afropop Worldwide, a PRI-distributed radio program that has shared stories and music from Africa and across the African diaspora for the past 27 years. In these indisputably turbulent times, it is increasingly important for the media to amplify the voices of people around the world who address and denounce violence and divisions by religion and ethnicity.

In Afropop Closeups, producers are giving voice to musicians, scholars and people across the world who are responding to extreme situations including violence, war and cultural oppression: from war-torn Goma, Democratic Republic of Congo, to South Africa’s #FeesMustFall movement, to Jamaica, Haiti, Trinidad and Cuba.

Listen on Soundcloud, or on the Afropop Worldwide podcast feed.