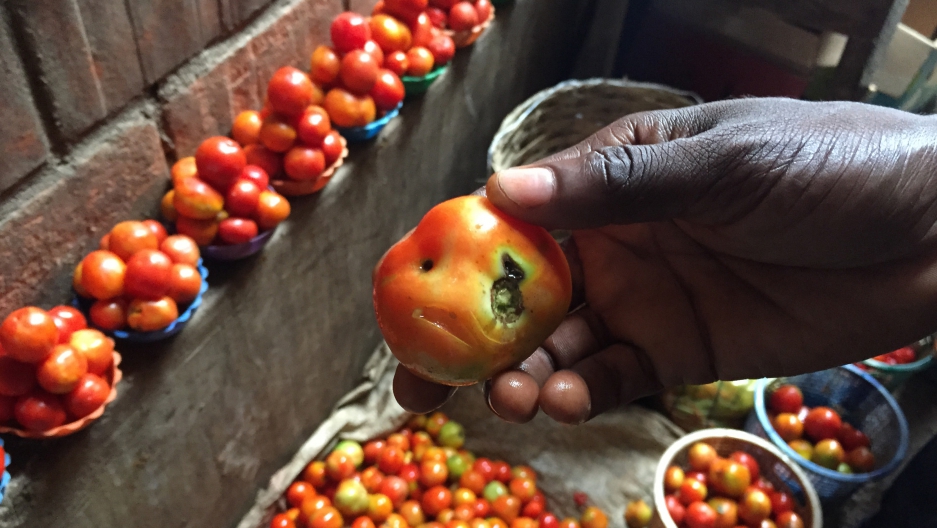 In a market in Abuja, a vendor named Abba shows me a puny tomato that was selling for 10 times the usual price. Some Nigerians have been calling tomatoes “Buhari’s gold,” after the president.

If you want to know how much Nigerians love tomatoes, all you have to do is listen to a few Nigerian love songs.

“You know Nigerian men, they like hiding their feelings. They don’t come out openly to tell you the way they feel,” she says.

Tomatoes are prized in Nigeria — you find them in jollof rice, in stews. Well, you do when they are available. Lare is a caterer in Abuja, and at a recent wedding her salads had no tomatoes.

Then she gets serious.

“But for real, it’s not funny at all. People can no longer eat stew.”

Initially, Nigerians suspected the tomato shortage was the result of someone trying to corner the market. But it wasn’t that, according to Biodun Claudius Cole, a crop protection specialist at the University of Ibadan. The culprit, she says, was a moth — Tuta absoluta.

While a new crop of bug-free tomatoes is starting to appear in markets, Cole expects the prices won’t fully return to where they were before the shortage.

That’s because of oil. Nigeria used to get most of its foreign currency from the oil sector, but with low oil prices and militant attacks in the Niger delta, the oil dollars aren’t coming in. Now, the country simply doesn’t have the dollars to buy things from abroad. For farmers, that means a struggle to import things like tractors and pesticide — and a reason to keep tomato prices up.

But with high prices of tomatoes, there might be a silver lining: Suddenly the national conversation isn’t just about oil, it’s about produce.

As Cole says, “This is one of the few times when scarcity of a commodity has generated so much attention to the point that it caught the attention of the president.”

And with this crisis has come a national soul searching about diversifying the economy, according to Von Kemedi, a former activist and consultant turned rice farmer.

“Everyone has been talking about tomato, but I think the tomato situation made us to reflect more on how little we are doing in the agricultural sector, at least compared to the size of our country and our potential.”

He says agriculture is a way not just for Nigeria to get foreign exchange through exports, but also become less vulnerable to the volatility of oil prices.

Kemedi says some of his friends now plan to move out of the oil economy into agriculture. And Kemedi himself says he’s not just planting rice — he’s planting tomatoes.