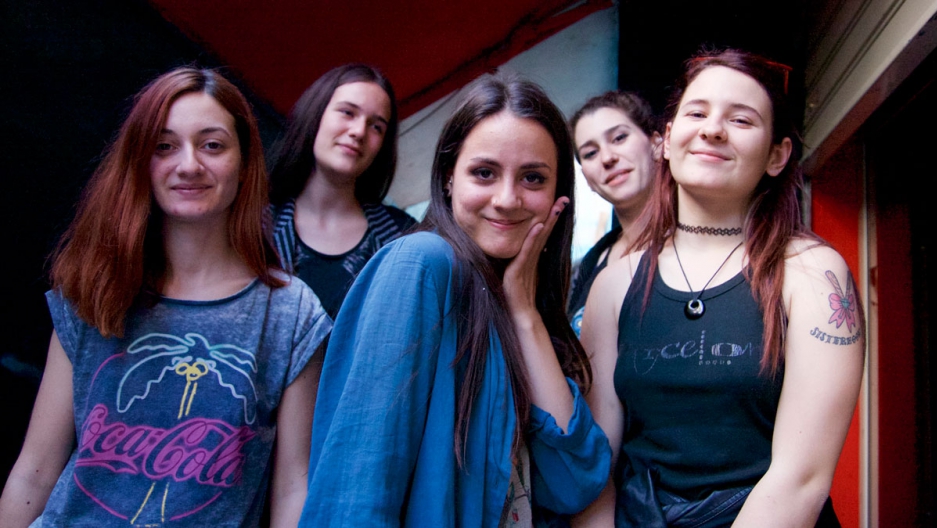 Uendi Pustina (R) and members of the band PreMenstrual Syndrome.

Uendi Pustina wears her personality on her left bicep. The tattoo says “sisterhood,” with an emblem consisting of a red bow, a diamond and two baseball bats. The bats have nothing to do with sports. They represent the 19-year-old drummer because she’s protective and aggressive — much like the songs she writes for PreMenstrual Syndrome, the feminist punk band based in Albania.

I met Pustina and her three bandmates over beers at their practice space, located amid a jumble of apartment buildings in central Tirana. The frenetic Albanian capital is a liberal place by the standards of Albania, but traditional attitudes about the role of women still cast a shadow.  For instance, it really bothers Pustina that her mother calls her “my little boy.”

“Just because I am extroverted and impulsive, and not really into studying for hours but into going out and drinking with friends doesn’t mean I’m not a girl or girlish or girly,” said Pustina, who studies chemistry at the University of Tirana.

The frustration from challenging what’s expected of young women comes through in their songs, which cover everything from sexism to sexting­. “The songs themselves are for angry girls telling the world to go F-” Pustina said, cutting herself off, laughing. “I can’t say that.” 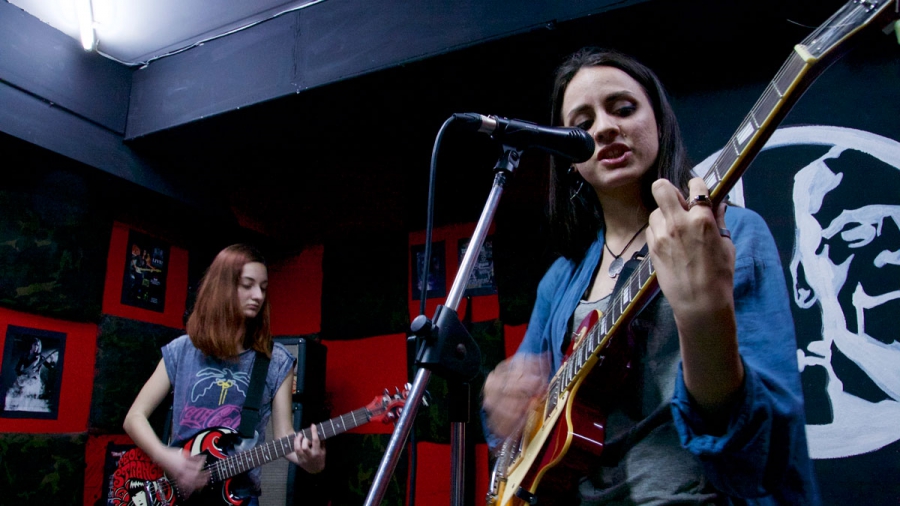 Members of PreMenstrual Syndrome at their practice space in Tirana.

The songs are all in English, in part, because the band believes it gives them more space to push the envelope. Albania is a fairly socially conservative country, particularly when it comes to sex.

Their most popular song, “$ugar,” taunts a misogynist. With low punchy vocals, lead singer Ersilda Hasa, the song asserts, “I’m the dyke stealing your girls,” and in the next verse says “hate me, rape me.” The song also mocks the size of the misogynist’s penis.

“Most of our target audience knows English, and they understand, and if we had our songs in Albanian, it would come off as vulgar, and they would really not listen to what we are saying,” said bassist Megi Adoni, 18, who recently left the band to attend college abroad.

In some ways that has worked to the band’s advantage by allowing them to reach more people. They’ve even performed on morning talk shows, which probably wouldn’t have happened if their songs were in Albanian.

Instead, as Pustina sees it, the band would be judged personally for the stories in the songs. That they’d be judged as wild and promiscuous.

But the songs are quite personal. “Damn Relationships,” is based on Pustina’s own experience of being involved with a guy who had a girlfriend. She said it would be too much for an Albanian audience hear the song in their own language.

“Being a girl talking about sex, talking about an affair with a guy in a relationship, would be like, whoa,” she said. “It’s too much controversy. If you want to work with these people you should do a bit of controversy, but still not to traumatize them.”

It’s a bit of a catch-22 — a choice between cushioning the message or having it lost in controversy. And the message is pretty simple: young women should be able to talk about stuff like sex and infidelity just like men.

At the end of the interview, I mention to the band that this story may force the issue on them. Stories about Albania in foreign media are usually translated and republished online.

Pustina shrugged. “If there are people, including our parents, who may be angry at us. Eh. We’ll get over it.” Pustina said. “Yeah. Plus, it will be better for people to actually know about what we’re saying.”

Ultimately, English opens the band up to a global audience. And as the band points out, Albania isn’t the only place that has a problem with sexism.