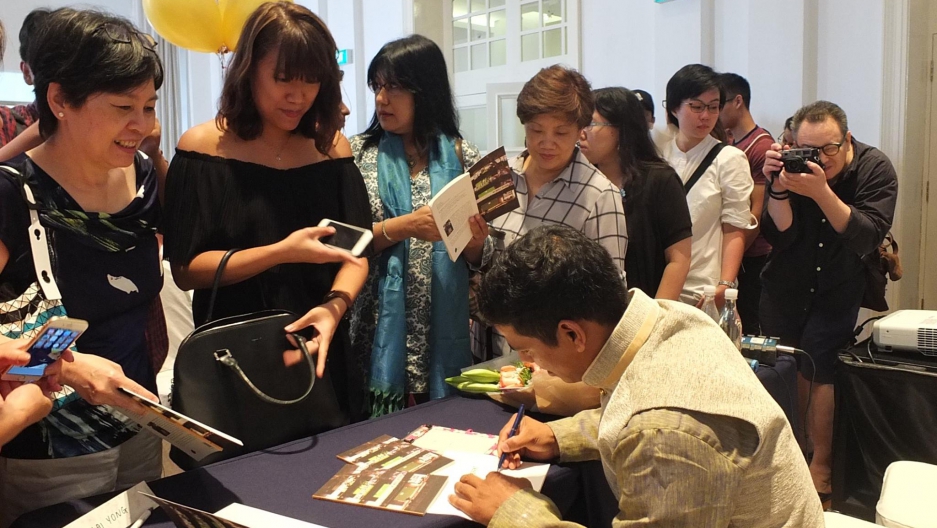 These are the first lines of the title poem in an evocative collection of verse by Md Mukul Hossine, a Bangladeshi construction worker in Singapore:

Those sparse lines have helped turn the 25-year-old day laborer into an overnight literary celeb.

Newspapers in Singapore and Bangladesh have profiled him, and the book has gone into a second printing after a modest run of 1,000 copies quickly sold out. “My poetry is just like my feelings, my home and my mother and my country and my village, all those things,” Hossine said in an interview. It is also, he acknowledged, a “really, really big opportunity for my life.”

From Sicily to Singapore, we live in an age of migration. But the stateless are often voiceless too. The stories of migrants that emerge in the news and in documentaries are rarely told in their own words, and even more rarely through poetry.

Hossine’s journey to Singapore started the way it does for many poor Bangladeshis. He was drawn to the Southeast Asian economic powerhouse from rural Bangladesh, arriving in 2008 with financial assistance from his father, who took out a loan to make the trip happen. Small, tidy, and tightly controlled Singapore — a city-state with the population of a medium-sized American city — is the opposite of heaving, chaotic Bangladesh, one of the most crowded places in the world.

The 18-year-old Hossine entered the construction sector, where he could earn about $600 a month, a small fortune back home, even though he had little relevant experience. He plastered. He painted. He mixed cement. But in his free time, he wrote poems.

He began writing when he was just a teenager, back when he still allowed himself to imagine a future in the arts.

So he worked and worked, finding time to dabble in literary distractions, poking around at readings and other events, making connections and becoming something of a fixture on the Singapore scene over the years. He paid acquaintances to render his original Bengali verses into English. His big break came while volunteering as a translator at HealthServe, a local clinic that assists migrant workers. One of the doctors was so impressed with the poems he approached a publisher, Ethos.

“We read the poems, and despite the possible lapses that happen in translation, the voice of Mukul — sometimes anguished, but oftentimes and admirably hopeful — struck us,” Kum Suning, an editor at Ethos, said. “We are different, but these states of emotion in his poetry are universal.”

Anthony Waugh Koh, the owner of a bookshop called Booktique, said when regulars at the store who bought “Me Migrant” came back they described the poems as “heart-wrenching.”

In the editing process, Ethos hired a Singaporean writer named Cyril Wong to try to sculpt or “transcreate” the rough English into a more polished form, without losing Mukul’s voice.

“What I hoped to retain in my adjustments throughout was the poet’s keen sense of isolation and plaintive mode of protestation, simultaneous with a longing for loved ones and homeland in that general tendency to praise the past when facing the difficulties of the present,” Wong wrote in his introduction.

You can hear that plaintiveness in the rest of "Me Migrant":

Dawn to dusk then dawn again

Bearing sighs and a cry

Be careful: no one here

To see and know such pain 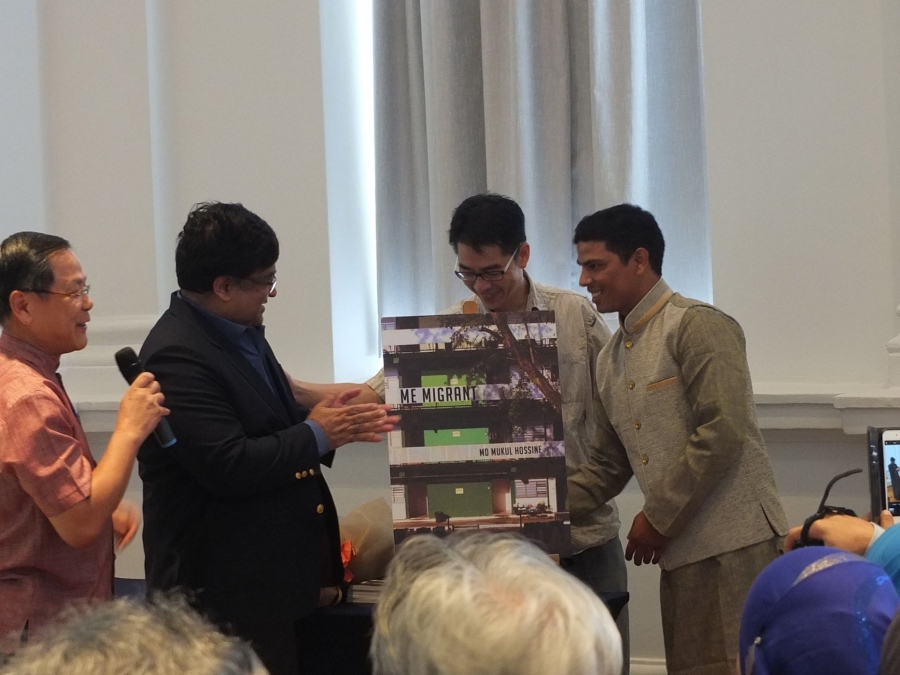 Md Mukul Hossine holds a poster depicting the cover of his book of poems, "Me Migrant."

You can also hear it in “Grandmother,” a poem about missing childhood and its comforts, especially from a distance:

“No one is there to wake me up in the morning

No one tells me to come quickly, the puffed rice treats are ready

I spend the afternoons with great difficulty and loneliness

Those fireflies at night do not seem to dance about anymore

They are no longer my friends, they fly away when I reach for them.”

Hossine’s immediate goals are more practical than writerly — though he wouldn’t mind being a “famous writer” sometime in the future. For now, he needs to save up enough money to take vocational classes that will get him a better-paying job. He’s hoping to qualify for a better work visa in Singapore’s tightly controlled labor market.

Eventually, he said, he hopes to become a Singaporean citizen. “And I want to make my family proud,” he added, as if he hasn’t already.