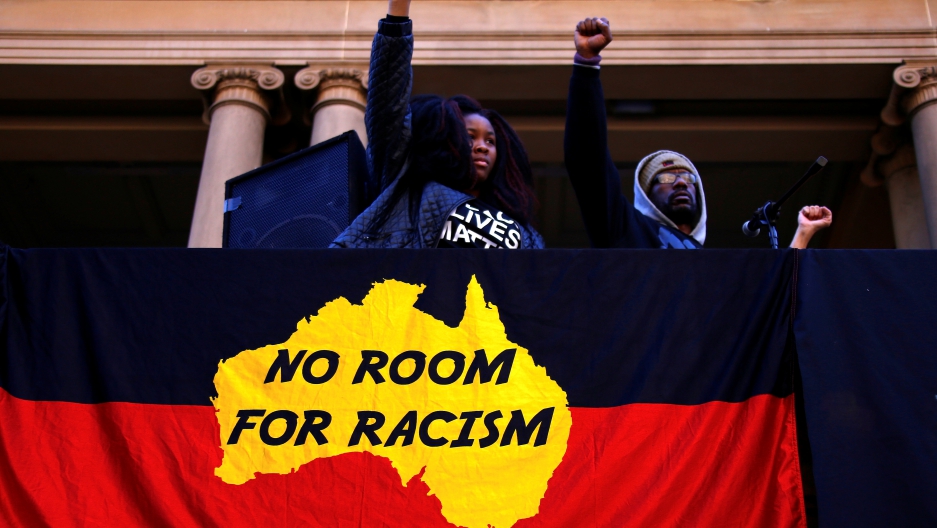 Protesters raise their fists during a rally organized to show support for the 'Black Lives Matter' movement, following recent police shootings in the US, in Sydney, Australia, on July 16.

The videos of recent tragic shootings are disturbing and hard for anyone to watch. But it can be even harder if the person in the video looks like you.

In fact, researchers say that experiencing, witnessing, or even just hearing about discrimination could result in anxiety, depression, psychosis, or PTSD.

And early evidence suggests that racism can boost heart rate and blood pressure, and ultimately influence life expectancy in people of color.

“We used to think about problems like PTSD as being caused by a single traumatic event and what we're now starting to understand is that often it's an accumulation of experiences that results in traumatization,” says associate professor of psychology and brain sciences at the University of Louisville, Monnica Williams. “Something like racism, even if it's at a very low level, if you're experiencing it all the time, it can accumulate and cause symptoms very similar to PTSD such as depression, anxiety, nightmares, avoidance and so forth.”

Those who experience microaggressions and other racist interactions can be affected, but Courtney Cogburn, an assistant professor at Columbia University’s School of Social Work, says even just watching other people experience racism can cause health problems.

“Vicarious exposures to racism, which makes exposure to the media particularly important given the degree to which your average adult accesses media on a given day, if they're being exposed to these types of stressors, it is having an impact on processes that can have implications for health,” Cogburn says. “That vicarious exposure to media becomes an important source of stress for us to understand.”

Willams says the effects of exposure to racism can manifest itself in a variety of symptoms including anxiety, anger, sadness, hopelessness, and impaired work performance.

“When you see people like yourself, people who remind you of your kids, or loved ones being victimized at the hands of people, often who are supposed to be protecting us — that’s very frightening,” Williams says. “When it happens over and over to people that you know and love, that’s going to have an effect.”

There are, however, things people can do to combat the negative effects of experiencing racism. Williams has been studying these coping mechanisms in her lab.

“One thing we found is that some people tend to take a more challenge approach to it like, ‘OK, this other person is believing stereotypes about me — what can I do to help change the way they think of me and my whole group?’” Williams says. “Versus negative coping strategies, which could be things like denial, or substance abuse, or just internalizing those things and feeling bad about yourself.”

Cogburn and others have also been working on projects to help combat racism and the ignorance that feeds it.

“We're really interested in whether we can sort of capture more complex and subtle manifestations of racism in virtual reality to get people who don't normally encounter these types of experiences the opportunity to walk in someone else's shoes,” Cogburn says. “The premise here is their experiences with racism are so far removed from some people's reality that they don't understand that, they don't get it. And so we're wondering if we can leverage this technology to help people understand it in a way that they may not be able to really understand in their day-to-day lives.”