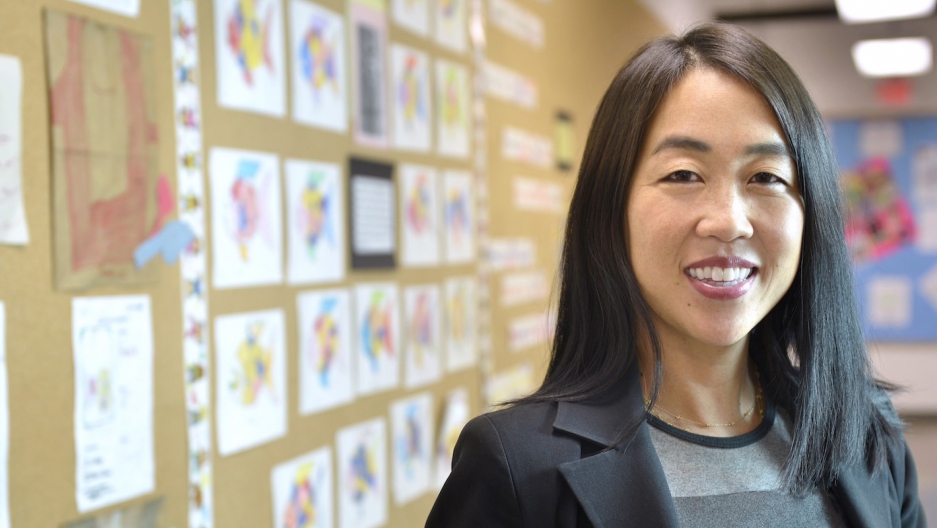 The face of left-wing ideals, for many in the US, is an elderly white man who recently ran for president.

But that man, Sen. Bernie Sanders of Vermont, relinquished his candidacy to Hillary Clinton during the Democratic National Convention in Philadelphia this week. And as the convention was going on in her city, a young Asian American woman was bringing attention to progressive agenda items such as public education, urban poverty and help for immigrants.

Councilwoman Helen Gym works on these issues at the local level year-round. During the DNC, she's participated in several panels and marches about improving quality of life for immigrants, poor people and kids in urban centers.

Gym says she doesn't look to the top of the power pyramid for solutions. She'd rather see change in individual communities first.

"I came out of grassroots mobilizing within communities that aren't really connected with power," Gym says, "[that] don't feel particularly welcomed in a lot of political spaces, and so what we've had to do is super-organize."

Gym mentions working to end deportations for Cambodian Americans; changing the justice system to avoid mass incarceration; and allowing parents to rely on public education for their kids. She was busy at the Wells Fargo Center during the DNC, but says doing her usual work — the grassroots variety — is what makes her feel like an American.

"I think what it means [to be American] is to really be incredibly connected and engaged with the communities that we're part of. And I'm part of an immigrant community, an Asian American community, a public schools community," she says, in answer to my question. "I can watch what I see from Wells Fargo and all that kind of stuff but the energy that I get comes from all the people who are working on the ground."

But in Gym's view, that community-level progressive energy was represented at the DNC.

To see the rest of the answers to "What does it mean to be an American?" follow us on Instagram

"Onstage were Elizabeth Warren, you had Keith Ellison, the first Muslim congressman, introducing Bernie Sanders, who's a socialist, introducing the first female president," she notes.

"I think what we're seeing is the rise of a new progressivism in the US in our national politics that's largely been driven and shaped by local grassroots building on the ground," she says.

And she says one way Philadelphia is helping to shape national policy is through the city's treatment of immigrants.

"[Philadelphia is] a city where we've reversed five decades of population decline in large part because we have a vibrant immigrant community here," Gym says.

A sanctuary city, Philadelphia is a beacon for undocumented immigrants in the state of Pennsylvania. Gym says it's not an accident.

"It's not just because it's a progressive ideal or something that somebody adopted out of a platform idea," she says. "It is a compact and a promise with our immigrant communities that they do not have to fear our police, that they should not be deported without due process."