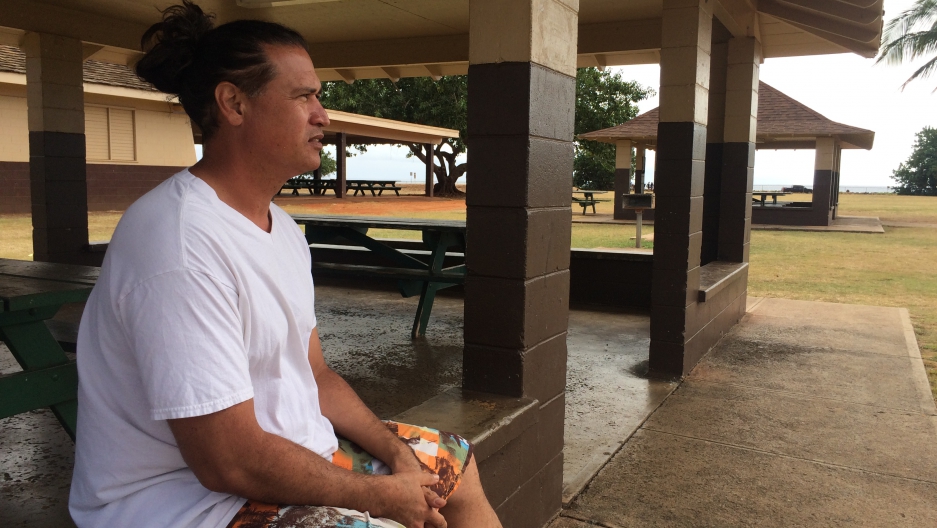 Keao NeSmith sitting in the cinderblock pavilion where Niihau parents marched in protest after pulling their children out of the local public school. Niihau elders taught their kids in these pavilions while they worked to get their own charter school going.

Hawaiian is often offered up as a language revitalization success story, a model for other endangered languages to follow.

The decline of the language can be traced back to the end of Hawaiian royal rule. After a coup that dethroned the last Hawaiian queen, a law was enacted barring Hawaiian from being used in schools. That law stayed on the books for 90 years, contributing to the decimation of the language. By the 1970's, Hawaiian was mainly spoken by elders. In short, it was dying — quickly.

Then in the 1980s a group of language activists began a serious effort to save Hawaiian. They formed a Hawaiian Lexicon Committee to coin new Hawaiian words for computer, cellphone, even a new word for native speaker. And most importantly, they started Hawaiian language pre-schools. Those initial pre-schools have mushroomed into many across the island chain. Today, the largest group of Hawaiian language learners are children.

This is all positive. The language is alive, and it’s surviving, thriving even. But language revitalization isn’t so simple. While activists are reviving the Hawaiian language, opening up pre-schools, teaching thousands of second language learners, there was and still is a small group of native speakers who have never lost the language, a group of native Hawaiians from the island of Niihau.

Niihau is a small, privately owned island just 17 miles off of the coast of the island of Kauai. 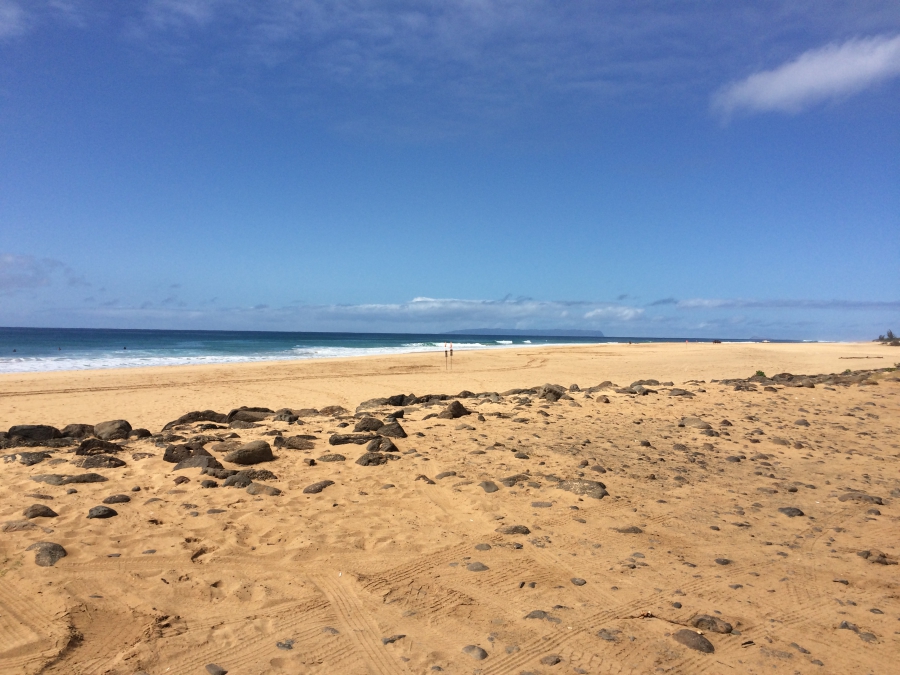 The privately-owned island of Niihau can be seen in the distance. It's just 17-miles from the island of Kaua'i. This is home to the last group of native Hawaiian speakers in the island chain.

This week, The World in Words takes a trip to the Hawaiian Islands to meet some of Hawaii’s native speakers.  How have they managed to hold onto the language?  What struggles do they face going forward?  Is the variation of Hawaiian that the Niihau speak different from the language spoken by the activists leading the Hawaiian revitalization movement?

2:30 The Niihau are a small group of Native Hawaiians who have never lost the language

2:35 Singer Kaleohoomana Kaohelaulii or “Kaleo” for short is a Niihau teacher of Hawaiian culture on the island of Kauai.

3:00 Niihau, not to be confused with the Mandarin word for “hello” is actually the name of a privately-owned island off of the coast of Kauai

3:56 The island of Niihau was actually purchased in 1864 by Elizabeth Sinclair, a woman from Scotland from the Hawaiian royal family

4:15 When Sinclair purchased the island, there was a whole community of Native Hawaiians living there.  They still live there.

4:44 Hawaiian is the language of the island and the island’s isolation helped preserve the Hawaiian language there

5:17 The island is very undeveloped, not a whole heck of a lot on the island besides a school and a church

6:43 Nina meets Keao NeSmith at a park in the town of Kekaha on Kauai

7:28 Keao learned to speak Hawaiian from his grandmother

8:00 Growing up in Kekaha many of Keao’s neighbors were Niihau and he grew up hearing his friends speak Hawaiian

8:30 While Keao was becoming bilingual in both English and Hawaiian, he watched as his Niihau friends suffered in school because of their language

9:24 Niihau families take matters into their own hands and pull their kids out of the public school

9:50 Laua‘e Kanahele remembers the day that Niihau parents pulled their kids out of school and marched to the park

11:35 Niihau parents applied to become their own charter school and get help from language activists at the University of Hawaii in Hilo

12:34 The question of English creates a painful divide within the Niihau community

14:35 What happens when second language learners become the majority speaker? Where does that leave native speakers?

16:58 Keao was a member of the Hawaiian Lexicon Committee when he was a student at the University of Hawaii in Hilo

18:30 The Hawaiian word for computer

19:00 Kanahele is amused by the new Hawaiian words made up by the Hawaiian Lexicon Committee

20:30 Larry Kimura, the “godfather” of the Hawaiian Revitilization Movement says that the original Lexicon Committee tried to get input from native speakers

21:50 so many words needed to be created that now, second language speakers are coming up with new words on their own

22:00 Keao is annoyed by new words created by second language speakers like the word for “cute”

24:00 Patrick and Nina discuss the tensions between second language speakers and native speakers

27:00 Evolution versus engineering of a language

28:30 English’s influence over the Hawaiian accent

29:00 Hawaiian greeting at the Honolulu Airport