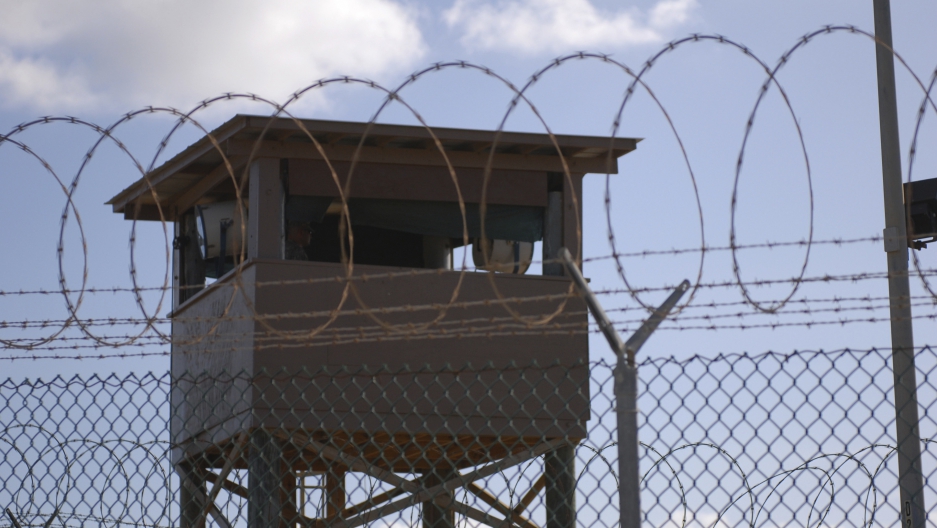 A soldier stands guard in a tower overlooking Camp Delta at Guantanamo Bay naval base December 31, 2009.

The trial against Guantánamo Bay detainees continues, despite President Barack Obama's stated desires to close down the prison. Now, the attorneys for the five accused terrorists want to bring an international observer into the process.

WGBH’s Arun Rath is at the court in Cuba. He says the defense filed a motion to call the UN Special Rapporteur on torture as a witness. “But not just that,” he says. “They want him to come down here and inspect Camp 7. This is the top secret prison here in Gitmo that houses the 'high value' detainees, including the five men on trial for the 9/11 attacks.”

Rath says they also want to have the UN Special Rapporteur interview all five of the accused. “It seems they’re hoping he can settle this question as to whether the conditions under which they’re currently being held constitute 'cruel, inhuman and degrading treatment,’” says Rath. “[The defense team says] that these men are still being abused in ways that violate international standards, as well as the convention against torture, which the US has signed.”

So have we learned anything new about the treatment of these men, and how the court will be handling that information?

Rath says yes. “We learned a bit more about the evidence related to one of the CIA black sites where these men were interrogated,” he says. “These were locations in various countries like Afghanistan where the men were subjected to abuses, including torture. The defense is angry that evidence from one of these black sites was recently destroyed, and because of some recent declassification we’ve found out a bit more about that — one attorney described it as a ‘torture chamber.’ And we know the destruction of evidence involves removing ‘fixtures’ — ‘contraptions or devices’ apparently involved in the torture.”

But the most interesting part for Rath is what he learns in passing. And that, as he says, is “how far the government still is from providing the defense the information they’re required to mount their defense."

“The prosecution is processing all this material, mountains of documentation related to the treatment and torture of the detainees — they’re basically vetting it so it can be presented in a way that doesn’t expose classified information,” he says. “They then pass that on to the judge for review, and he then passes it to defense.”

But this next part is key. It’s what Rath caught in passing, and it’s critical to the case.

“The judge said this week that he’s received about half of that material — and he’s sent ‘virtually all’ of those documents back to the prosecution for additions — basically indicating that what the prosecution has provided so far is inadequate.”

So Gitmo will almost certainly be running when Obama leaves office. And the decision to keep it open or closed will be a decision for the next president.