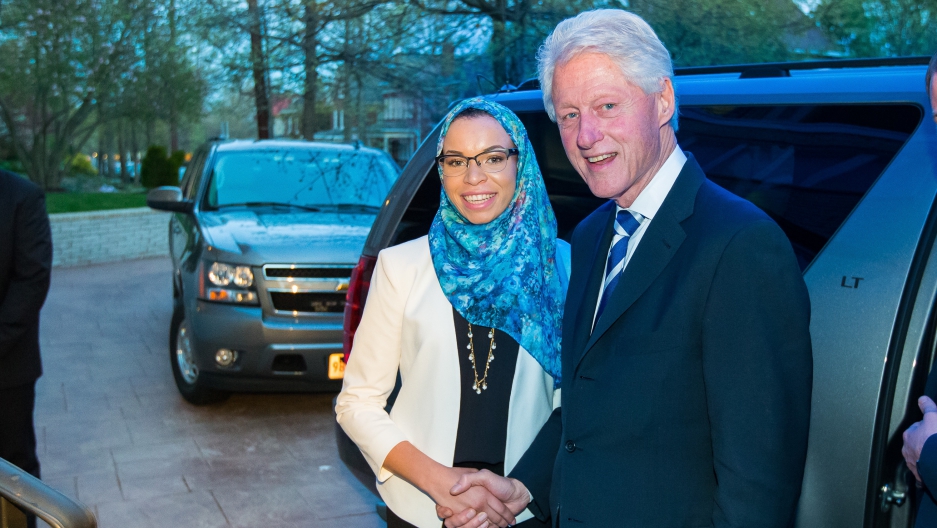 On April 13, 2016, barely a month after I started observing hijab, I attended an event called "Conversations with Bill." It was a fundraiser for Hillary Clinton, one of the first I had attended, and I was so excited to hear from the former president.

Unfortunately, before the event could even get going I was referred to as a terrorist by a comfortably bigoted attendee. I already felt out of place. I was one of the only black people present, one of the youngest attendees, and the only woman wearing hijab. My eyes filled with tears and I asked one of the organizers if I could attend another fundraiser at a later date.

In the midst of all of this, I had also misplaced my coat. As I walked out, a volunteer assured me that it would be retrieved. He was confused that I was so upset about a jacket. I finally told him about the anti-Muslim bigotry I had just experienced, and he apologized profusely and assured me he would make it right. I drove around the area for a while waiting to hear if my coat had been found, calling my mother and some friends as I tried to collect myself.

Right when I was about to give up on the DC political scene as a whole, one of the event organizers called me.

It turned out that upon hearing about the altercation, President Bill Clinton wanted to speak with me. He made a point to apologize to me personally and reassure me that anti-Muslim bigotry has no place in the United States. The lengths that not only he, but the entire Hillary for America campaign went to in order to resolve this incident made an indelible mark on me. I felt like I mattered — and I felt like Hillary would work to make a more perfect union.

And so I had high hopes for Bill’s speech. But they were let down.

I was particularly shaken by the former president's words about black people and Muslims, as a person who exists at the intersection of these identities.

Near the end of his more than 40-minute speech, he said:

“And so I tell you, if you love this country, you're paying taxes, and you’re obeying the law and you’d like to become a citizen, you should choose immigration reform over somebody that wants to send you back. If you’re a Muslim and you love America and freedom and you hate terror, stay here and help us win and make a future together. We want you. If you’re a young African American disillusioned and afraid, we saw in Dallas how great our police officers can be, help us build a future where nobody is afraid to walk outside, including the people that wear blue to protect our future.”

Yes, Bill Clinton, I am a Muslim and I do love America and freedom. But why is “terror” even part of this conversation? The reason the attendee at the Hillary Clinton fundraiser felt comfortable referring to me as a "terrorist" is because we continue to have a narrative of “guilty by association.” Muslims must be mentioned outside of the context of terrorism and uplifted within the contexts that we live in daily. I was disappointed that the kindhearted, inclusive, and caring Bill Clinton did not come across as he made these statements.

Yes, Bill Clinton, I am a young black person living in America. Yes, I am disillusioned and, yes, I am afraid. Yes, I saw in Dallas how great police officers can be, but I also experienced being tackled, trampled, and arrested by Baton Rouge SWAT officers while standing on private property at a peaceful protest. Rampant police brutality — and the refusal to acknowledge its existence and reform law enforcement culture — scares me even more.

Bill Clinton, please do not demand that young black folks build this future.

I recently spoke at a panel where children ages 10-16 implored the speakers for a multi-step formula to ensure that they can get home safely after interacting with police officers. Seeing recent footage of a man lying in the street with his hands raised get shot for no reason, I realized there is nothing I can say to these children that will lessen their very justified fear.

Even in light of her husband’s faux pas, seeing Hillary Clinton's dedication to include the “Mothers of the Movement” at the DNC on Tuesday night, I have hope for the policies and legislation we will see under a new Clinton administration.

Blair Imani is an activist and the founder of Equality for HER.