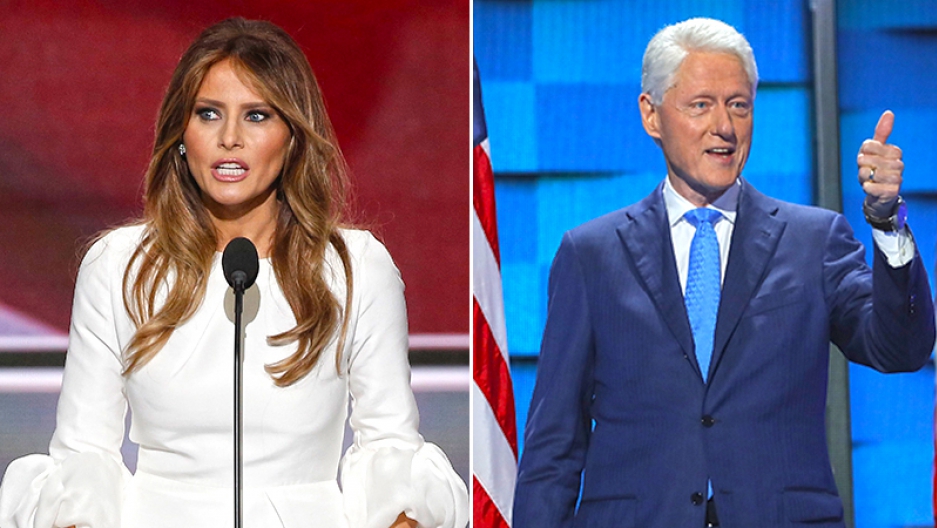 A former model from Slovenia or a former president of the United States will almost certainly be the next first spouse. It's a role that can be both thankless and invigorating.

Ask former relationship columnist Quentin Fottrell, now a financial journalist in New York. Back in Ireland, dispensing advice, he was known as the Agony Uncle. And he has some counsel for whoever winds up being the other half in the White House.

On Bill Clinton: "I think he'd be great. He seems to be really comfortable in the role of first spouse. He's somebody who doesn't seem at all insecure with this role and will be the last person to feel emasculated by it."

Fottrell has heard Bill Clinton speak in person twice. And he's always been impressed: "He's almost like a cabaret artist at this point. He can really spin a yarn. Like a comedian with a list of stories or jokes, he can just roll them out and adapt them to whatever speech he's giving."

On Melania Trump: "I think definitely [she] would be a much more traditional first lady — and I don't mean Eleanor Roosevelt. I mean more like a Nancy Reagan in terms of fashion and probably more like a Laura Bush in terms of whether she has opinions that differ from her husband. She has said before that she wished he'd be a bit more presidential. I think she'll be somebody who's in the background."

Melania Trump has said she would like to take a role helping women and children and Fottrell believes if she becomes first lady, her role will be symbolic and visual. "I think she'll be more of a Princess Diana where in the 1980s and early 1990s there was always that 'And finally...' segment on the news where Princess Diana would turn up like a silent movie star and not really say much, but be photographed and filmed hugging children and going out and greeting people."

Fottrell is fairly indifferent about the prospect of Bill Clinton becoming the first first gentleman. "I think the world is changing and I think people are really prepared for a female president and in terms of a male first gentleman, if it happens, I don't think it's going to be a big deal."

Fottrell's advice for Bill Clinton: "Every first spouse makes the role their own and I think he won't be encumbered by anybody's expectations of what a first spouse should be. He's also an ex-president. He's not going to be choosing the china. He's not going to be redecorating the White House, like Nancy Reagan. It's a very different time for a very different role and a very unique first gentleman."

Fottrell's advice for Melania Trump: "Try to break out of Donald's shadow and become more of your own person. She's taken a back seat during the campaign and she's really allowed Ivanka to be the de facto first lady. We don't know who she is. We don't know what she's capable of. There's probably a lot more to Melania Trump than meets the eye and I think it would be good for her to step out of his shadow and speak up more, sort of the opposite advice I'm giving Bill Clinton."